Black and dark gray paint graffiti was found on the outside and inside of the restroom nearest to the children’s playground at Tidelands Park. It is unknown how long the graffiti has been there, but the paint had dried when the crime was reported.

2/2/19: Driving Under the Influence of Alcohol – Misdemeanor near 1700 block of Glorietta Plaza 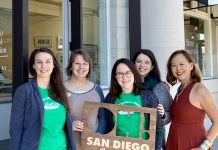