“RBG” – The Truth about Ruth 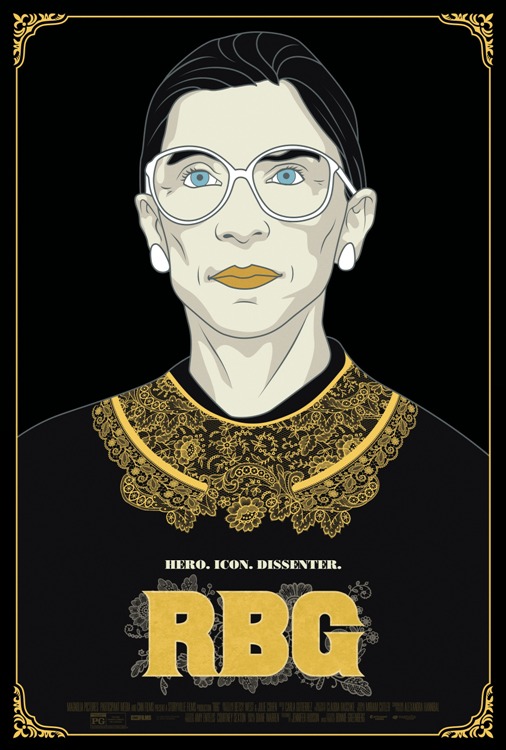 From directors Julie Cohen and Betsy West comes the documentary that explains how a diminutive eighty-five year old woman from Brooklyn, New York became an iconic Supreme Court Justice referred to in pop culture as The Notorious RBG. Prior to watching the movie, I knew the pint-sized judge, frequently parodied by comedienne Kate McKinnon on Saturday Night Live, was well-known for leaning toward more liberal views, but I didn’t know too much about her personal life or her career path that lead her to our nation’s highest court.

Pop quiz for all of you considering seeing RBG! Which of the following are true?

B. She loves opera, is an infamous flop in the kitchen, and regularly does planks and push-ups.

C. She has an impressive collection of fancy jabots (collars) that have been gifted to her.

D. All of the above.

E. None of the above.

I won’t tell you the answer, of course, because it’s on you to discover the answers yourself, but I will say that there are so many interesting facets of Ruth Bader Ginsburg that I learned throughout the film. I had no idea how influential our 107th Supreme Court Justice has been in terms of arguing against gender inequality and gender discrimination, and was so in awe of the barriers she broke down herself as she became a lawyer in an era where women weren’t welcome in the profession.

I loved listening to the segments where we as the audience got to listen to her articulate and powerful yet slow and gentle speech. She’s a force to be reckoned with, and as a woman, whether conservative or a liberal, I now recognize that a lot of the “privileges” we enjoy today were made possible because Justice Ginsburg wasn’t afraid to fight for gender equality. She saw the big picture of what women deserved well before it even occurred to many women to even dream of it.

One aspect of the documentary I especially enjoyed was how RBG’s marriage was highlighted throughout. (Wow! Who wouldn’t want that kind of love story? Any man who thinks smart equals sexy is my kind of man!)

My friend Dani, who also knew little about RBG prior to the movie, joined me, and afterwards she reflected, “It was a wonderful documentary. I would recommend that everyone, regardless of their political views, should see it because she’s such a rich part of modern day history when it comes to so many pivotal court cases, where the verdicts she influenced as a lawyer and then judge shaped the direction in which our nation headed.” (It should also be noted that Dani, who admittedly is not into following politics extensively, commented that it was a bit boring at times.)

Personally, I already thought highly of RBG, but after seeing this documentary, my respect for her has turned to true admiration and genuine appreciation. Rare can one say that someday they hope to be just like an 85 year old grandmother, but, in the case of The Notorious RBG, I’ll definitely make an exception! Ruth is the truth!

Rating:  Rated PG for some thematic elements and language