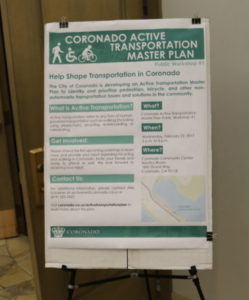 With its nearly flat, wide open roads, Coronado has long been heralded as a great place to bicycle or walk. While the topography is ideal, sharing the road has not always been easy.

On Wednesday night a public workshop (the first of three) at the Community Center brought residents into the process. Thirty people attended.

Allie Scrivener, the city’s active transportation planner, wanted to hear what issues the public was most concerned about and to solicit suggestions on how to make walking, biking or skateboarding, or any other non-motorized method of travel better and safer.

To encourage a more open discussion, individual stations directed at specific issues were set up around the room. The first gave an overview of the plan, the second asked people what visions for transportation were, the third focused on safe routes to school, and the last asked people to offer specific ideas for improvement.

The open format made it easy for people to participate without having to sit through a long presentation. You could come in, say what you wanted to say, and be out the door in five or ten minutes.

“The issues that came up were ones the city has been dealing with for some time,” Scrivener said. Too few bike racks, especially at the beach, traffic congestion on Ocean Boulevard, and problems crossing Orange Avenue were mentioned most often. Enforcement and bad behavior were also cited.

Carolyn Rodgerson was concerned about bicyclists “blowing through stop signs,” not only posing a risk for themselves, but also setting a bad example for kids. Others said law enforcement was not doing their job.

“I’ve never seen anyone given a ticket for riding a bike on Orange Avenue [sidewalk],” said Sandy Barkhurst.

Safety, especially for children, stood out as the main concern. “We just need to get kids where they need to be safely – school, soccer practice, the beach. If we make it safe for them, we’ll make it safe for everyone,” said former City Councilman Mike Woiwode.

Not everyone agreed on the best way to do that.

Robin MacCartee and Eddie Warner squared off over the benefits of bike lanes, something that is at the heart of safe routes to school. “Rather than keeping kids on bikes safe, the lanes actually put them in danger by putting them in the door zone,” Warner said.

The ‘door zone’ is the two to four feet into which an open vehicle door extends. MacCartee acknowledged the door zone risk. Still he pointed out that the lanes kept kids from riding four abreast which puts them in even greater danger.

Warner suggests a “massive education effort that changes the culture, so that people respect others’ use of the byways.”

Comments from the workshop, coupled with ones the city will collect on an online survey, will be used to identify issues and set priorities, Scrivener said. These will be discussed at the workshop planned for May.

Scrivener hopes to have the online survey on the city’s webpage by the end of next week.

People will have access to the survey, along with a timeline and goals for the master plan at http://www.coronado.ca.us/activetransportationplan.