Have you ever seen the movie A League of Their Own, the film where Tom Hanks, starring as baseball Coach Jimmy Dugan, delivered the iconic line, “There’s no crying in baseball,” as he coached the first season of women’s professional baseball during World War II? Did you know that one of that league’s most celebrated players lives right here in the Crown City?

Coronado Cays resident Lillian Faralla, known as Lil, was born in Brooklyn, New York in 1924, and spent six seasons playing for four different teams in the All-American Girls Professional Baseball League (AAGPBL). Between 1946-1951, Lil pitched for the Peoria Redwings, the Fort Wayne Daisies, the South Bend Blue Sox, and the Kalamazoo Lassies. In addition to pitching, Lil was an asset to any team she played for because she also played second base and right field.

Not only was “Diamond Lil” a member of the 1951 South Bend Blue Sox championship team, but she also had the impressive distinction of pitching not one, but two no-hitters for the Blue Sox in 1949. A right handed thrower, Lil was a starting pitcher as well as a relief pitcher.

How did Lil, who was raised in San Pedro, California by her Italian immigrant parents, wind up playing in the All-American Girls Professional Baseball League as a 22 year old? I recently had the honor of sitting down with Lil, who’s now 92 years young, to talk with her about her glory days playing America’s national pastime. A modest woman at heart, Lil was all smiles as she shared her recollections from about seventy years ago. Her beautiful blue eyes lit up as she proudly showed her collection of memorabilia to me.

What brought your family from Brooklyn, NY to San Pedro, CA?

“My father had a job here, and when he was able, he had us move from Brooklyn to here. It wasn’t a big adjustment because in those days California was the place to go! It was back in 1935 or something like that. We were looking forward to it! California . . .. holy cow!”

“I was about eleven years old when we moved to California, and then I started playing softball here. I thought it was great that they had leagues where girls could play.”

How did you get involved with the AAGPBL?

“It’s been so many years! I honestly can’t remember. I guess I was playing on a team, and got picked up by the All-American League. In those days I was not a pitcher; I was an infielder, a shortstop. I was playing in the outfield when they moved me in to pitch because apparently I had a good arm. They had to teach me how to pitch because, up until that point, forget it, I was a shortstop. Pitching’s not easy, but you learn.”

What did your friends and family think about you playing professional baseball?

“They enjoyed it. They were happy for me, and they were supportive.”

What were some of the best parts about playing in the All-American Girls Professional Baseball League?

“Just playing in the league because they were the tops! You knew that when you played there, you were in the tops too. Knowing that I was playing with the best was always good because it kept me wanting to do my best.”

“I made friends with my teammates, but didn’t have time to meet other people really because I was so busy with practicing, playing, and going home to get some sleep.”

What was one of the most memorable moments of your time playing professional baseball?”

“There was nothing outstanding (says the remarkably humble woman who pitched two no-hitters), but I can tell you something funny that happened. I slid into second base, and my shorts ripped. I didn’t know it. I was playing right field at the time, and when I was out there, all of a sudden, I felt the breeze underneath my skirt! I had to run into the dugout to borrow someone else’s to wear because mine split. I think that was kind of funny!”

How accurate is the movie A League of Their Own compared with your own experiences playing in the AAGPBL?

“It was fairly accurate. We made sure they didn’t make a Hollywood thing out of it. We had a lot of ball players involved with it, and they wanted it to be accurate.”

“The movie shows the ball players having etiquette lessons, and, yes, that was true. They brought a lady in to teach us how to sit, and she taught us etiquette and how to be ladies. I guess they had to have it. Who knows? They wanted to make sure that it wasn’t rough and tumble, that we were ladies, and we were.”

“We did sing the song (“Victory Song“) they show in the movie. That song was made up by the ball players because we were all around together, and somebody said, ‘Let’s make up a song.’ We all put in our two cents’ worth, and came up with the song, and it stayed.” (Lil still remembers the song, but didn’t want to sing it for me because she said she’s not a good singer.)

“I didn’t experience anything like that! It seems to me that the fans came to watch us play, not criticize us. There was none of that foolishness! That was movie stuff, and it wasn’t like that.”

Did they really say, “Dirt in the skirt,” like they did in A League of Their Own?  How did you feel about having to wear a skirt to play ball?

“Yes, we’d say, “Dirt in the skirt,’ and I can remember them saying it as I was sliding into second base. You’ve got to remember that we wore shorts underneath the skirts so it didn’t really matter that we had to wear skirts. You just went with the flow. We actually had tunics. Now me being a side arm pitcher, I had to pin my skirt so it ran tight along my side so my hand wouldn’t hit the material, ending up with me throwing the ball no telling where. I had to pin my skirt so I could throw the ball the way I wanted to.”

Tell me about pitching two no-hitters.

“I felt good because that’s an achievement to pitch a no-hitter. Actually, believe it or not, I almost pitched a perfect game! My first baseman dropped the third out for a perfect game so that was a big disappointment. Otherwise I would have had a perfect game. I still remember it . . . We were up in Wisconsin. She dropped the ball! I couldn’t believe it.”

Tell me about playing for the South Bend Blue Sox when your team won the 1951 championship.

“I considered them my team because I played for them for more than just one year. I enjoyed living there, and I enjoyed the team itself. I felt at home in South Bend. I was happy that I got to win the championship there. They [Blue Sox] loaned me out to another team that needed help for a short time, but they brought me right back so I was glad because my team was the Blue Sox.”

Why did you decide to stop playing after winning the 1951 championship with the South Bend Blue Sox?

“It was time for me to go out and work. I quit when I was on top! The only place you can go from there is down so I decided I may as well quit while I was on top.”

What did you do after you ended your baseball career with the AAGPBL?

“I did many things. I was a cop for twenty-some odd years with the Los Angeles Sheriff’s Department. That’s a long time to be a police officer.”

Did you attend the event in Cooperstown, New York in 1988 when female players (Diamond Dreams:  Women in Baseball) were inducted into the National Baseball Hall of Fame?  If so, what did that mean to you?

“Yes, I made it to New York, and was part of it. I felt that it was such an honor that they recognized us. It meant a lot to me to be there and be a part of it.” 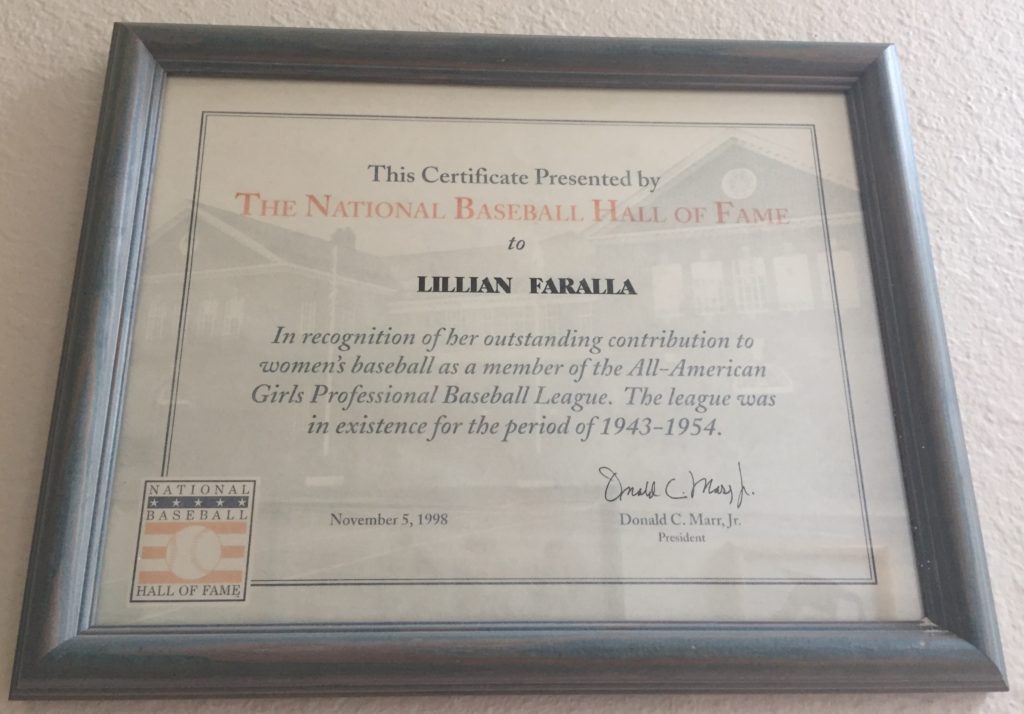 Did you ever attend any of the AAGPBL reunions?

“I used to go them, but not anymore because it’s now too hard for me to travel unless it’s nearby. I did go to one reunion that was held in San Diego.”

“I’m 92 years old. I’ve lived a long time. I still talk to my friends from the league on the phone, but there aren’t too many of us left. Most of us have died, and aren’t around anymore.”

What do you miss most about that period of your life when you played professional baseball?

Do you still follow baseball today?  If so, what’s your favorite team?

Any words of wisdom for young girls who are interested in becoming professional athletes?

“I’m not a person who gives advice really. All my life I was just as good as the boys, and wasn’t afraid to prove it. I’m glad I had a chance to do what I did. I feel very lucky.”

Your generation was the first generation of professional female athletes in our country. How does it feel realizing you played a role in paving the way for future generations of women to play sports?

“I honestly never looked at it that way. I was doing something I enjoyed doing, and there’s never anything wrong with that!”