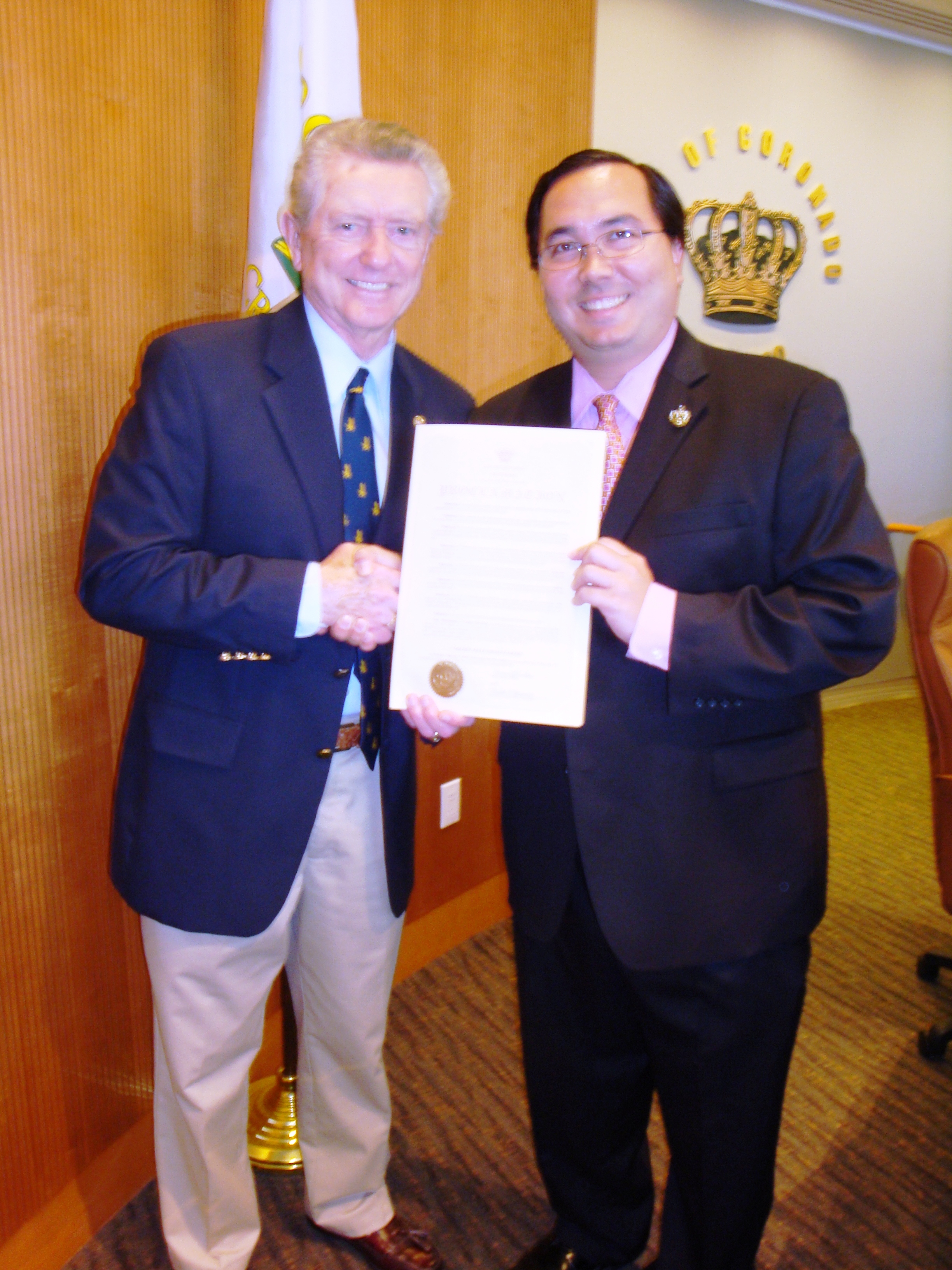 US Representatives Susan Davis and Bob Filner plus State Assemblymember Mary Salas also presented Kaine with Certificates of Recognition for his charity work.


Kaine and the Golden Rule Society are offering a special “thank you” to all Coronado residents. It’s a free lifetime prescription discount card. “We can’t exclude anyone so we include all Americans, especially those who protect and serve and their families. There are no strings attached and the free cards are available by visiting www.goldenrulesociety.org” added Kaine.

Whereas, Coronado‘s own Golden Rule Society, a charitable, non-profit Corporation, has been helping Children, Churches, and Charities since 1972; and

Whereas, the volunteers in the Golden Rule Society have successfully and beneficially touched the lives of over one million people worldwide; and

Whereas, its Founder and President Captain Leonard P. Kaine, US Navy (retired), who was named 2010 Veteran of the Year by the US Department of Veterans Affairs and has established a worldwide project to help children better themselves with an educational, motivational, character building, and inspirational program to stay away from drugs, alcohol, violence, and other self destructive behavior; and

Whereas, its Founders and Advisors are many community leaders including former Coronado Mayors, retired Chief of Naval Operations, other Admirals, a former Under-Secretary of the Navy, retired University Presidents, Attorneys, CPAs, an Airline President, Physicians, Airline Pilots, a Newspaper Publisher, a Banker, a Minister, Corporate Executives and prominent Business Leaders; and

Whereas, the Golden Rule Society is using the positive power of the Internet to touch and benefit the lives of many citizens in every State, more than 15 other Countries, plus the Islands of Guam and Puerto Rico with the focus on children in the lives of our Armed Forces, Police and Firefighters; and

Whereas, the Golden Rule Society is providing a number of free programs that benefit children, churches, charities and all legitimate non-profit organizations, our Troops, past and present, and all who protect and serve; and

Whereas, the goal of helping every child in every country with their free program, that guarantees each child that follows the program will be more successful in life, along with the Golden Rule Society’s philosophy of bettering the lives of others, and the challenge of living the Golden Rule are all worthy and noble ideals; and

Whereas, we want to sincerely thank the Golden Rule Society for their good works.

Now Therefore, I, Casey Tanaka, the Fiftieth Mayor of the City of Coronado, together with the full City Council of the City of Coronado, encourage all citizens to join us in recognizing the Golden Rule Society for its leadership and dedication in helping Children, Churches and Charities and non-profit organizations, which benefits families of our great country and other countries. It is with great pleasure that I do hereby proclaim
July 4, 2011 through July 10, 2011, AD, as:

In Witness Thereof, I Have Hereunto Set My Hand and caused the Seal of the City of Coronado, California, to be affixed thereto this 24th day of June, 2011.

Teens Invited to Participate in Staged Reading of “A Christmas Carol”

Golden Rule Society named as the national charity of choice supporting our Troops and Veterans.