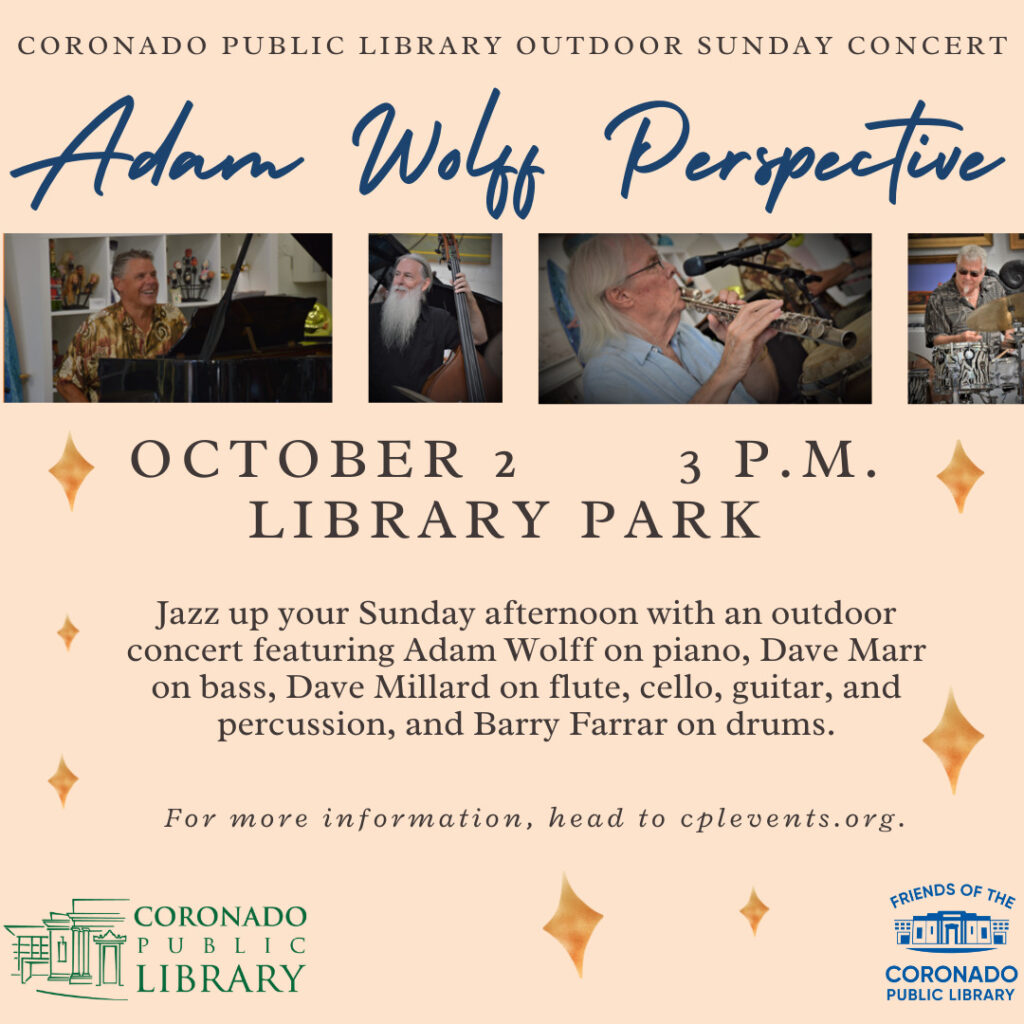 Join the library for an afternoon of music by the Adam Wolff Perspective. Spend your Sunday afternoon listening to standards, exciting Latin grooves, original compositions, and a couple of musical surprises.

This concert will take place in Library Park, so bring a chair or blanket or you can use ours!

In case of inclement weather this concert will be moved into the Winn Room.

Adam Wolff grew up in New York State, travelling back and forth frequently from New York City to the upstate area. He lived in Manhattan during the 1980s, and received a music degree from L.I.U. while performing and teaching in the New York area. His musical interests encompass jazz, classical, pop/rock and world music. He currently performs around the San Diego area with a variety of groups. He enjoys putting his own take on tunes that are not traditionally thought of as “jazz.”

Dave Millard is a unique instrumentalist, with the ability to play fluently on almost any instrument he picks up. He currently counts flute, guitar, cello, saxophone and percussion as his “main” instruments (!). Adam and Dave first met in 1978, when Dave was playing the shakuhachi (a Japanese bamboo flute) in an impromptu concert on the beach. They have been playing together since then, in many different group configurations.

Dave Marr is a stellar musician and bassist; he studied at the Berklee School of Music and played gigs for many years in New York, Chicago, Europe, South America, and the San Diego area. Charles McPherson, the local saxophone legend, included Dave in many performances. His particular love in music is that special era of jazz from the mid-’50s to the late ’60s, when so many of our country’s jazz masters were at their peak.

Barry Farrar comes from a musical family in San Diego- his father, Barry Farrar Senior, had a big band for many years in the area that included many outstanding players. Barry followed his father into jazz, and has played with many of San Diego’s finest musicians, as well as fronting his own groups. The earthy swinging grooves of Art Blakey are just one of his important inspirations.

Collectively, this quartet boasts well over 150 years of jazz performances. It would be hard to calculate how many gigs this represents! (Free CD to the person providing the best estimate.)