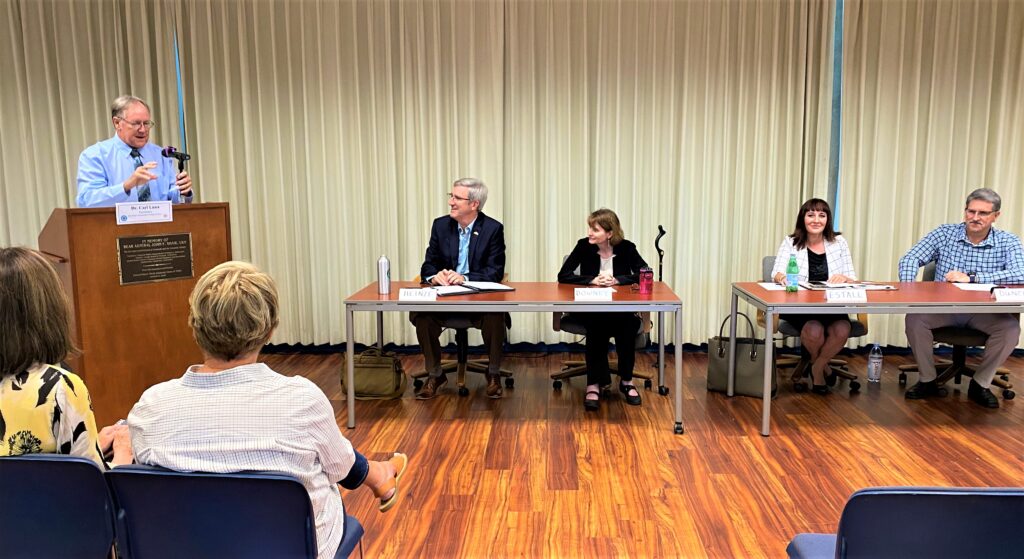 The four Coronado City Council Candidates got the opportunity to answer questions at the Coronado Democrat Club’s public forum for the community on September 19 in the Library Winn Room. There were about 30 guests in the audience to hear the four candidates that are vying for two seats on council, as well as approximately 70 others that viewed the forum streaming live on YouTube. Candidates Marvin Heinze, Carrie Downey, Pilialoha Estall, and John Duncan were all asked 10 questions by moderator Dr. Carl Luna, Professor Emeritus of Political Science at Mesa College, and Director for the Institute for Civil Civic Engagement at USD.

The format allowed the candidates two minutes to answer each question, with a 30 second follow-up response. The candidates only received the first question in advance which was in regard to their professional and community experience. Most of the questions were curated by Luna, but the audience was allowed to submit written questions during the forum, and several of those were used.

Candidates were also asked about the three top issues in the city over the next four years as well as their priorities. The candidates mentioned the Tijuana sewage crisis, the excessive Regional Housing Needs Assessment (RHNA) number, the Water Reclamation Project at the Golf Course, e-bike safety, infrastructure, local control, preserving Coronado charm by relooking at the Orange Avenue Corridor Specific Plan, and making information available in a timely manner so residents can weigh in on issues.

Other questions included ways to help preserve small businesses that are struggling to compete; dealing with traffic issues; maintaining and improving important city facilities; defining local control; opinions on response to new RHNA numbers, where it was noted that the current zoning only allows for about 350 units, along with the challenges of the Navy airport, Coastal Commission, space, etc. When the Winn room renovation was discussed, it was favored, at a lower cost, by all the candidates.

The candidates were also asked to name one thing the city does well and one thing it does not. Each of the candidates praised the professional dedicated city staff, and ideas for improvement included finalizing the last two union contracts, teaching new staff the history of Coronado, and promoting a more proactive policing presence.

There were moments of levity as the candidates moved the single microphone around. In the final closing statement, each of the candidates cited their strengths and motivation to serve. Luna thanked the candidates for their willingness to go into the political arena and represent the community. The candidates are slated to do six forums/debates prior to the election.

The Coronado Democratic Club was founded in 1888 and has a tradition of hosting candidate forums. You can watch the entire program here: https://youtu.be/s-JL_-unQ6U.