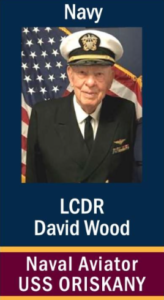 Born in Tucson, Arizona, in 1930, Lt. Cmdr. David Wood, U.S. Navy, grew up on a farm in the Willamette Valley of Oregon. Graduating from Oregon State University, he was commissioned an Ensign in the Navy and married Leone Van Hine on the same day — June 7, 1954.

David earned his wings of gold the next year in Corpus Christi, Texas, and reported as a naval aviator to his first duty station, VC 11, Early Warning Squadron 11 at Naval Air Station North Island, Coronado. Flying the AD-5 Douglas attack aircraft, he deployed aboard USS Shangri-La before transferring to Miramar Naval Air Station and flying with VA 115.

Other assignments included being a flight instructor in Pensacola and Jacksonville, Florida; deployment aboard USS Yorktown, an anti-submarine aircraft carrier; and deployment aboard USS Oriskany. During the Vietnam War, Wood flew the Sky Raider early warning aircraft, nicknamed “The Guppy,” with his navigator, Wayne McCardle.

Wood was stationed at Naval Air Station Lemoore from 1967 to 1969 and served as an instructor in the Navy’s newest attack jet aircraft at the time, the A4 Skyhawk. Wood and his wife moved to Coronado in 1969, raised three daughters, and still reside here today. His final naval assignments included Air Control Squadron 13, where he was responsible for aerial bombing and gunfire spotting and FASOTRA Group where he provided flight simulation training to the fleet. By his retirement in 1974, Cmdr. Wood had completed 20 years of service and five WESTPAC deployments.

Returning to his agricultural roots, Wood went to work in the San Joaquin Valley as a supervisor in the almond and walnut industry. He subsequently managed the Crown Motel coffee shop, owned Coronado’s Excel Travel Agency; and was a 20-year member of Kiwanis, serving as president in 1982 and 1983.

Wood has sung in the St. Paul’s United Methodist Church choir for more than 38 years. Most mornings, you will find him walking on the beach and later visiting with friends at the VFW or Senior Center. He enjoys trips in his motor home and snow skiing with the 70’s Club.