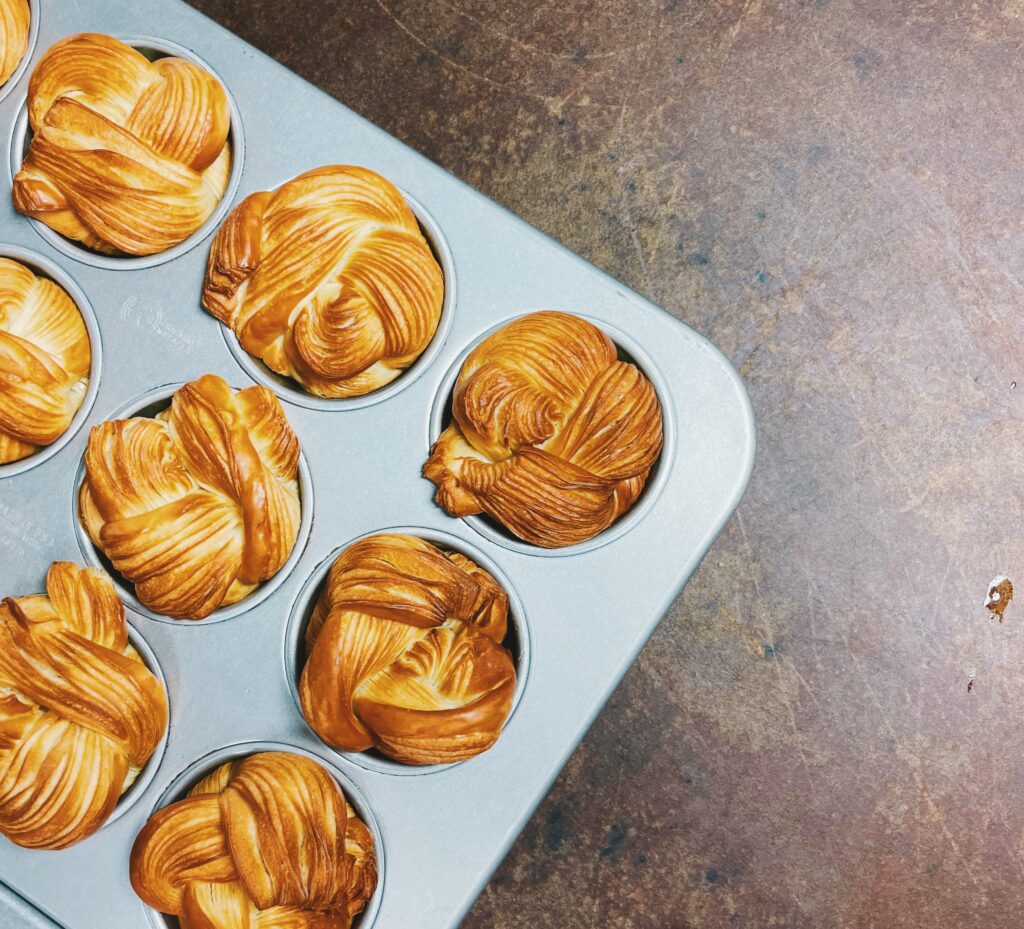 Jeffery Brown, co-owner of Izola Bakery in East Village, is cooking up a plan.

“I want to do for croissants and bread what Starbucks did for coffee,” he says from the artisan bakery and eatery on the corner of 13th and G Street, perched three stories up from the bustling sidewalks. “Remember coffee before Starbucks? It was boiled in an aluminum pot for hours and served in a Styrofoam cup. We want to make that same kind of educational shift for Americans.”

The 3,200 square foot space is bright and white with huge windows, bright red bistro tables and a line of hungry patrons that’s growing longer by the minute. The smell of baked goods wafts through the space, around couples and families and dogs and business partners all carving their way to a baked treat, hot out of the oven.

Izola is thriving: according to Brown, their business has grown 300% since they opened and the company is “hiring constantly.” But it hasn’t been easy; in fact Brown, a photographer by trade, opened Izola in the middle of COVID in June of 2020. He says that he, and his business partner Jennifer Chen, were inspired by a trip they took to France and then eating their way through Paris.

“We took the trip in February 2020, then we came back and it was COVID. We were just like, ‘We don’t like this! This is sad. This is lonely.’ We wanted to do something for the community that could have a positive impact. So we opened a bakery,” says Brown.

It took a while to get the whole “bakery” part of the bakery up and running, especially since Brown and Chen had no baking experience whatsoever. But Brown’s studio space made for the perfect location. (Previously, Brown worked as a commercial photographer with companies like Adidas and Nike and was also a finalist for the Pulitzer Prize as a feature documentary series about undocumented immigrants.)

For Brown, baking was a matter of trial and error. At first, he simply started baking from the recipe on the back of the bag. The results, at first, were less than amazing and he ended up throwing a lot of stuff in the trash. But after more than 700 experiments, he says they got what they wanted.

“We basically failed our way into what you’re eating now,” he says, smiling as he hands me a Mercer 8-inch bread knife to cut with; they don’t mess around with the cutlery here. He says he personally tested more than 50 knives before they settled on this one. “And don’t worry about the crumbs, the more crumbs, the better.”

The croissant is as good as he says. Warm and crusty and doughy and delicate all at the same time. Indulgent but elegant in its simplicity.

“The butter croissant is the spiritual home of any bakery,” says Brown. “There’s nowhere to hide. There’s no frosting, no sugar, and if you blow it, you come out and apologize because there’s no such thing as ‘good enough.'”

So now that the croissants were perfected, it was time to open. Izola started taking orders during lockdown in June of 2020 so there was nowhere to go but up. Up to the third floor that is, where Brown and Chen lowered a basket of hot bread down from their window to street level to keep customers safe from infection.

“It was a picnic basket,” laughs Brown. “We spray painted it black, and put it on a rope and lowered it to the ground. We could make 12 croissants a day. People would come by or DM us, and we would lower down the basket.”

Brown says IZOLA has been blessed with a passionate and supportive community since day one. And now that COVID protocols have relaxed, he loves having customers come and dine inside the bakery.

“I really wanted to make a place where people can come and hang out, and show up with their whole selves and be seen and valued and heard,” says Brown. “We have a very diverse clientele. You’ll see Black families, Chinese families, white families, kids, and dogs; we love dog slobber. We have some customers who are too old to go up the stairs to check out the bakery, they just can’t get up to the kitchen to take a look. So I make videos of the kitchen and AirDrop it to them.”

Ah yes, the bakery. Brown escorts me upstairs so I can take a look. He explains that the making of croissants is a four-day process. He says first, they mix the yeast and the flour so that it sits and ferments for a day. Next, the dough is made and it rests for a day. On day three, the butter is incorporated and on day four, you eat.

“There is no rushing,” he says. “We never stop baking. We bake all day long. Most bakeries bake at 2am and then it just sits there on the counter until you come in. But the croissants that we serve have all been baked in the last hour.”

He takes me into a room that’s chilled to 60 degrees to keep the butter from melting and the yeast from rising, “Paris temperature,” where two women work at lightning speed, pulling apart squares of dough and stretching and folding it to create the Tahitian Knots, an Izola specialty.

“This is where the magic happens,” says Brown. “The making of the dough is the hardest thing and it’s very physical. Depending on the day, we make 600-800 pastries. Nothing is pre-made.”

So how do the bakers at Izola know how many croissants and treats to make each day, to ensure that they come to your plate hot and fresh?

Turns out, there’s a secret ingredient to Izola’s success. It’s called the Izola Operating System, and it’s the technology that allows the company to execute a very simple idea: creating something with great ingredients, served fresh from the oven.

“Jenny invented it,” says Brown. “She built the system to use historical sales data to calculate what should be ready, when.”

He says first they calculate how many croissants they would usually sell, say a Thursday before Easter. That’s what gets produced and lined up. And then, as pre-orders come in at various times, the system looks at other data, and production can be changed to meet for current demand. The ovens are all controlled by iPads so the bakers know just what to put in.

Not only do customers know they will get a fresh-from-the oven baked good, but Izola operates with minimum waste–around 3%. Industry standard, according to Brown, is 11-12%.

Sounds pretty smart. How many other bakeries do this?

“None,” says Brown. “This is the technological advantage that gets delicious croissants to the customer in a way that is authentic. Yes, we’re good bakers, and yes we use good ingredients, but getting something that’s hot out of the oven…that’s really the magic.”

Brown says it’s a challenge to consistently operate at such a high level, and always serving food hot from the oven. But the system allows Izola to do just that.

“There are always like 800 croissants in the air at all times, and we are trying to find out where they are going to land, so they go to your plates at the right time,” says Brown. “Timing is everything.”

Brown says that he feels lucky to get to help lead a team of talented workers, and hopes that every day he encourages them to do something special. He says Izola is very mission-driven and justice-focused, and is built on a collective team spirit.

“I really want to encourage people to show up with their whole hearts and do something amazing every day,” said Brown. “We believe in economic justice; we believe in gender justice. We are women-led, we are LGBTQ led. Everyone here gets paid the same from the dishwasher to the person making the sourdough or the croissants.”

And does this model work?

“I am proud to say that we are actually exceeding minimum wage specifications, and we are going to be awarded a living wage certification in San Diego. That’s amazing,” says Brown.

Brown credits strict COVID protocols for keeping his employees safe and yet sympathizes with other eateries nearby that have been forced to shutter. He says employees at Izola have been wearing masks religiously since COVID started, and just stopped wearing them last month. Izola also requires employees be vaccinated and boosted.

“No judgement if you don’t want to do it, your choice,” says Brown. “But you can’t work here.”

So what’s next for Izola? Brown says they have a building under contract to function as a production center and a restaurant in City Heights. He envisions an eating space where the ovens are front-and-center, surrounded by a bar, so you can watch the team cutting and rolling the croissants.

Izola’s technology also makes the business scalable. Why not replicate the idea and bring other bakeries into different San Diego communities?

In fact, Izola just launched a capital campaign to help power the development of new distributions channels like other bakeries as well as live-bake trucks (envision a food truck turned inside out.) In the last three weeks, more than $350,000 has been pledged to support Izola’s dual mission of joy and justice.

“Some Americans have never experienced a croissant like this,” says Brown. “It doesn’t have to be fancy. But it has to be delicious.” 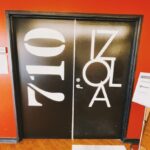 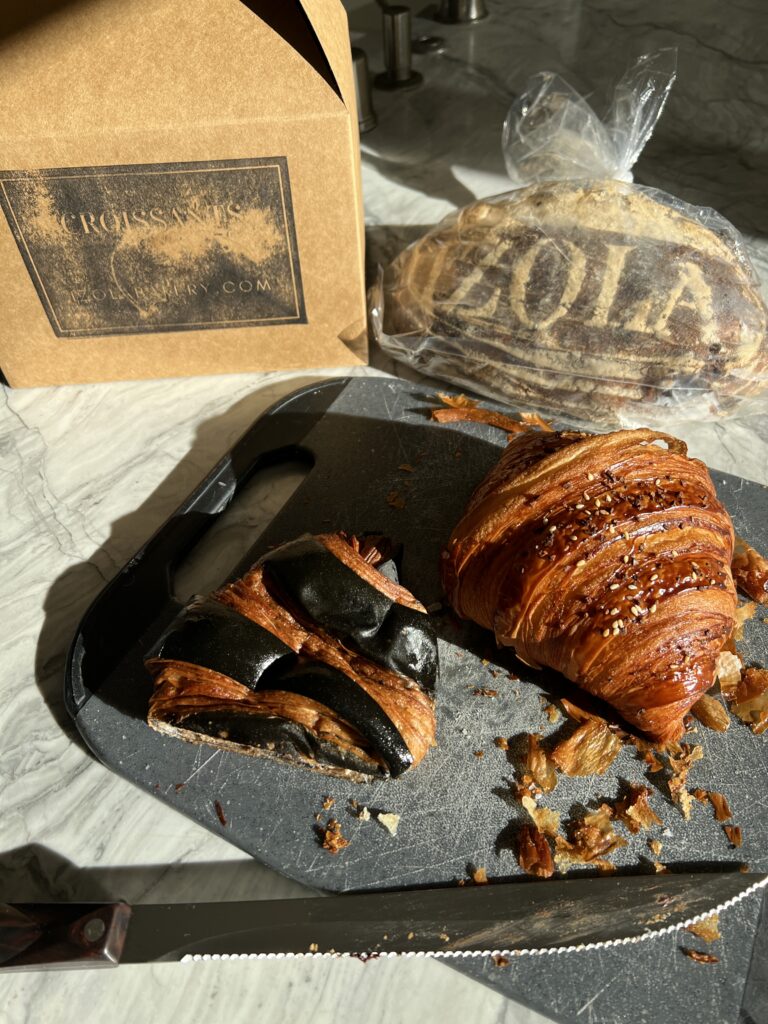