To talk with Ivan Dunn is to speak with a man of conviction and commitment. A retired Navy Captain and cryptological officer, Ivan has both travelled the world and established deep roots in Coronado… a far cry from his hometown of Bell City, Missouri.

Since retiring from the Navy, Ivan has immersed himself in civic activities. Foremost amongst these is his interest in and contributions to ecological and environmental initiatives. And this is where Ivan‘s and Emerald Keepers’ paths so fortuitously crossed. For years he had picked up trash along Coronado’s roads, beaches, and bikeway; as he states, “I simply couldn’t pass it by.” When he learned of Emerald Keepers, he immediately took their pledge and began expanding his trash mitigation efforts. His typical stop-bicycle-and-pick-up-small-items routine soon paled in comparison to the “mobile trash can” he designed out of a bike trailer and employed on what he describes as his “big pickup days.”

In characteristic fashion, Ivan was only warming up! Combining his love of photography, drones, and nature, he began creating videos documenting areas of interest in and around Coronado and used these to advocate for cleaning our environment and protecting wildlife. Two small examples are his videos of King Tides flooding over the Strand bikeway and documenting the history of the solar salt ponds in South Bay. 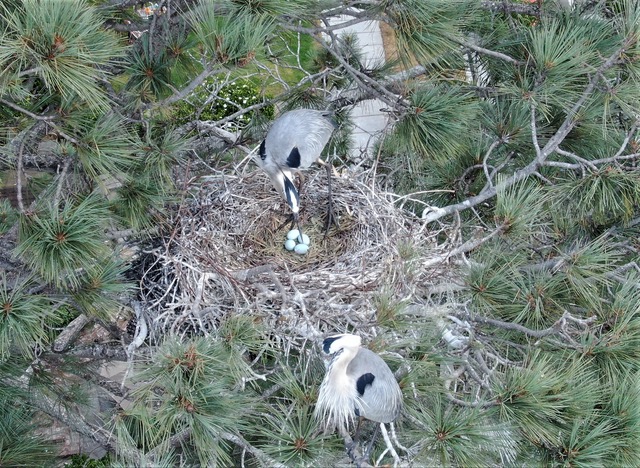 Arguably his best video to date is of blue herons nesting in the large tree on Glorietta Blvd — capturing the majestic birds in flight, eggs in their nests, and feeding their young. As he continues to keep an eye on these avian beauties, Ivan also notes, “I have seen Coronado’s bird populations — herons, egrets, snowy plovers, least terns — increasing over the years. We need to keep the waters clean for them!”

Growing up in a family of Rotarians, Ivan — a past President of the Rotary Club of Coronado — was very excited when Rotary International introduced its newest global Area of Focus: Supporting the Environment. He is quick to remind people that Coronadan (and fellow Rotarian) Marshall Saunders was a huge and early influence in both Rotary’s and the nation’s environmental awareness. Of his own accord Ivan organized a group of Rotarians who conduct monthly bicycle clean-up rides down the Strand. He is frequently heard to quote Kelley Helfand (a fellow Rotarian), “Once you see the trash, you can never unsee it!”

As more and more citizens of Coronado pledge to follow the simple practices advocated by Emerald Keepers, each becomes a catalyst and positive example protecting our environment and making Coronado a more sustainable community. An indisputable role model, Ivan Dunn is most deserving of recognition as January 2022 Emerald Keeper of the Month!