The Coronado Unified School District school board trustees met on Thursday, January 20th at District Offices where they voted 4-0 to appoint a new board member after the resignation of trustee Stacy Keszei. Trustee Helen Anderson-Cruz made the motion to appoint a new board member instead of holding a costly special election or waiting until November elections to fill the seat.

“I have a hard time believing that we can’t find someone in the community who is qualified for this position,” said Anderson-Cruz. “We have many educators and former educators and involved parents and community members who are up for the task.”

Esther Valdes-Clayton, who ran the first meeting of the year in her new role as board president, said she wanted to ensure that the appointment process was fair.

“We want this process to be as transparent and unbiased and democratic as possible, and motivated by the needs of the school district,” said Valdes-Clayton. “I want the process to be smooth, and I don’t want us to get bogged down with anything other than academic achievement.”

According to board policy, the board may determine its own procedures for advertising the vacancy, filing candidates and making a provisional statement. The appointment must be made in the 60-day timeline since Keszei’s resignation, or by March 12th. The provisional appointment will hold office until the regularly-scheduled board election on November 8, 2022.

At least eight members of the community made public comments in support of Deberie Gomez-Grobe who announced her candidacy for school board in the January 19 Coronado Eagle-Journal either as a provisional appointment or a candidate in the special election. Speakers commented on her impressive resume which includes more than 32 years experience in public educational administration.

One member of the community referred to her as someone who is an “Olympic listener” and “gets things done with grace and efficiency.” More than two dozen attendees stood up to express their support of Gomez-Grobe when asked to do so by Coronado resident Kevin Shaeffer.

Gomez-Grobe, who holds a Ph.D from the University of Texas at Austin, has spoken at several school board meetings in support of educational excellence and achievement. She has stood alongside We the Parents Coronado, a group of about 150 community members (according to their Facebook page), in their active stance against Critical Race Theory* (which the district denies teaching) and the No Place for Hate Club*.
* Both links go to Letters to the Editor written by Gomez-Grobe

Gomez-Grobe said that CUSD, like many other school districts in California, is on the edge of a “big cliff” in terms of financial stability and social-emotional well-being of the students as evidenced by pandemic-induced suicide rates and drug problems.

“I think we need to focus on the fact that this is happening in the long-range plan,” said Gomez-Grobe. “Everyone sees it, and we have to see it and respond to it before it does happen.”

A mother and military wife, Appollonia McKee, also spoke with interest in the board vacancy. She said that, given the valuable role military families play in the school community, a military-connected individual could be an important asset to the school board.

Jennifer Landry, the president of the Association of Coronado Teachers (ACT) spoke on behalf of the members, saying “this has been a month like no other.” With Omicron cases rearing up, she said the teachers are overwhelmed and thanked them and the substitutes for their presence and flexibility in the challenging times. She said teachers are getting more communication than they ever have, but also more angry emails.

“We know we’ve got parents out their doing their best for their kids,” said Landry. “But we hope that everyone can take a deep breath and realize, we know that they’re overwhelmed, but we are too. Before they hit send, hopefully they can think about their intent and what their recipient is going through. We too have sick loved ones. We too have suffered losses. We too have more than ever on our plates. Let’s all get through this together.”

Brooke Falar and Alison Keehan, Interim Principal and Assistant Principal of Coronado Middle School, respectively, were at the board meeting to present their report on CMS. Falar shared that the kids were back on campus, and they are working harder than ever and they are happy.

“Everyone was ‘zoomed out’ and we were so happy to be back in person, making connections,” said Falar.

She said the school held its first school dance since February of 2020, and that school enrollment is edging up to about 640 students. At the conclusion of their report, Superintendent Mueller made the announcement that both Falar and Keehan should officially take on responsibility of Principal and Assistant Principal, removing the “interim” from their job titles.

“They are both invested in their school and their students, the academic rigor is in place, they have incredibly high expectations for their students and their staff, and there is enthusiasm on that campus,” said Mueller, who presented each administrator with a bouquet of flowers to the resounding applause of the boardroom.

Other good news was shared by Mueller at the start of the meeting. He said that fortunately, absenteeism for staff and students is on a downward slope district-wide, as of the day of the meeting.

“We reached a peak after break of 17% of students absent, and this afternoon it was 8.5%,” said Mueller. “I feel we are trending in the right direction and I am hopeful that we will continue to navigate these difficult times together as a community, understanding that our ultimate goal is to keep our campuses open, our students on campus and everyone safe.”

Mueller acknowledged that although the trends are promising, the district is not completely “out of the woods” as the district does continue to experience daily staff shortages and he is grateful for members of the community signing up to be volunteers.

“It was nerve-wracking coming back to school after Christmas break with Omicron surging, and each day at school more and more school desks were empty,” said Dineen. “Yet, despite these continuing challenges we face at school and as a community, we’ve seen a tremendous improvement in attendance and also an improvement in attitude across the student body.” 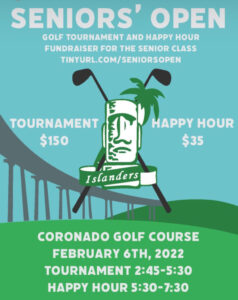 Dineen thanked the school faculty and staff for forging forward amidst changing times, and shared other school successes such as Silver Strand Elementary raising more than $18,000 at the Apex Fun Run. He shared that the CMS performing arts classes were heading to Disneyland for their field trip and that sixth grade camp was moving forward for the first time in two years. In addition, the seniors are working on their biggest fundraiser of the year, the Senior’s Open, a golf tournament and happy hour. Even those who don’t wish to golf can still donate on Venmo @coronado2022.

Coronado School Foundation’s Michelle Gilmore was at the meeting to give a presentation and acknowledgement of the fundraising efforts by young philanthropists Jack and Grace Elardo, a ninth grader and eighth grader with CUSD. According to Gilmore, in the last five years, the pair have raised more than $20,000 for CSF, hosting everything from lemonade stands to donut and coffee sales.

Other good news: the district confirmed a partnership with Mary Frese, the owner of Clayton’s Coffee Shop and Clayton’s Bakery and Bistro, who will offer a $40 gift certificate to every single CUSD employee as a token of their thanks. 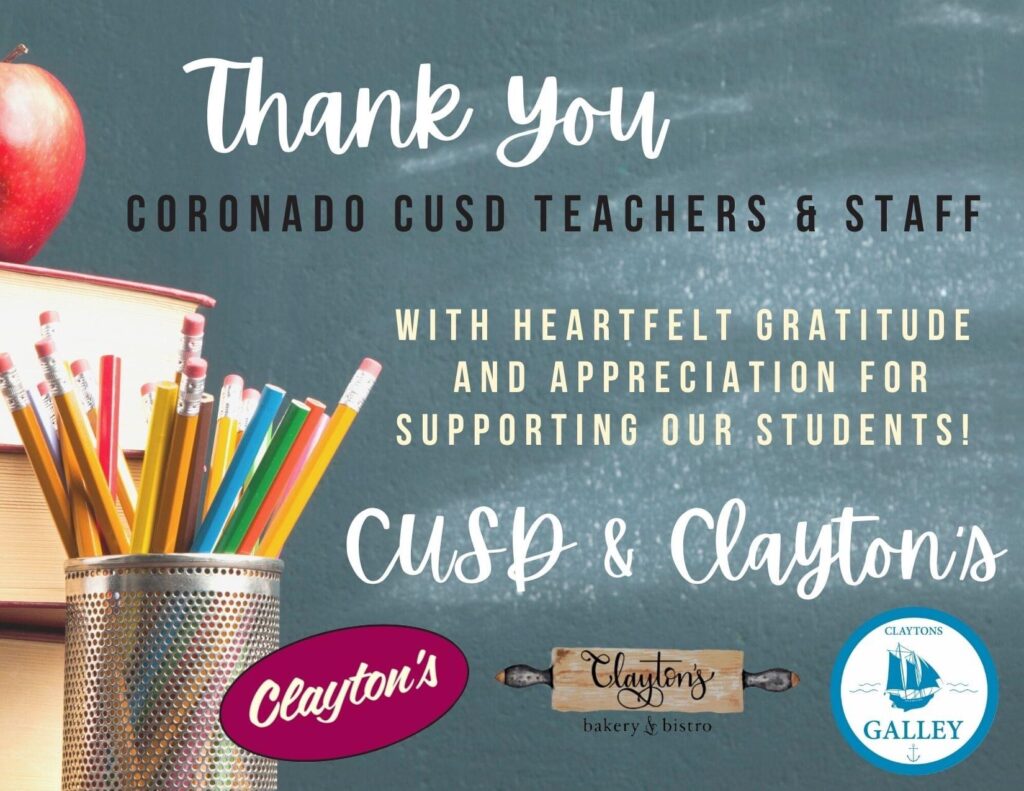 Mueller shared that community members are invited to attend a series of community forums and workshops, the first of which will take place on February 10th at 5pm, focusing on goals of academic achievement and the CUSD budget. The next regularly scheduled board meeting will take place on Thursday February 17th.