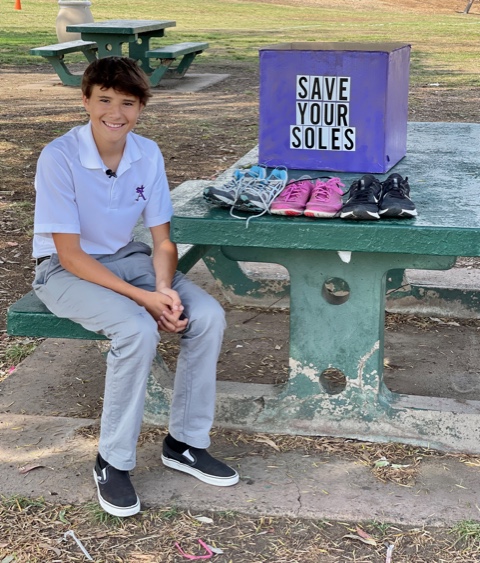 A Coronado teen is collecting used shoes (both running shoes and ordinary shoes) to be distributed to people in need. The running shoes will go to One World Running based out of Boulder, Colorado, where they will be sent to runners in developing countries. The regular shoes will go to Project Sole and be distributed to those in need in the United States.

Owen Arnaudy is a freshman at St. Augustine High School where both service and volunteering are important values. Owen wanted to do a service project that is meaningful to him personally. He is a cross country runner and goes through shoes very quickly — he grew 7 inches in the last year and a half and is constantly needing new running shoes. He thought that there must be other runners like him who have good quality shoes with a lot of life left in them.

His mother Kara posted his idea for the shoe collection drive on a Coronado social media page to help him get started. He thought that he might get about 10 pairs of shoes. He also thought that he might need to pick them up from people and provide an incentive, such as a prize, for donating shoes. But he was amazed that within a few hours people started dropping off shoes at his house. 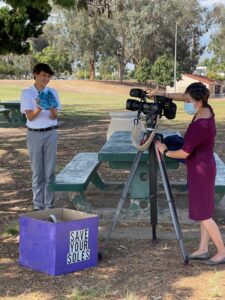 ABC News picked up Owen’s story and it was featured on the 6 pm news in their Positively San Diego section. Also, his school helped to get the word out through the St. Augustine social media and communication platforms. Additionally, his religion teacher offered extra credit to students who brought in shoes. Owen has been so encouraged by the incredible generosity of everyone.

Originally thinking he’d get 10-20 pairs of shoes, in less than one week he reached his (revised) goal of 100 shoes, and now thinks he should revise his goal upwards again! Owen is continuing to collect shoes for a bit longer, and plans to do another drive next fall as well. He is also hoping to do a service trip with One World Running so he can personally deliver some of the shoes. One World Running has recently informed Owen that their next distribution will be to Lame Deer Cheyenne and Arapaho runners, and then to Honduras this winter.

Currently there are two collection boxes: At 920 Balboa Ave and at St. Augustine High School. Owen is hoping to have more collection points for another drive next year. He is hopeful that people will keep it in mind throughout the year as children outgrow shoes and remember to “Save Your Soles” for next fall’s drive.

Owen and his family are currently trying to figure out the best way to mail the shoes to Boulder, Colorado (as he was not expecting to have so many). He was wondering if there might be a local business who would be willing to partner together to help him send the shoes.