“Team Tom” began with Christophe Dugan and CJ Machado. Ahead of Tom’s 98th birthday in 2019, Christophe took Tom to Normandy. There, on the 75th anniversary of the Allied invasion of Normandy, also known as D-Day, Tom jumped out of a plane above France just as he had done in 1944. 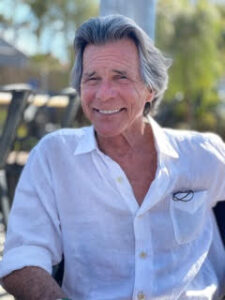 Coronado’s Brad Willis joined Team Tom to help orchestrate the 2021 Coronado event in celebration of Tom’s 100th birthday on August 15. Of the 75th anniversary jump in France, Brad shares, “when Tom was asked what it was like to jump 75 years later, he responded, ‘My hope is the next generations will always remember the men who came and fought for them, many sacrificing their lives to liberate the world. May we never forget them.’ Tom is dedicating his 100th birthday jump to the 101st Airborne Division and ‘The 4 Colonels of Carentan’ in support of a monument being built in Normandy as a tribute to those who liberated Europe.”

The plan was to go back to Normandy and jump for Tom’s 100th birthday, but COVID restrictions complicated the trip. Being able to relocate the big jump felt like a victory.

“We’ve had a difficult time like every community,” Brad admits. “This is a story that was so inspiring, to show what a hero Tom is.” Tom was born and raised in Coronado and he was even one of Coronado’s first lifeguards – more about that here.

The Video Seen Around the World

No stranger to videography, Brad has made over 250 videos on community, the arts,  authors, the school board, Coronado City Council, and more (many of Brad’s videos can be seen here). However, it’s Brad’s video on Tom Rice’s 100th birthday celebration that tops his charts.

“It’s been incredibly well received, when it hit 10,000 views – that’s half the Coronado population.” The video went on to garner even more of a response than that. At the time of publication, the video boasted 2.2 million views, over 77,000 likes and over 18,000 shares. Brad reflects that he feels heartened by the amount of people his video has touched. Helping with the video project was Brad’s son, Morgan Willis, who was in the plane with Tom and shot some of the video for the piece.

The cost of the August 15 event was $10,000. In the days leading up to it, Brad set up a Go Fund Me page and shared it through a local Facebook group, The 92118, which resulted in about $5,000 of generous donations from the Coronado community. Discover Coronado donated the remaining $5,000. Incredible support was also received from the Hotel del Coronado, the city, police, FAA and the Navy. The Del provided the facilities and hosted a lunch on the lawn.

Tom’s birthday jump brought the community together in a celebration of good news. Brad shared that The 92118 group focuses on things that bring our community together – he describes the group as, “celebrating our people, which is emblematic of that focus.”

Below is the video that’s been shared around the world:

Videography by Brad Willis, Morgan Willis and Juan Arango of Round Canopy Parachuting Team-USA for Operation Call to Service.