Major Facilities and Artistic and Community Programs Are Named for Ernest and Evelyn Rady, Joan and Irwin Jacobs,  The Conrad  Prebys  Foundation, and Una Davis

Public Phase Begins, Inviting the Community to Join in Securing the Future

THE RADY SHELL AT JACOBS PARK™

The San Diego Symphony Orchestra Association announced that “The Future Is Hear,” its $125 million comprehensive campaign has now surpassed the 75 percent milestone, having raised $98.7 million to date. 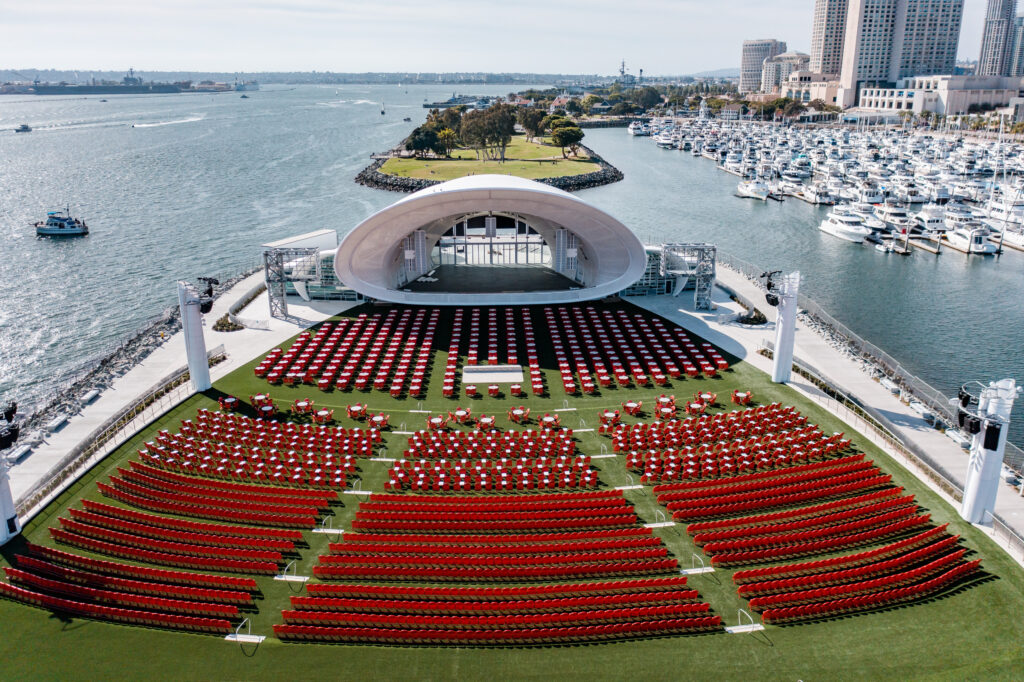 “The Future Is Hear” was developed to support the organization’s wide-ranging artistic and community programs, including construction of an extraordinary state-of-the art, year-round outdoor waterfront venue and public park along the Embarcadero. The campaign also encompasses improvement of the infrastructure of Copley Symphony Hall at the Joan and Irwin Jacobs Music Center, engagement of all of San Diego’s diverse communities with transformative musical experiences, and ensuring the future of the Symphony. Thanks to the pillars of San Diego’s philanthropic and cultural community and impressive additional patron support, fulfillment of the campaign is now in sight.

Acknowledging its consortium of lead donors for their extraordinary investments, the San Diego Symphony has named its permanent new outdoor venue The Rady Shell in honor of Ernest and Evelyn Rady. The venue’s bayside surroundings have been named Jacobs Park in honor of Joan and Irwin Jacobs. The central gathering space for al fresco dining and socializing has been named Prebys Plaza in honor of Conrad Prebys and The Conrad Prebys Foundation. The performance area has been named the Una Davis Family Stage in honor of Una Davis. 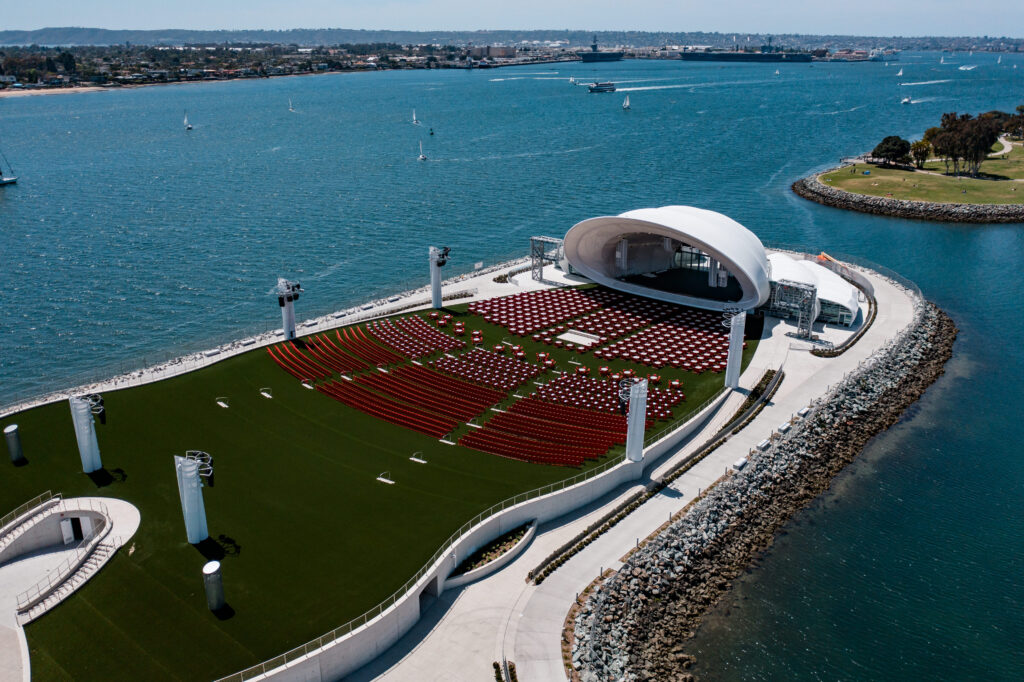 Ernest and Evelyn Rady have contributed the lead gift of $15 million to support the construction of the venue.  Joan and Irwin Jacobs have given $11 million in support of the outdoor venue in addition to other significant leadership gifts to support various aspects of the comprehensive campaign.  The Conrad Prebys Foundation has made a $15 million contribution with $12.5 million in support of the outdoor venue.  A $10 million gift made possible by Una Davis ensured the project’s success in the early stages of the campaign. 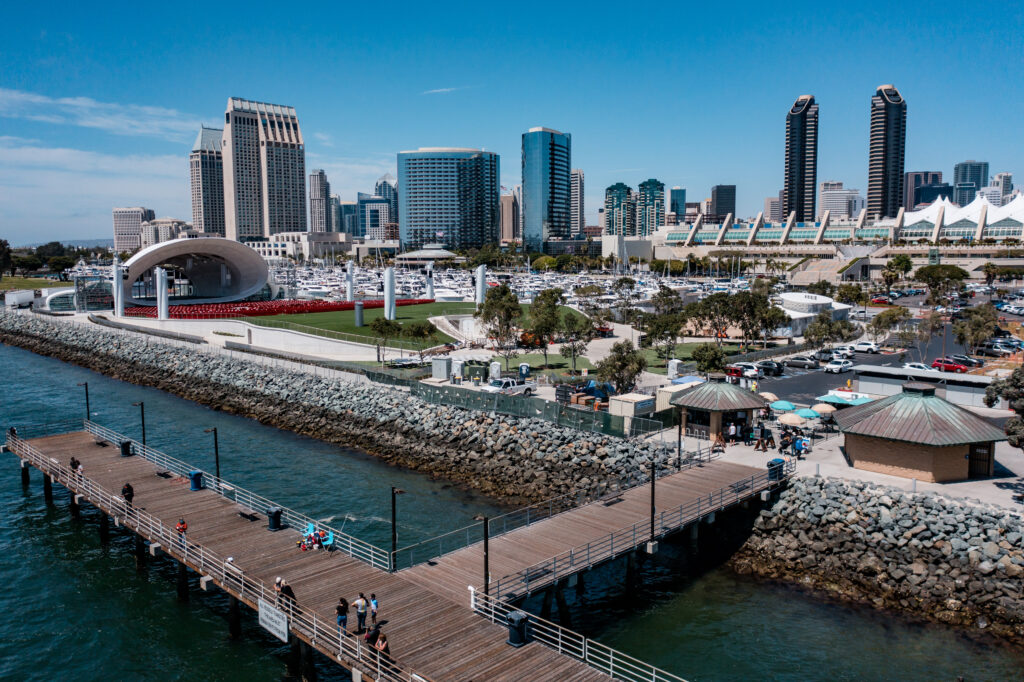 “When I first stood on the stage early in the construction of what would become The Rady Shell, I was surprised at how much I was moved,” said Ernest Rady. “Its potential and power are beyond what I could have imagined.  We are supporting this project because of the impact we believe it will have on our city and our region – welcoming both our residents and our visitors. This is a venue that will not only feature our amazing orchestra and preeminent artists, but also be a public park with programming for families, school children, and individuals on the beautiful landscape surrounded by San Diego Bay with our city’s skyline in full view. We cannot wait to be a part of the first performances and see the joy it will bring to so many.”

“It was more than 18 years ago that we first thought that the San Diego Symphony should have a permanent outdoor home,” said Irwin Jacobs. “The summer season has long been a memorable tradition to so many San Diegans. From Inspiration Point, Mission Bay, and Navy Pier, we were an orchestra looking for the perfect location. Finally, with the move to the Embarcadero Marina Park South we found our place. It took many more years to make it our home, but with The Shell’s opening that is exactly what it will become. The realization of The Rady Shell at Jacobs Park has exceeded our wildest imagination. Its beauty and proximity to the Bay and the City are unique. What we are truly excited about is the acoustic magnificence of the venue, showcasing our marvelous orchestra and its guests with truly excellent sound.” Joan Jacobs added, “We are thrilled to support the park that is The Rady Shell’s home, which will be open for everyone to enjoy, both during concerts and in the time in between.” 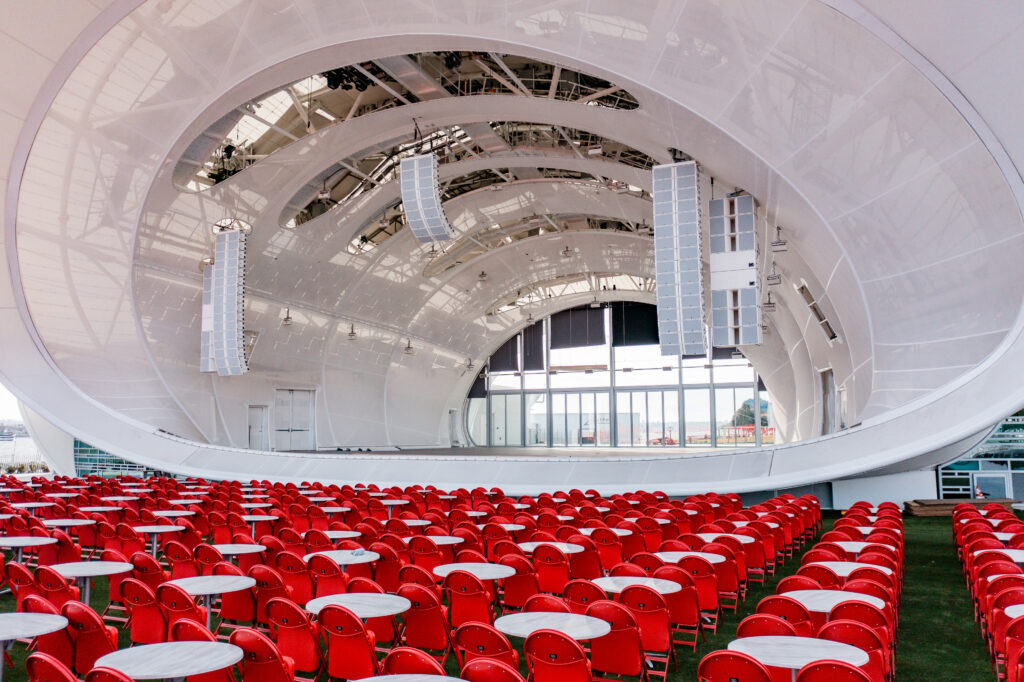 Una Davis said of The Rady Shell at Jacobs Park, ”I am delighted to see this venue come to life. From the stage where the music is made, to the lawn where people will enjoy their family picnics and games, to the magnificent views of our bay and our city, I know it will be a tremendous asset to our downtown. I am so proud to be part of making this dream possible.”

The Conrad Prebys Foundation previously announced its generous support of The Rady Shell at Jacobs Park and its vision. “The Rady Shell at Jacobs Park is a venue that Conrad would have been very proud to support, not only because of his love of music, but because of all that it symbolizes as a public space. It will be used for many purposes and will bring our entire community together,” said Tony Cortes, Board Chair of The Conrad Prebys Foundation. “The Foundation is honored to steward Conrad’s legacy with support for this momentous project.”

“The Future Is Hear” now enters its public phase, when the Symphony invites all members of the community to join the campaign and become a part of this transformational new community resource for San Diego.

Chief Executive Officer Martha Gilmer said, “I join with our Board of Directors and Foundation Board, our Music Director Rafael Payare, the members of the Orchestra, and the entire staff in expressing our profound gratitude to the campaign’s lead donors, and for the exceptional generosity of the individuals and foundations that have so graciously stepped forward with them to bring us to this point. The Symphony is an essential contributor to the San Diego community, welcoming everyone as we change lives through music. This campaign is lifting us toward that goal. We invite everyone to participate.”

The crowning achievement of “The Future Is Hear” campaign is the creation of The Rady Shell at Jacobs Park, which represents an $85 million philanthropic investment within the $125 million campaign. Scheduled to open to the public in summer 2021, The Rady Shell at Jacobs Park is the first permanent home for the Symphony’s open-air performances and events. As innovative in design as it is spectacular in setting, offering 360 degrees of year-round music, sky, and sea, The Rady Shell at Jacobs Park is an unprecedented resource for the Symphony’s expanded schedule of diverse outdoor concerts. Music Director Rafael Payare has programmed an exciting roster of commissioned works and premieres, and the schedule will also feature performances by international touring artists and free programs. The venue, managed by the Symphony, will be available year-round for use by non-profit community groups, schools, and individuals, and includes public walkways, dining pavilions, and beautiful vistas of the waterfront and downtown San Diego in the heart of the Embarcadero. It will be accessible to the public for free 85% of the year, making this a true community asset.

“None of this could be possible without the extraordinary support and cooperation from the Port of San Diego and the California Coastal Commission,” said David R. Snyder, Board Chair of The San Diego Symphony Orchestra Association.  “On behalf of our entire association, I express our sincerest gratitude for their assistance in making The Rady Shell at Jacobs Park a reality.”

Contributions from $10,000 and above will be listed on the Donor Appreciation Wall at the venue and large contributions will receive recognition at various locations at The Rady Shell at Jacobs Park. Gifts can be made over three to five years. Gifts of all sizes have a significant impact. For more information about the various levels of giving to the campaign and the associated benefits, visit the website at www.sandiegosymphony.org/campaign or email campaign@sandiegosymphony.org.

After an extended closure, Spreckels Center is excited to finally re-open its doors to Coronado’s 50+ community. The center is ramping up to offer...
Read more
Community News

This summer, Coronado Recreation and Golf Services is offering seven different specialty dance camps! For the youngest dancers (ages 4-7) there is "Twirl, Spin and...
Read more