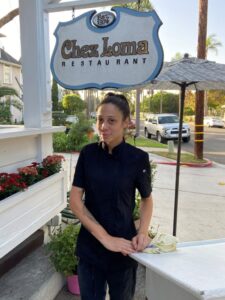 Starting a new job is never easy, but starting a new job during the pandemic, in an industry that has been hit particularly hard, is quite the challenge. But it’s one that Chez Loma’s new executive chef, Charleen Sandoval, was up for. Sandoval has been at the restaurant for about three months and is tasked with revamping the company after they were forced to minimize many of their services during the pandemic shutdown.

“We’re excited for the potential we have,” Sandoval said. “Right now we’re getting the groundwork set before we launch into major changes but everyone is kind of going through the same transition. It’s like opening a whole new restaurant.”

Sandoval has dealt with a variety of unique challenges that have arisen from the coronavirus pandemic. One challenge in particular is maintaining the hospitality standards of a fine-dining restaurant while social distancing.

“You would want to be more intimate and engaged with your guests, but granted the circumstances, you have hospitality from afar so to speak,” Sandoval said. “So it really does make it difficult to have that engagement while we’re trying to keep safety in mind as well.”

Despite the challenges, Chez Loma has implemented a number of new features in order to keep guests safe and still create a pleasant environment. They’ve installed hand sanitizing stations, put out QR codes for menus and expanded their back patio. Sandoval says that so far she’s pleased with how the adaptations are going.

“Every place right now has their hardships because of the circumstances,” Sandoval said. “And we’re in the same boat as everyone else. But as long as we are focused on growing and moving in the right direction, that’s the most I can ask for.”

Before Sandoval started at Chez Loma, she worked in a variety of restaurants in San Diego, including Cowboy Star, Trust, and Oceanaire. She says she was inspired to become a chef while working with female chefs at Urban Pizza and Pizzeria Mozza. Although she did not go to culinary school, Sandoval took her education into her own hands, doing her own research and perfecting her skills through hands-on practice.

“Throughout the years I found myself developing techniques and passion,” Sandoval said. “It makes me think culinarily, every single day. It’s what I do for fun, make new dishes and taste new things and experience new cuisines.”

Over the past 11 years, Sandoval has honed her skills with the goal of reaching a place where she can express herself creatively and have control over the menu.

“It’s through all of these experiences and working with all of these great chefs that I gained all of this knowledge to have the confidence to go into somewhere as revered as Chez Loma and be able to take us to the next level I believe,” Sandoval said.

After years of working in male-dominated kitchens, Sandoval is happy to be working with General Manager Heather Nunnelly. She says in 90 percent of the kitchens she worked in, she was the only female who wasn’t a pastry chef.

“I’m her number two and we’re trying to knock this restaurant out side by side,” Sandoval said. “To have another female by my side, it’s empowering. It does take a certain type of woman to be able to immerse herself in the kitchen environment because it’s very much a boys’ club.”

Now Sandoval says she is using her experience to make Chez Loma the best it can be.

“I am really looking forward to taking Chez Loma in a new direction and I want to be embraced by the community in Coronado,” Sandoval said. “At the end of the day, it’s their community and I’m just working in it so I want them to feel just as embraced by us as we feel by them.”

Elevate your date night. Starting May 2nd Stake Chophouse & Bar will be offering an exclusive three course menu with an optional wine or...
Read more
People

Located steps away from the historic Hotel del Coronado, Earth, Wind & Sea has been a Coronado staple for over 20 years. This last...
Read more
Community News

The 2021 Coronado Community Read centers around a nonfiction book about racism in the United States titled Stamped from the Beginning by Ibram X....
Read more
Advertisement
Sponsored Partner Links