Note: This article was updated the morning of July 6 with additional information on the condition of the bald eagle.

It is with heavy hearts we share that the ailing bald eagle admitted to San Diego Humane Society’s Project Wildlife on July Fourth has passed away.

This morning the juvenile bird was having more difficulty breathing, despite receiving supplemental oxygen in the critical care unit at our Pilar & Chuck Bahde Wildlife Center.
Our highly trained medical staff knew they had to find out why the bird was not able to breathe. They sedated and anesthetized the bald eagle for a thorough exam. Full body x-rays showed no obvious abnormalities. SeaWorld provided an endoscope to help visualize the inside of the eagle’s trachea and GI tract. There were some small parasites in the bird’s throat but not likely to be the major issue. There was also evidence of slow gut movement in the GI tract. Once the diagnostic procedures were finished, the gas anesthesia was turned off but the bird never woke up from the anesthesia. Several efforts were made to resuscitate the bald eagle, but we were unsuccessful.

Our staff and partners have done everything in their power to help this bald eagle, and are extremely saddened by today’s outcome.

On the 4th of July holiday, San Diego Humane Society’s Project Wildlife admitted a bald eagle, the national bird of the United States of America. The magnificent bird was rescued and brought in by SoCal Parrots after it had been observed on the ground for a couple of days in Alpine.

The bald eagle is dehydrated, has been given fluids and also been treated for mites. While the prognosis is guarded, the bird’s condition is stable in the critical care unit at the Pilar & Chuck Bahde Wildlife Center.

It is extremely rare for San Diego Humane Society to admit a bald eagle. SDHS is hoping this majestic bird will respond well to its treatment so it can be released back into the wild soon again.

No other details about the bird’s condition were available.

At this time, the eagle is standing stronger and brighter. He was sedated Sunday morning for radiographs (X-rays) and a blood draw. He was also given fluids. Currently, he is breathing heavy, although slightly improved from intake. We submitted his samples of blood and feces for full evaluation, including a lead test.

Sunday afternoon, staff at the Pilar & Chuck Bahde Wildlife Center report they were able to successfully hand feed the bird. 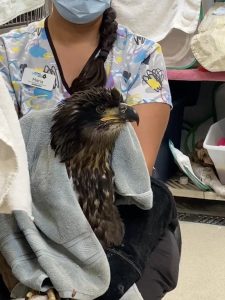 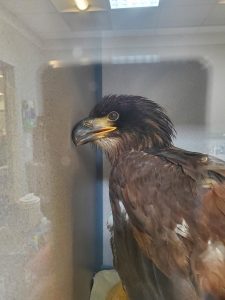 The bald eagle is a juvenile, a fledgling, who has not been seen flying on his own. The SDHS Project Wildlife goal is to provide him nourishment and stabilize him as quickly as possible, so he can return to his family before it may fly off.

The prognosis remains guarded. The bald eagle will remain in the critical care unit, where he receives extra oxygen.

What Do Your Teeth Have To Do With COVID?

Take Good Care of Your Body. It’s the Only Place You Have to Live: A Dental Health Series by Dr. Natalie Bailey and Dr....
Read more
Community News

County Edges Closer to Getting Off State Monitoring List

The County continues its recent downward trend in its COVID-19 case rate, meeting day two of three days required to get off the state’s...
Read more
Community News

Spice It Up, Coronado!

Pet of the Week: Paisley, a Tortie Point Siamese Mix for Adoption

Add Some Flair to your Home with a Little Paisley... Sweet and sophisticated Paisley came to the Coronado Animal Care Facility as a stray. This...
Read more
Community News

The 153 Coronado positive COVID-19 cases are cumulative since March 2020; and these reported cases are split between Coronado residential zip code (92118) and...
Read more

The latest Community Hero video from the Coronado Library’s Dive into Discovery Summer Reading Series. Thanks to Surf’s Up Studios for the video.https://youtu.be/ePfWJySojuk
Read more
Community News

Congrats to all who participated in the Coronado Cultural Arts Commission Public Art Walking Tour Giveaway, visiting public art and submitting selfies during the...
Read more
Letters to the Editor

Submitted by Pam WilsonCoronado Unified intends to present its Action Plan on Racism at their August 13 board meeting. This plan is in response...
Read more
Letters to the Editor

Submitted by Barry AustinAm I the only one to feel outraged that the Mayor and Council, under cover of restricted public involvement, gave away...
Read more
Letters to the Editor

Submitted by Carolyn RogersonThere are days when I cannot believe the vitriol to be read on the pages of Coronado publications or online. I...
Read more
Letters to the Editor

Submitted by Tim RohanEvents of the past few weeks have spurred me into action. I see a Council that is out of touch with...
Read more
Advertisement
Advertise Here (Get Rates)

Asante Sefa-Boakye is a lifetime Coronado resident who is committed to changing the world one day at a time...Certified in a program to help...
Read more
Education

The August “back to school” season is very different this year as all Coronado Unified School District (CUSD) schools prepare to start the school...
Read more
People

Five or six times a week, Coronado residents and Emerald Keepers Anne and Rick Wilcoxon can be found along Ocean Boulevard or on either...
Read more
Business

After years of planning, Erin Ayres opened her studio, Yoga on C, in the beginning of July. About a week later, Governor Gavin Newsom...
Read more
People