On Sunday, March 8th, Mrs. Eva Schloss will share her experiences as the childhood friend and step sister of Anne Frank, including accounts of the publishing of Anne’s famed diary. The presentation will take place at the Coronado High School auditorium and will be suitable for people of all ages including teenagers. Families of all faiths are invited to attend. This is a special opportunity to hear a first-hand account from someone whose life intersected with one of the most compelling figures in our history. 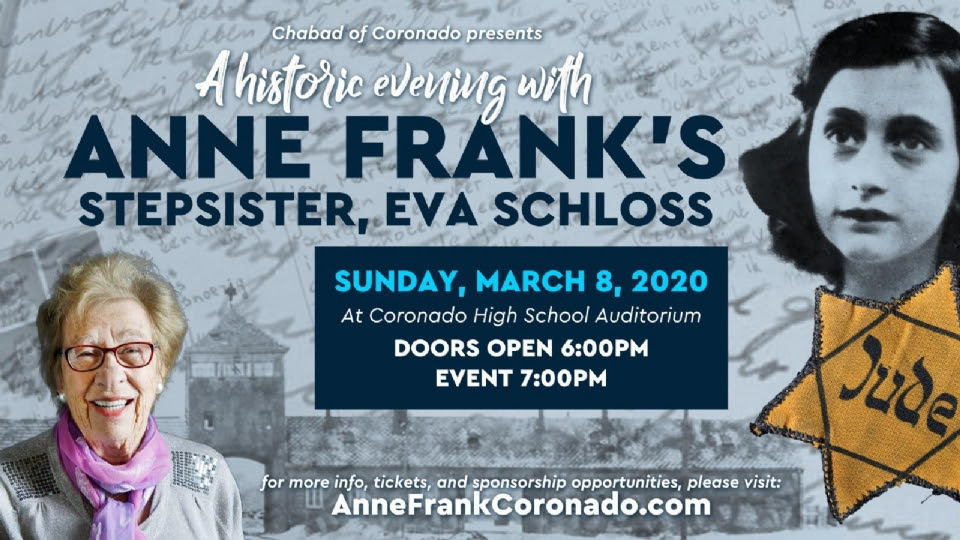 Chabad of Coronado is honored to sponsor the event. Tickets are available at: www.Chabadcoronado.com or via clicking the image above. Book signing of Eva’s book will be available.

In 1938, Germany invaded Austria, causing many Jewish families to flee Austria to avoid persecution. Among the emigrants was 8-year old Eva Geiringer, who with her mother, brother, and father moved first to Belgium and then to Holland, where one of her neighbors was a German Jewish girl of the same age. The two girls became friends and playmates (though, as Eva would say many years later, the girl was much more grown-up and mature than me). They passed the time by skipping, playing hopscotch and marbles, and drinking lemonade that the girl’s mother prepared.

Ultimately, both girls and their families were deported to the Auschwitz concentration camp. Later they would become step sisters. Eva survived her concentration camp experience and made her way to England, where she married Zvi Schloss and raised three daughters. She worked as a studio photographer and ran an antique shop. Her step sister did not survive Auschwitz, but kept a diary that did. Her name was Anne Frank. Since 1985, Eva Schloss has devoted herself to holocaust education and global peace. She has recounted her wartime experiences in more than one thousand speaking engagements. She has written two books and has had a play written about her life. In 1999 Eva signed the Anne Frank Peace Declaration along with United Nations Secretary General Kofi Annan and the niece of Raul Wallenberg, a legendary figure who rescued thousands of Jews in Budapest. Eva joins many courageous individuals who work tirelessly to end the violence and bigotry that continue to plague our world. Eva’s story is sensational and difficult to imagine, yet her insightful message reminds us that life is precious and fragile, that the creative spirit is stronger than fear, that the power of good is immeasurable, and that love makes a difference.

The 153 Coronado positive COVID-19 cases are cumulative since March 2020; and these reported cases are split between Coronado residential zip code (92118) and...
Read more
Community News

As the Dive Into Discovery Summer Reading Program comes to a close, kids and teens are invited to pick up their prizes during the...
Read more
Community News

Patrons of the Coronado Public Library now have access to books in 68 academic and public libraries throughout California and Nevada using the library’s...
Read more
Community News

Nothing is stopping this year’s Coronado Schools Foundation (CSF) Auction…not even a bad guy! During this year’s “Who Dunnit: A Coronado Mystery” themed event,...
Read more

Submitted by Carolyn RogersonThere are days when I cannot believe the vitriol to be read on the pages of Coronado publications or online. I...
Read more
Letters to the Editor

https://youtu.be/kYk5KTESLhEAs part of its efforts to reduce greenhouse gas emissions, the City has banned all gas-powered leaf blowers effective Jan. 1, 2021. Find out...
Read more
Letters to the Editor

Submitted by Ryan CraneI was interested to read the recent open letter from the Coronado Historical Association (CHA) in opposition to the Major Special...
Read more
Community News