Editor’s Note:  The original article has been corrected to show that Councilmember Heinze and NOT Councilmember Benzian expressed a dissenting vote regarding banning gas-powered leaf blowers. 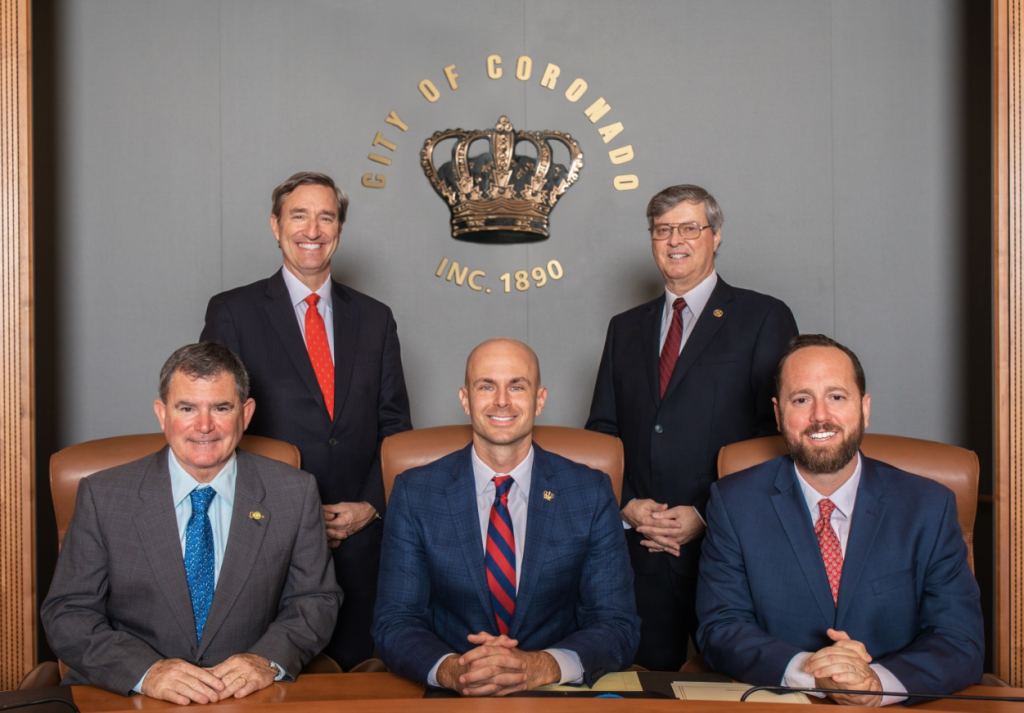 After a presentation by Rich Grunow, Director of Community Development, on the Golf Course Recycled Water Facility, three residents who live near the project voiced opposition citing cost, smell and aesthetics issues. Grunow pointed out that technical studies are needed to determine the best location from the three identified potential sites. The mayor noted that he understands residents’ concerns and the issues of smell and visual impact will be considered, but the city is in a favorable financial situation and this is a way to drought-proof the parks, medians and golf course. There was much discussion on this subject with Councilmember Sandke citing that this proposal dates back to the 1950s. The city has conducted informational workshops for residents in the area. Cliff Mauer pointed out that with today’s advances, the size of the building will be about the size of half a house with an attractive aesthetic. “The facility will be made to architecturally blend in.  It’s important to note that this is not a sewage plant. The heavy effluents will just be diverted, not treated at the new facility,” he said. The council unanimously voted to go forward with this project, but said this is just the first step, and there will be more analysis, followed by a 30-day comment period.

The ban on portable gas engine powered leaf blowers, with the goal of being more environmentally conscious, was again brought before the council. City Manager King explained that the city and golf course started this process in 2017 and it has been very successful. He was asked to explore a buyback program but said it is not feasible for a city of our size. There was much discussion on this topic with the mayor and Councilmember Heinze not in favor of the proposal. Councilmember Donovan said he looks at this as a long-term strategy and suggested that the proposed enforcement date be changed from January 2020 to January 2021, to give residents and landscapers additional time to adapt.  This passed with a 3-2 vote with the mayor and Councilmember Heinze dissenting.

The Council reviewed the annual request from the Chamber of Commerce to allow free holiday parking in all commercial zones from Monday, December 2, 2019 through December 25, 2019. Councilmember Donovan suggested starting the free downtown parking earlier, on Friday, November 29, to accommodate Black Friday and Shop Small Saturday shoppers. This was passed unanimously with the extended dates.

Cliff Maurer, Director of Public Services and Engineering, gave an overview of the proposed undergrounding agreement with the Coronado Beach Resort and surrounding area. The city was approached by the Coronado Beach Resort, which is a timeshare property with more than 2,700 owners, about undergrounding the utility lines on their property. Maurer pointed out that his department conducted research and found that it would be easier to go back down the line to the 1111 Adella apartment complex to underground these utilities. The city will work with the Coronado Beach Resort, Dave Sweeney from the apartment complex, and other residences in the immediate area including Ynez Place and Adella Avenue to contribute funds to this project. The city hopes to negotiate a cost sharing agreement and recoup 50 percent of costs of the estimated $1 to $1.5 million dollar project to underground the lines between eleven proposed poles. “The small size of this project makes it fall outside the approved Utilities Undergrounding Master Plan. This will have a significant impact on the aesthetics in the area,” Maurer pointed out.  This was unanimously approved and will be brought back before council with additional details before the project is started.

The mayor discussed the $25 million Transnet Funds from SANDAG that were designated for the proposed 2004 tunnel to alleviate congestion, which was voted down.  SANDAG wanted to reallocate the funds, but Coronado has been actively pursuing obtaining these funds for other projects. This week, the city sent a letter asking for the funds to be used for specific projects including a pedestrian underpass and traffic signalization enhancements along SR 75.

Mayor Bailey proposed that a subcommittee be appointed to assist the City Manager on the selection of a state lobbyist firm. He recommended Councilmembers Heinz and Sandke and they agreed and were unanimously approved.

In the City Manager’s Report, Blair King said that the city has joined Coalition of Local Governments and Agencies in filing comments to oppose the wireless industry’s attempts to take away control from citizens. “With City Council support, the city has entered into an agreement with Telecom Law Firm to submit comments to the Federal Communications Commission in opposition to proposed changes that allow the Wireless Industry Association to ignore locally adopted policies,” he said. Coronado was one of the first cities to adopt rules, in August 2018, to ensure that any wireless communications facilities installed in the city are sensitively designed and sited, this includes 5G technology.

Jim Krueger, Director of Administrative Services, presented the Interim Financial Report for the year ending June 30, 2019, which was unanimously accepted by the council. Some highlights include that revenues were up by $562,000 and expenditures were down by $1.7 million in the General Fund. The General Fund now has a reserve of $2,054,567 and he referenced three potential projects including the additional funds needed for the Ocean Blvd. project, enhancements in the Winn Room, and improvements for the Coronado High School Performing Arts Facility. 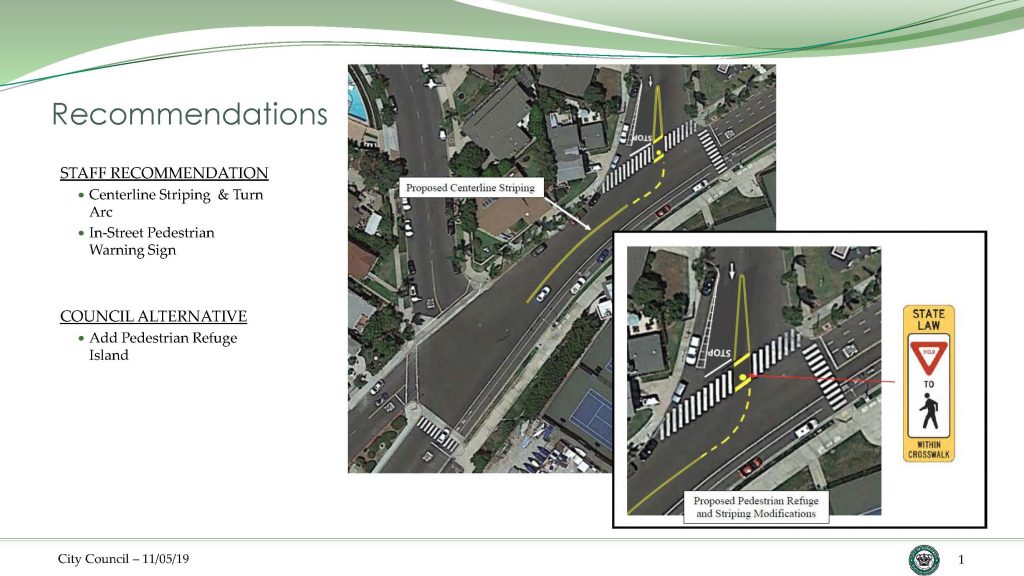 Principal Engineer Jim Newton gave a detailed presentation on the Five Points Intersection Improvement Project, which was continued from the July 16, 2019 meeting. There were six potential solutions identified to help traffic in this intersection, which ironically has only about one accident per year, but which is definitely confusing for pedestrians, bicyclists and motorists. The staff recommendation was to add a centerline stripe and turn arc with an in-street pedestrian crossing warning sign. This was a heavily discussed topic with residents also weighing in. Councilmember Sandke emphasized that safety is key in this complex intersection. Councilmember Donovan pointed out that is actually one of the safest intersections in Coronado and he supported looking into traffic patterns to determine calming measures for Glorietta Blvd. Councilmember Heinze also cited pedestrian safety and was in favor of closely monitoring the effects these changes would have. It was pointed out that these changes were easily accomplished, if that data didn’t support their improved safety. Councilmembers Benzian and Sandke wanted to address drainage issues and look at bulbouts and landscape options. The council ultimately passed this with Councilmember Benzian, who lives at this intersection, voting no. They also passed a second motion 3-2, asking for analysis from Psomas for calming measures on Glorietta Blvd with Mayor Bailey and Councilmember Heinze voting no.

The long and hotly debated Dog Park issue was next on the agenda with the recommendation to receive the report and take no further action at this time. Chairman of the Parks and Recreation Commission Akshay Sateesh spoke passionately about the work his committee has invested and wanted to further explore the feasibility of the six identified potential sites. They are: Ferry Landing Park, Early Childhood Development Center (ECDC) land, Glorietta Bay Promenade Park, Golf Course #15, Harborview/SDG&E Park, North Beach entrance/Central, and Mullinex. Councilmember Donovan commended the efforts of Satessh and the Parks and Recreation Commission but added, “We’ve been looking for a dog park site in the village for 10 years. We’ve beat this to death.” The council unanimously agreed to receive the results of the dog park site selection and design amenities criteria as a means to evaluate any potential future dog park sites, but not to proceed any further with this matter.

Principal Engineer Jim Newton was up again, and this time gave a presentation to incorporate items from the Active Transportation (ATP) plan into the annual city street preventative maintenance slurry project. The three proposed additions were:

Newton pointed out that notices were sent out to residents in these areas and no negative comments were received. Additional notifications will go out when the actual slurry projects are scheduled. After much discussion among the councilmembers, they unanimously approved these recommendations with the addition of adding sharrows from Adella Ave. to Glorietta Blvd. to help promote safety.