Cookies, Customers and Binder Clips: All in a Day’s Work for Matt Bartell 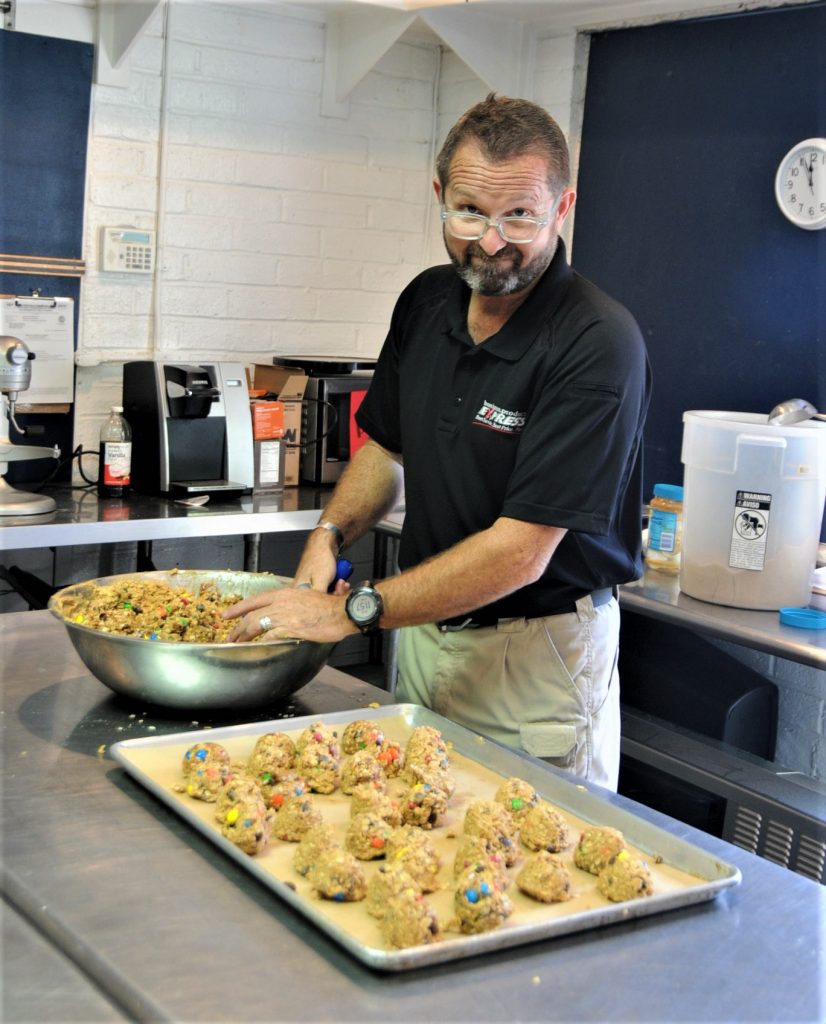 The path to the Marines for Matt Bartell came during his senior year in high school when the principal and his mom gave him an ultimatum ~ be expelled or join the Marine Corps. Two weeks later, he found himself in boot camp in San Diego while his classmates back in Oregon were attending prom. He graduated top of his class because the recruiter told him that would ensure he would get to select where he was stationed, and he was hoping for an overseas post. He ended up at the Marine Barracks on Naval Air Base Coronado and knew he had landed at the most amazing place. He rented a room at the Cherokee Lodge for a mere $200 a month, remember the year was 1984. After tiring of infantry duty, he transferred to the tank division and served in Desert Storm and Operation Iraqi Freedom. “I had a phenomenal time during my tours defending our country, because of the camaraderie with the members of my unit,” remembers Bartell.

So how did a decorated 20-year Marine go from driving tanks to selling office products? After he was medically retired, he needed to figure out how to take care of his wife Jodie and their three children. When a friend suggested that he could sell anything, he started with office supplies out of his house at 402 D Avenue. Things didn’t begin with a bang, when his first quarter only netted a $180 profit, he thought he had made the worst choice ever. Rather than give up, he persevered and started to get business accounts and became profitable in less than a year. Business Products Express expanded into the current location at 1019 C Avenue in 2009. He first sublet the warehouse portion of the building from Blue Bridge Coffee and later took over the whole building and opened the retail store in front. At first, he averaged four customers a day. Now, he helps 40 to 50 people, all looking for something unique, like arms for gaming chairs, a specific size envelope, printer ink, a Cross pen refill and more. If they don’t carry the item you are looking for, all you have to do is ask, and he and his staff will do everything possible to get it for you the next day. Even though the storefront is not his main source of revenue, his motto is “Treat everyone like family.” The majority of his clients are a variety of businesses, schools, and city, state and federal government entities.

“We are in a unique industry that is disappearing, but we want residents to know that we can supply almost any need they have without having to leave the island,” comments Bartell. He offers competitive pricing and shops local himself as much as possible. 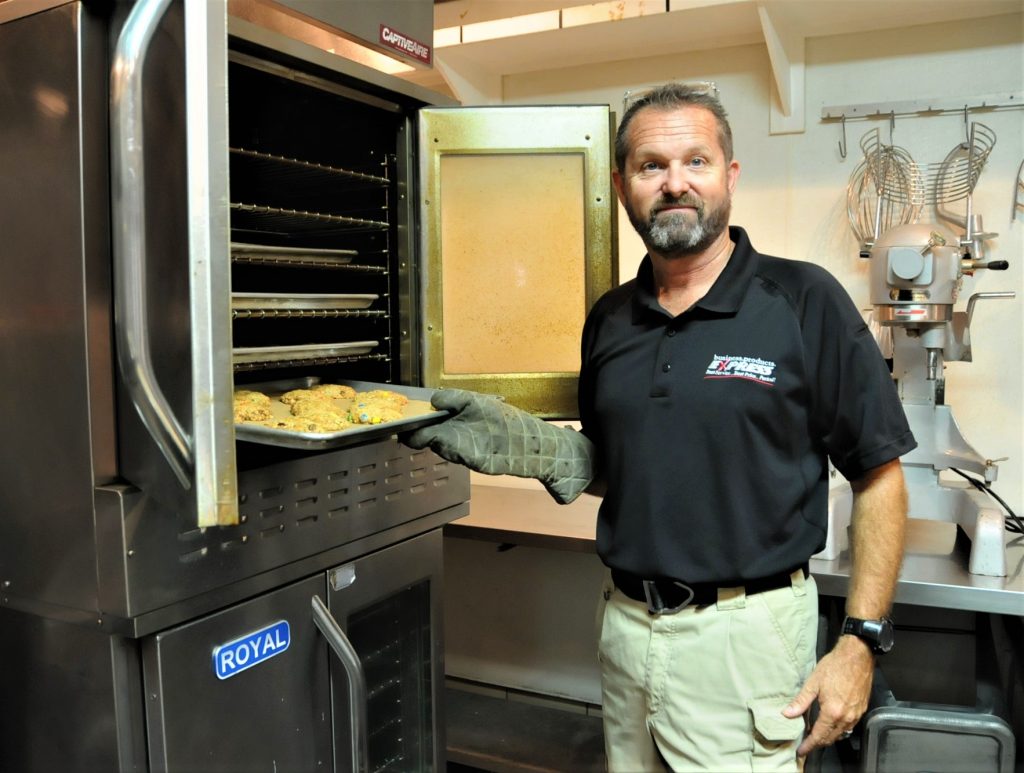 Customer service is one of the ways Bartell differentiates himself, and besides filling special requests for customers, he delivers his now famous Hannah’s Monster Cookies with each order. And that is a story that speaks volumes to the character of Bartell. He originally started with Krispy Kreme donuts, but then got the idea to switch when his daughter Hannah was five years old and he pulled out his grandma Casey’s recipe and modified it to its current deliciousness. “I remember my mom making this recipe, hiding lots of healthy stuff inside, and passing them out to cure boredom during long car trips,” recalls Bartell.  Shortly after starting the cookie business, he was asked to appear on the Roger Hedgecock radio show with Hannah and then later on the KUSI morning show.

He has been affiliated with the Coronado Chamber of Commerce for years, including past president, so when a member called him up said that someone was threatening to turn him in because the cookies were made in his home kitchen rather than a commercial kitchen, he was stunned. I think anyone’s first inclination would be to get mad and wonder why someone would go out of their way to be so spiteful, but he had a different approach. In 2009, he took a portion of his current space and turned it into an FDA and GSA certified kitchen, where he now makes more than 100 cookies each week. He also rents it out to other cooks and bakers who need a professional industrial kitchen. His Crown City Kitchen has served up everything from sandwiches to sushi, and had paleo treats concocted and Michelin Star chefs preparing meals. Ironically, Bartell admits he wanted to be a chef when he grew up and now he oversees cookie production.

Hannah and her two brothers, Harrison and Hudson, grew up baking cookies for their dad’s business and to fill other orders from realtors, friends, hotels and for holiday gifts. All proceeds go to the kids’ college funds. Hannah is now in college and plans to study equine therapy. Her brothers focus on playing water polo at Coronado High School and performing in their band Fearfully Made. As a family, they believe in giving back, and have established Coronado Hope, which helps an array of local charities.

The future of the store looks bright and Matt is hoping to grow the business by expanding into a print center. “We can create projects locally like you do online at Vista Print or over the bridge at Staples or Office Depot,” he says, and continues, “We can email, scan, fax, create flyers, handouts, business cards and bind books.” He believes in supporting those who support him and he gives back to many local organizations through his business.  Residents are encouraged to talk to him about supplying office products for their businesses, both locally and over the bridge. Business Products Express offers more than 250,000 products, including office furniture and equipment. 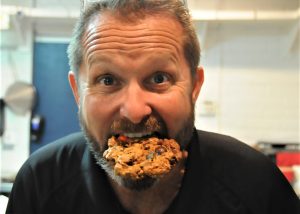 Did you know that you can order a single sheet of colored paper or a binder clip, and the crew at Business Office Express will deliver it to you with a Hannah’s Monster Cookie included?  When I learned this, I decided I need to stop biking to the store and order items for delivery, because the cookies are divine, chocked full of oats, m & m’s and other secret ingredients, and worth every calorie. You can order office supplies by phone (619)522-0211, on their website at www.businessproductsexpress.com or simply stop by the store to chat and pick up whatever you need.