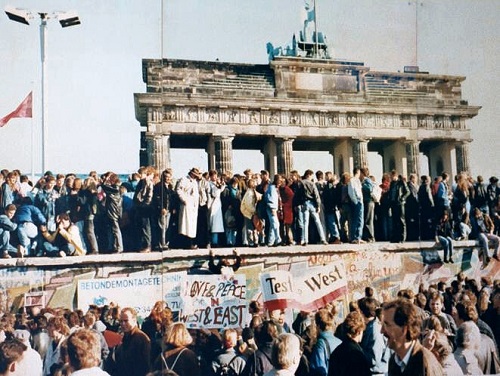 On 9 November 1989, Berlin was reunited. The Berlin Wall fell – the end of the massive border complex that left Berlin divided into East and West for 28 years, tearing apart families, friends and neighbors.

As the world prepares to commemorate this historic event, J. Elke Ertle will be at the library to discuss the factors that led to the construction of the Berlin Wall in 1961 and the dynamics that brought it down in 1989.

Elke, born and raised in West Berlin, was fifteen years of age on that summer day in August when construction of the Wall first began. She vividly recalls how West Berliners, whose city was no more than a tiny capitalist island within a large communist sea, were terrified of winding up behind the Iron Curtain. Elke will end the discussion by reading a brief excerpt from her memoir, “Walled-In: A West Berlin Girl’s Journey to Freedom,” that describes the panic, the doom, the confusion, the lack of reliable information and the rumors of collusion, under-the-table deals and nuclear war that swept thought the city.

MEMORIAL DAY SERVICES RETURN TO STAR PARK, MAY 31 By Joe DitlerMemorial Day has never been taken lightly by Coronado residents. It always carries with it...
Read more
Community News

Updated May 7, 2021 The City of Coronado Parks and Recreation Commission will hold a special meeting Monday, May 17, to provide an update on...
Read more

Think you can find your way through the Coronado Public Library’s virtual escape room? You have until October 30 at 12 pm to try!...
Read more
Community News

Did you get a chance to read the Coronado Public Library’s Murder Mystery Month prompt? Librarian Nick Burmeister wrote the beginning of Curtains in...
Read more
Advertisement
Sponsored Partner Links