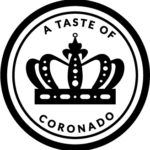 The Coronado Junior Woman’s Club celebrated A Taste of Coronado’s 10th anniversary by showcasing new restaurants, offering delicious bites and delightful cocktails from local chefs, and supporting a great cause on Thursday, Oct. 10. A widely popular event, Taste of Coronado sold out this year as it tempted patrons with tastes from Coronado’s newest restaurants such as Little Frenchie, The Henry, Clayton’s Bakery, and The Del’s Serea, as well as old favorites.

A Taste of Coronado is an annual tradition for many local Coronado residents who enjoy the offerings of both old and new restaurants and spending time with their neighbors. Tourists also enjoyed the event by taking advantage of the great discounts and packages from Crown City Inn & Bistro and the Glorietta Bay Inn that offered “taste and stay” promotions.

It had been a couple years since I enjoyed the Taste of Coronado event and was very much looking forward to enjoying the festivities with my son Sean, who loves eating out in Coronado. He commented on how cool it was to be able to get a little taste from so many different restaurants and was pleasantly stuffed by the end of the evening. “The Taste of Coronado was great,” said Sean, “my favorite was the Brigantine fish tacos and Serea’s Octopus and Miguel’s Empanada, though McP’s stew was really good too!” We chose to walk the entire length of the restaurants making a loop from Rotary Plaza toward the Del and then down to the Ferry Landing and back rather than using the complimentary shuttle. Walking helped us take a break before continuing the feast. I would say that Little Frenchie’s Onion Soup and Cava combination, Clayton’s Mexican Takeout Carne Asada Taco and Leroy’s Chicken Bahn Mi toast paired with Green Flash Brewing’s tropical IPA were my favorites. Though what really topped off the night for me was the Neck and Shoulder Massage at Coronado Bliss by Merlot Bryans. The lavender oils and relaxing atmosphere was a wonderful break.

Many took to social media to share photos and thoughts on the event, including Leanne McDowell who joined a group of friends and shared photos and favorites saying, “I think our top 3 were: Clayton’s Mexican Chicken Chipotle Street Tacos, Clayton’s Bakery and Bistro and The Henry. Nicky Rottens was also good and Gelato Paradiso got our favorite vote among desserts.”

Rachel Parr shared photos of evening and said, “Enjoyed the Taste of Coronado with some friends this evening! A little sweet, a little savory and a little tipsy (just kidding)! there were 30 places total and we made it to most… we all left with very full bellies!”

According to Taste of Coronado’s website, proceeds from this year’s event will support “Camp Able, a non-profit organization dedicated to the empowerment of the disabled community through an increased appreciation and awareness of ABILITIES in an incredibly fun and safe aquatic environment. Camp Able provides services that help contribute to the vitality of its campers while fostering compassion and respect for all.”

Participating restaurants & businesses in A Taste of Coronado 2019:

Is ordering out becoming a way of life for Coronadans? It seems to be that way for Coronado Optimists and Rotarians who...
Read more
Business

Coronado lifeguards posted warning signs to let the beach-going public know that a mature White shark was observed just off the shore in the...
Read more

Coronado Island Film Festival (CIFF) returns for its fourth year, bringing with it a variety of films, panels, parties and workshops for attendees to...
Read more
Community News

In the wake of recent deaths and lung illness cases caused by vaping, or the use of e-cigarettes, the Center for Disease Control (CDC)...
Read more
Military

Coronado Cays park was filled with hundreds of residents and friends of the Cays on Saturday Sept. 28, as they celebrated the Cays turning...
Read more
City of Coronado

Mayor Richard Bailey has been making the rounds, conducting informative town hall meetings all over Coronado, with his most recent event held in the...
Read more
Travel