The Library Book Selected as the 2020 Coronado Community Read 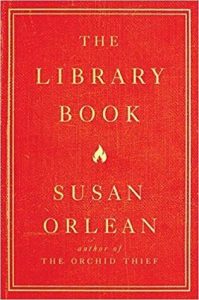 The Coronado Public Library is proud to announce the title selected for the 2020 Coronado Community Read: The Library Book, by Susan Orlean. In The Library Book, Orlean chronicles the devastating fire that struck the Los Angeles Public Library in 1986 and its aftermath, to showcase the larger, crucial role that libraries play in our lives and tell the broader story of libraries and librarians. As the Coronado Public Library celebrates its 130th anniversary and the Friends of the Library celebrates their 50th anniversary in 2020, the Community Read will launch a year of celebration and reflection with a story that reminds us that even in the digital era, libraries are more necessary than ever.

In 1986, in the middle of an ordinary April morning, a disastrous fire struck the Los Angeles Public Library. The fire reached 2,000 degrees and burned for more than seven hours. By the time it was put out, it had destroyed 400,000 books and damaged 700,000 more. Investigators descended on the scene, but more than thirty years later, the mystery remains: Did someone purposefully set fire to the library—and if so, who?

In telling this story, The Library Book explores the evolution of libraries across the country and around the world, from their humble beginnings as a charitable cause, to their current status as a cornerstone of national identity. It also delves into arson and the attempt to determine the fire’s cause, and examines the case of Harry Peak, the blond-haired actor long suspected of setting the fire. Along the way, we meet a cast of characters from libraries past and present, and reflect on our own experiences in libraries. We also explore the work libraries do every day to ensure that their institutions remain a vital part of the cities they serve.

Author Susan Orlean is an award-winning reporter and staff writer for The New Yorker magazine and a New York Times bestselling author of seven books, including The Orchid Thief, Rin Tin Tin, and Saturday Night. She attended college at the University of Michigan and worked in Portland, Oregon and Boston, Massachusetts as a writer for various magazines before landing in New York. She lives with her family and her animals in upstate New York and Los Angeles.

The Library Book is a Washington Post Top 10 Book of the Year and a New York Times Notable Book of 2018. It was selected as the 2020 Coronado Community Read after community vote among five titles, selected from more than 100 nominations. The voting took place throughout the month of August and concluded on September 13. Three hundred seventy-five ballots were cast in various locations around town, as well as online, and it was a tight race between The Library Book and Red Notice, a close contender. The other finalists were Sapiens, The Last Days of Night, and Killers of the Flower Moon.

The Coronado Community Read is a library program aimed at bringing the entire community together through the shared reading and discussion of one book.  Join us from February 21 through April 3, 2020, for community book discussions, film screenings, workshops, music and other programs to celebrate libraries and The Library Book. Stay tuned for more details about the 2020 Coronado Community Read program, and join us for a fascinating exploration of how much more than books our libraries provide for us—and why they remain an essential part of the heart, mind, and soul of our communities.

The Coronado Community Read is made possible by the Coronado Cultural Arts Commission and the Friends of the Coronado Public Library. If you are interested in hosting a book discussion or otherwise participating, please contact Franklin Escobedo at fescobedo@coronado.ca.us or Kelly Purvis kpurvis@coronado.ca.us.

Coronado’s Christ Church Thrift Shop will be open outdoors on Saturday, August 8 during its usual hours of 10 AM to 1 PM. It...
Read more
Community News

Take a Fresh Look at Coronado at OrangeAvenue.com!

While summer is traditionally the season we excitedly vroom off on a road trip, fly to a distant shore or explore a new city...
Read more
Community News

According to San Diego County public health officials, six out of every 10 adult San Diegans are at extra risk for severe illness should...
Read more
Community News

Pet of the Week: Stella, a Black/Mocha Cat for Adoption

Let Your Stars Align with Stella... Beautiful and vivacious Stella came to the Coronado Animal Care Facility when her family could no longer care for...
Read more
Community News

The 117 Coronado positive COVID-19 cases are cumulative since March 2020 and these reported cases are split between Coronado residential zip code (92118) and...
Read more

Are you running out of things to read? Did you want to watch a movie that is not on streaming services yet? Do you...
Read more
Community News

The Coronado Library is offering alternative services to continue serving the community during the period of closure. The library will provide curbside service so...
Read more
Community News

For those who never seem to have enough time to read a library book before the lending period ends, the Coronado Library has introduced...
Read more
People

The Coronado Public Library and the Coronado Cultural Arts Commission are proud to announce the six finalists for the 2018 Coronado Community Read. The...
Read more

The Coronado Public Library will resume its normal open hours on Friday, September 9, following the power outage which caused the early closure of...
Read more