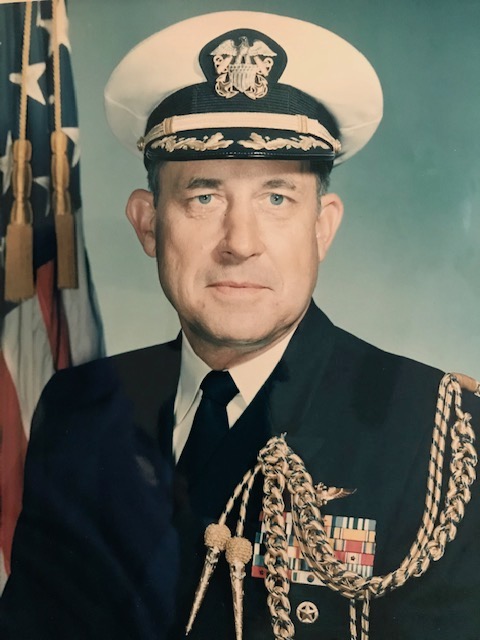 Captain Donald B Edge, USN, (Ret) made his “Last Take Off,” August 28, 2019. He was born in 1922 in Laverne, Iowa and raised in Emmetsberg, Iowa. He received a scholarship to Kemper Military School and was subsequently given an appointment to the Naval Academy. At that time, all midshipmen completed graduation in three quick years to help the World War II effort, so while he was a proud member of the Class of ’45, he graduated in 1944. Don was married that same year to the former Beverly Beale Feldmann, but he had little time to enjoy his new status before he was immediately assigned to the cruiser USS Canberra (CA-70) in the Philippine Seas.

In his first few months, an aerial torpedo struck the engine room and 23 were killed instantly. The crew managed to save the ship from sinking and was utilized until the end of the war. After subsequent duty on the light cruiser, USS Montpelier, the 22 year old decided aviation would be his future.

Flight training was completed in 1947 at NAS Corpus Christi and concurrent aviation duty brought him to NAF Charleston, RI, and Quonset Point, RI. In 1950, Don headed to Pensacola, FL to become a flight instructor. He was subsequently offered a flight position at NAS North Island in February of 1952. Unfortunately, the young pilot found the rents to be too darn high in Coronado, so he quickly got permission to head to NAS Moffet and packed his young family off to Mountain View, Ca. He reported to VC-3 in March of ’52 and deployed on the USS Philippine Sea (CVA-47) and later the USS Hornet (CVA-12) during the Korean Conflict. He was awarded the Air Medal with three Gold Stars in lieu of three addition awards for “meritorious achievement in aerial flight.”

In 1955, Don was assigned as Associate Professor of Naval Science, NROTC, University of Nebraska. He then returned to Palo Alto and attended the graduate school of Stanford University where he received his Masters of Arts Degree in Education in June of 1959. After a tour as a student in the RAG at Miramar, Don reported as XO then becoming CO of VF-213 again at NAS Moffet Field, which deployed with the USS Lexington (CVA-16). Following his West Pac tour, Don completed two years as Air Operations Officer on the USS Bon Homme Richard (VA-31),  then further training and duty aboard the USS Constellation (CVA-64) as Air Wing Commander. Orders to NAS Miramar brought him back to southern California and apparently reasonable rents in La Jolla. While on the Connie, his Wing was awarded the Navy Commendation and the Armed Forces Expeditionary Medal for conducting the first air strikes against North Vietnam.

The next duty station was at the Pentagon with the staff of the Joint Chiefs of Staff as a J-3 action officer in the Pacific. Don happily left the DC area in 1967 to assume command of the USS Kawishiwi (AO-146), a fleet oiler out of Pearl Harbor to refuel 7th Fleet ships.

In March 1968, Don joined the staff of COMNAVAIRPAC at NAS North Island and then next assumed command of NAS North Island. His final tour was as Chief of Staff for COMCARDIV Three with the USS Ranger (CVA-61) out of Alameda, Ca.

He accumulated over 4,246 flight hours in 15 different aircraft and 1,615 fixed wing carrier landings.

Following retirement from active duty, Don and Beverly purchased a new dock-side home in the Coronado Cays where they both enjoyed friends and family on their boat and yearly cruises abroad. He helped start the “Wheezers and Geezers” tennis group in the Cays and played with them for over 30 years. He obtained his real estate brokers license and never let a weekday go by without checking his stock options. He was active in the Navy League, Tailhook, the USNA Alumni Association, the Naval Aviation Museum Foundation, the “Coronado Unconcerned Citizens,” and honored to be selected to the prestigious “Golden Eagles of Naval Aviation.”

Captain Edge was predeceased by his wife of over 65 years Beverly (particularly proud of being a Navy wife and loving mother) in 2010. He is survived by his four children: Debbie Beauchesne (Charlie), Don Edge (Chloe), Diane L Edge DDS (Ruth) and Dorian Edge, as well as five grandchildren and five great grandchildren.

Always proud, Captain Don Edge loved the Navy, flying and service to his country. He was also cherished as a father, grandfather, husband, friend and peer. He will be missed. Internment services will be held at Fort Rosecrans National Cemetery, 1700 Cabrillo Memorial Dr., San Diego, CA 92106 on November 8, 2019 at 11:30.