Grand Chef Throwdown: Outstanding Food for a Life Changing Cause

Cystic Fibrosis is an important cause in the life of Wayne Harth, even though he has no friend or family connection. His support started 25 years ago, when he met Sylvia Margolies from the Chicago Cystic Fibrosis Foundation (CFF) while working at the Fairmont Hotel there. He had no idea how much one lunch would change the trajectory of his life. “She was so energetic and compelling and invited me to get involved with just one fundraiser, and from there she mentored me in many aspects of special events and fundraising, and I’m still bonded with CF,” he comments.

When Wayne came to San Diego four years ago as Hotel del Coronado’s Director of Membership and Special Events, he quickly connected with the San Diego Chapter of the CFF and proposed creating a spin-off event here. The Del was equally supportive and the Grand Chef Throwdown was launched here and has been a success each year, raising approximately $100,000, which he hopes to double by next year. The first event hosted 20 chefs and this year will feature 34 of the top-acclaimed chefs in San Diego and Baja vying for the coveted awards. To help pull off this event, Wayne reached out to noted Chef Flor Franco for help the first year and she has been involved ever since. Wayne’s specialty is logistics, set-up and décor, with Chef Flor Franco securing the celebrity chefs and judges and the CFF staff coordinating a host of volunteers who make this event a reality which involves more than six months of planning. 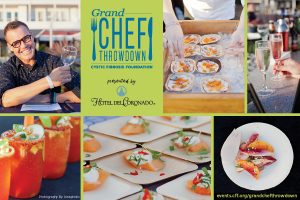 This is a not-to-be-missed epicurean event for all foodies on Friday, September 13 from 6 pm to 11:30 pm, with the evening starting with delicious tastings from notable chefs on The Del’s Windsor Lawn overlooking the beach. “If you leave hungry, it’s your fault, because the evening offers an abundance of great food, wine and cocktails,” emphasizes Wayne, who doesn’t cook, but appreciates good food. This progressive fundraiser will award a “People’s Choice Award” and a Culinary Council of celebrity top chefs and food critics, awarding the Chef Flor Franco Awards for Culinary Excellence.

This is an opportunity to discover what’s new and trendy on the San Diego food scene and reconnect with old favorites, as guests gather to relish sweet and savory chef tastings, sample craft cocktails and sips from wineries on both sides of the border. Silent auction items include art, vacations, hotel and restaurant gift certificates, and other valuable items. A three-course gourmet dinner, prepared by The Del’s Chef Stefan Peroutka, follows in the oceanfront ballroom, where the culinary awards presentation and program will commence. The ballroom then transforms into Night CAP, the evening’s after-party, and will feature entertainment, desserts, and craft cocktails. The live auction will feature “52 Weeks of Dining for  ,” amazing U.S. and overseas trips, a variety of experiences, including chef’s private cooking events. Last year, a lucky winner enjoyed a paella experience for 35 people. A variety of ticket options, which are partially tax deductible, can be purchased by visiting  GrandChefThrowdown.com

After 25 years, Wayne is not stopping his support of CF until there is a cure for everyone.  He adds, “CFF is transforming cystic fibrosis from a deadly childhood disease to the best story in medicine. Where many years ago a CF diagnosis meant a life expectancy of 10 years old, today, people with CF are achieving milestones like going to college and starting families of their own and even having grandchildren. There is still more to do, and we can’t do it alone. We invite everyone to join us for the Grand Chef Throwdown to help us make CF stand for Cure Found.”

The Grand Chef Throwdown will benefit the Cystic Fibrosis Foundation, the world’s leader in the search for a cure for cystic fibrosis and donor-supported nonprofit organization. The Foundation funds more CF research than any other organization, and nearly every CF drug available today was made possible because of Foundation support. For more information on this life changing organization, please visit www.cff.org or contact Michelle Gilmore, Senior Development Director at [email protected].  Stay tuned for more details about this not to be missed culinary event that truly makes a difference.