Years ago, A. Lawrence Vaincourt penned, “Just a Common Soldier”. His sentiments capture the essence of Memorial Day – a time when old soldiers and sailors gathered then, as now, to pay homage to their fallen comrades. The poem starts with the following:

He was getting old and paunchy
And his hair was falling fast,
And he sat around the Legion,
Telling stories of the past.

Of a war that he once fought in
And the deeds that he had done,
In his exploits with his buddies;
They were heroes, every one.

The poem ends with:

If we cannot do him honor
While he’s here to hear the praise,
Then at least let’s give him homage
At the ending of his days. 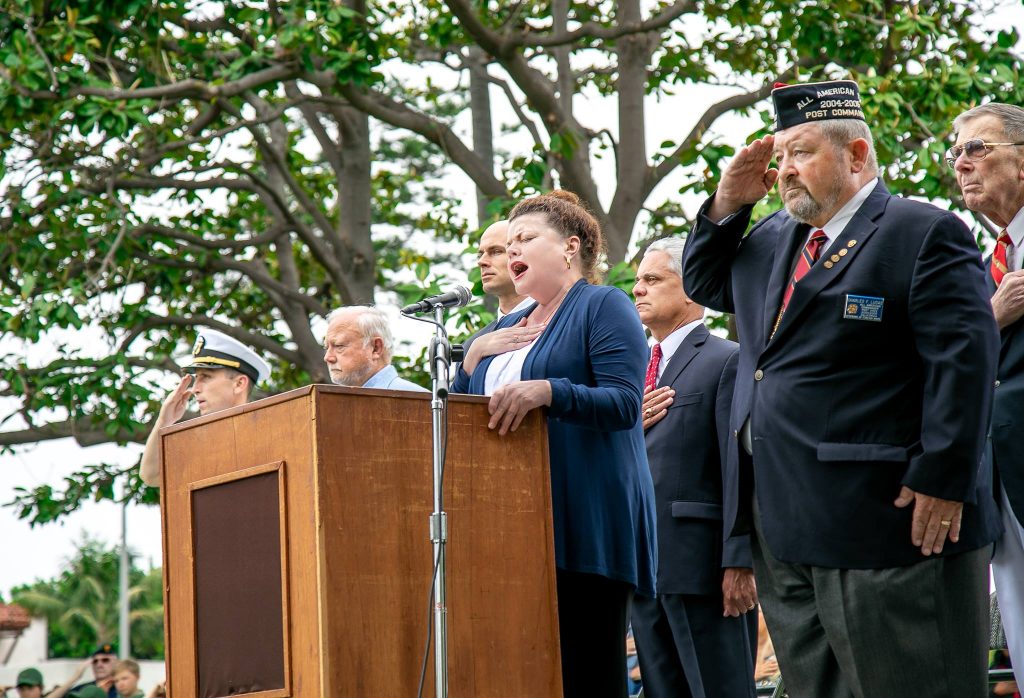 Indeed, Memorial Day is a time to remember and a time to pay homage, a time to honor our soldiers and sailors. This year, services will take place on Monday, May 27, at Coronado’s Star Park, hosted by Coronado Post 2422 of the Veterans of Foreign Wars.

The keynote speaker on Monday will be Rear Admiral Bette Bolívar, USN Commander, Navy Region Southwest. A career diving officer, RDML Bolivar serves as a special operations officer (explosive ordnance disposal/diving and salvage). She is a 2005 inductee into the Women Divers Hall of Fame.

As in years past, the keynote speaker will be accompanied by a Presentation of Colors, Taps, and singing of the National Anthem. Representatives from all branches of the military will be present and asked to stand and be recognized. This brief ceremony is a very touching Memorial Day salute to our fallen military.

Being a military town, Coronado responds accordingly to events such as the Memorial Day services in Star Park. Fittingly, those in attendance grow in number each year. While there are fewer of the older generation, we are seeing more children – grandchildren and great grandchildren of these veterans – in attendance.

Comments from last year’s guest speaker, RDML Michael Giorgione, still ring true. He said, “This morning, when you see the wreaths displayed, react to the gun salute and hear the trumpeter sound taps, please remember them. Free your mind briefly from our daily clutter and give thanks for someone’s ultimate sacrifice. Open your heart and be with the families and friends who no longer celebrate any holiday together with us. Let your patriotic pride swell and be one people in this park today. Together, we are one, we are freedom-loving patriots, we are Americans.”

Memorial Day ceremonies begin at 10 a.m. and last just under one hour. It is recommended that seniors and disabled arrive early to take advantage of the limited seating available. As in years past, area Scouts will hand out small American flags to those in attendance. Families are encouraged to bring younger children, and to wave your flags proudly.

Parking is available on adjacent streets to Star Park. Some, however, choose to walk or ride a bike.

Many individuals and groups work behind the scenes and during the event to help create this very special occasion. Among those helping this year are singer Jo Beth Cosgrove, Scout troops 801 and 806, Coronado High School’s NJROTC, the Marine Corp Band of San Diego and the Recruit Depot Honor Guard.

Coronado VFW Post 2422, while being the primary sponsor and organizer of this event, annually receives support from other major sponsors such as the United States Navy League, Coronado City Council and the Military Officers’ Association of America (Silver Strand Chapter).

Following the Star Park gathering the public is invited for light refreshments at VFW headquarters (557 Orange Avenue). For more information on the Coronado VFW Memorial Services on May 27, contact Michael Turner at (619) 865-4809 or mturner003@san.rr.com.

“When I was a young boy, my father took time to teach me how to use tools, how to build out of wood,” said...
Read more
Obituaries

If we were pressed to bestow titles on Virginia and Bill Killingsworth, one might be, “Coronado’s Duchess and Duke of Fine Hairstyling.” For half...
Read more
Advertisement
Advertise Here (Get Rates)