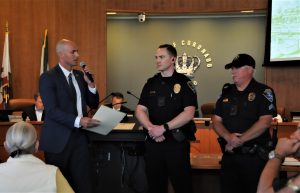 Mayor Bailey presented a proclamation to Corporal Bill Canet and Officer Kevin Engelke honoring May 15 as Peace Officers Memorial Day. He also mentioned that the City of Coronado respectfully pays tribute and remembers the sacrifice of Lieutenant Frank Greene, killed in the line of duty on October 12, 1954. In 1962, President Kennedy proclaimed May 15 as National Peace Officers Memorial Day and the calendar week in which May 15 falls, as National Police Week. Established by a joint resolution of Congress in 1962, National Police Week pays special recognition to those law enforcement officers who have lost their lives in the line of duty for the safety and protection of others. Coronado thanks their Police Department for all that they do for the public safety. 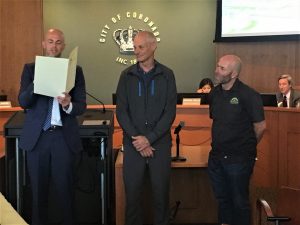 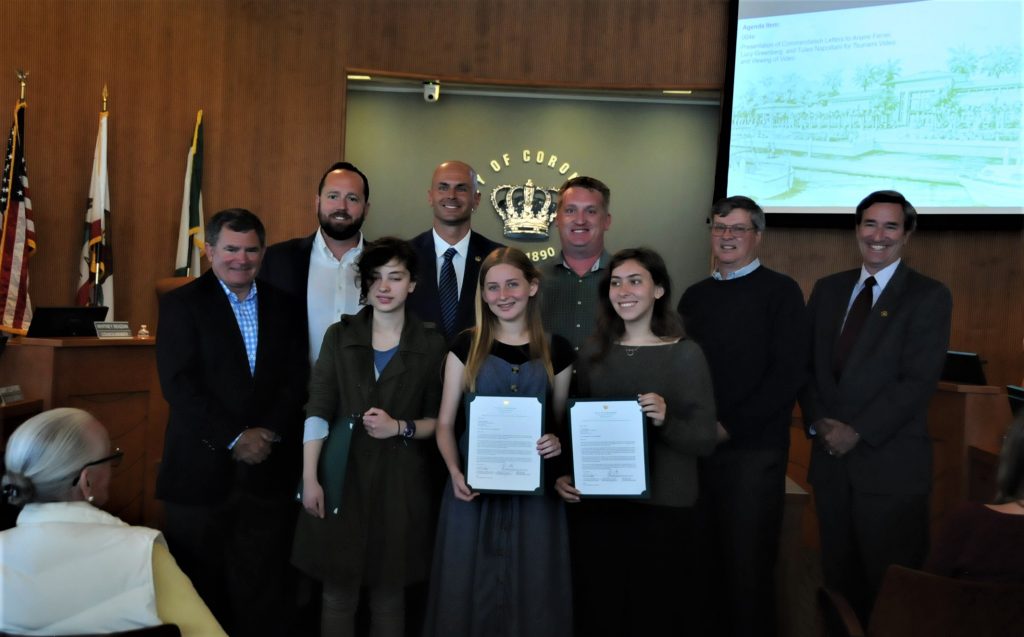 The award winning “Surviving Killer Waves” tsunami video was presented. It was created by CHS students in BK Manning’s animation class, Ariane Ferrer, Lucy Greenberg, and Tulasi Napolitani. The mayor gave the girls a commendation for their video.

The Community Grants process has been an ongoing topic, and the council decided on changes to the existing process as recommended by the subcommittee consisting of Mayor Bailey and Councilmember Donovan. Members of Coronado SAFE, Chamber of Commerce and Coronado MainStreet offered their ideas for enhancing the process with changes to the new proposal. Councilmembers agreed that they were definitely moving in the right direction, but there would be tweaks along the way. One major point of the $1 million cap or one percent of the budget was revised to be a recommended goal. The mayor addressed criticism about what other cities give in community grants and he cited similarly sized cities as examples: Beverly Hills gives $50,000 and Del Mar gives $75,000. Mayor Bailey stated, “Many organizations have grown financially dependent on the city at potentially the detriment of new groups.” Councilmember Benzian added, “Everyone should re-examine how they are doing business and always look for other sources of funding.”

After much discussion, a few policy and application changes were made, and the council unanimously approved it. Donovan said, “Next year this can be revisited, and we may want some fresh eyes looking at it.”

The longest portion of the meeting was Oral Communication. Of 29 people that spoke, 28 addressed the Logos Youth Center. Twenty-five of those in favor of the project, including seven teenagers, were asking the city council to reverse last month’s denial of a Major Special Use Permit (MSUP). Three residents spoke in favor of leaving the vote in place and cited a petition that was signed by 150 people in agreement with denying the project.  Those in favor of the project were members of the Graham Memorial staff, parents, kids and others involved in youth outreach citing the need for a safe place for teens to hang out in Coronado and asking for this donated project to go forward.

After public comment, Mayor Bailey stated that since it wasn’t an agenda item there was nothing that could be done at this time; and with a 2-2 vote on this issue, one of the city council members would have to bring it forward to be brought before council again.

Mayor Bailey mentioned several SANDAG items. The first was the preliminary Regional Housing Needs Assessment (RHNA) number of 1800 additional units to be built that would be catastrophic to Coronado. He will be working to get these numbers reevaluated to a more manageable size. He also explained that after the 2004 TransNet expansion passed, $25 million was designated for congestion relief and this year SANDAG is trying to reallocate those funds. He will be working to get these designated funds for Coronado.

Ed Walton, PE, City Engineer, gave a history of the Coronado Cays Blvd. and Bayshore Bikeway Signage project which had changes made in 2016, and pointed out that city staff recommended no further action needed to be taken. But both the Bicycle Advisory Committee and the Transportation Commission recommended the installation of “Cross Traffic Does Not Stop” signs and pavement markings on the bike path prior to the intersection. Several Cays residents spoke in favor of the signs stating the dangers that exists between cars and bicycles at that intersection. Councilmember Heinze, who lives in the Cays, agreed and made the motion to put up the two recommended signs. The council unanimously approved this expenditure which should be less than $1,000 in material costs, with installation completed by public services staff and paid for by the street maintenance account. 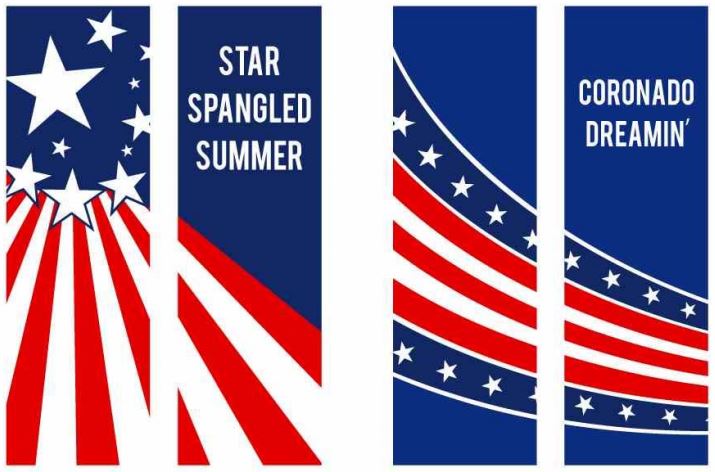 Due to time constraints, several agenda items were continued to the next Council meeting, including: the City Manager’s report, Ocean Blvd sidewalk and street improvements, and the Nixle Public Notification Policy.