MotorCars on Mainstreet Brings the Crowds to the Chrome (Video) 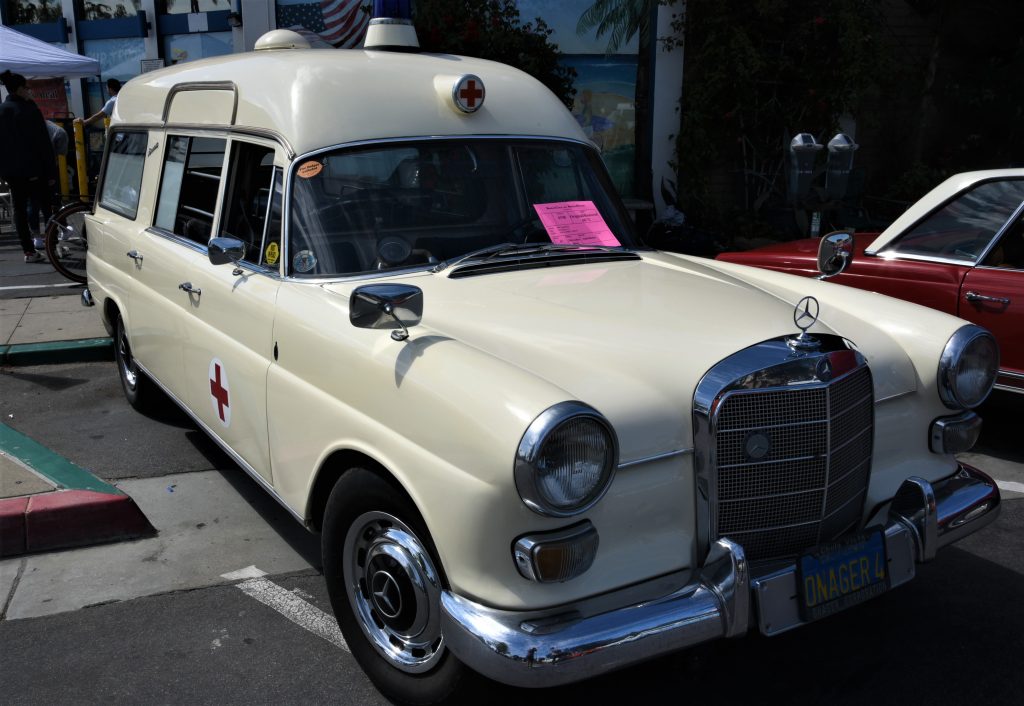 There was no shortage of show-stopping cars to appeal to everyone’s tastes at the 29th annual MotorCars on Mainstreet. More than 400 pre-1973 vehicles took center stage in downtown Coronado showcasing shiny paint, chrome motors and other tricked out and original features. There were cars and trucks from street rods, woodies, convertibles, to everything in between, with some extremely snazzy rides from right here in Coronado. Parked at the start on Isabella Ave was a 1967 Mercedes 230 ambulance reminiscent of Ghostbusters. 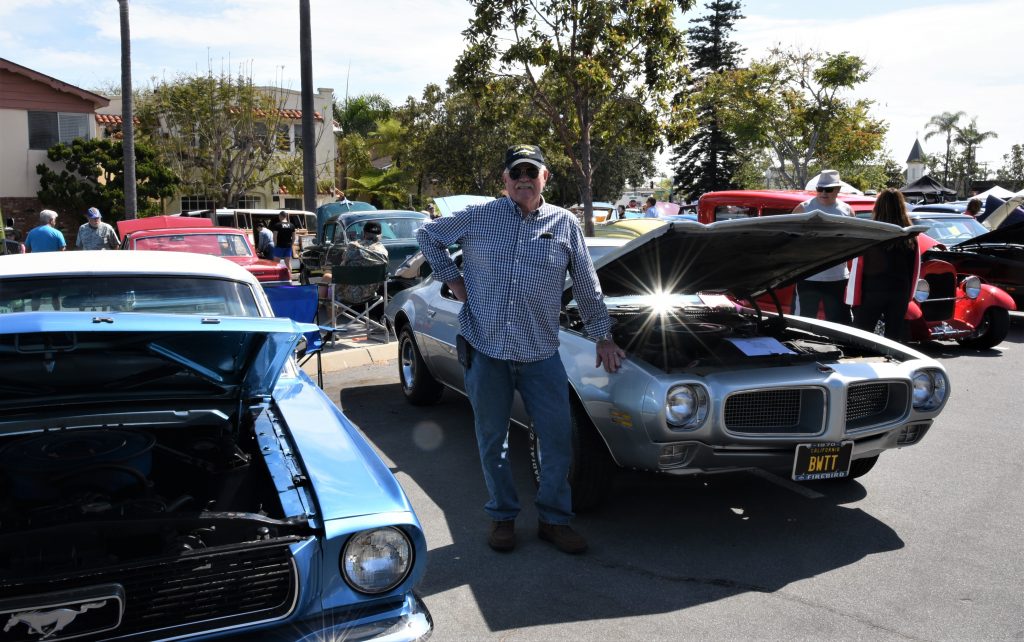 “This is the only new car I’ve ever bought in my life,” says Bear Thorkelson, of his 1970 Pontiac Firebird. He and his wife Ginny moved to Coronado in 2009. A naval flight officer on F4 Phantom airplanes, Bear drove his beloved car wherever the Navy sent him from California to Georgia and other places and back again several times. He has all the original paperwork and has been in this car show since 2013. His other cars throughout his life have either been company cars or purchased used. 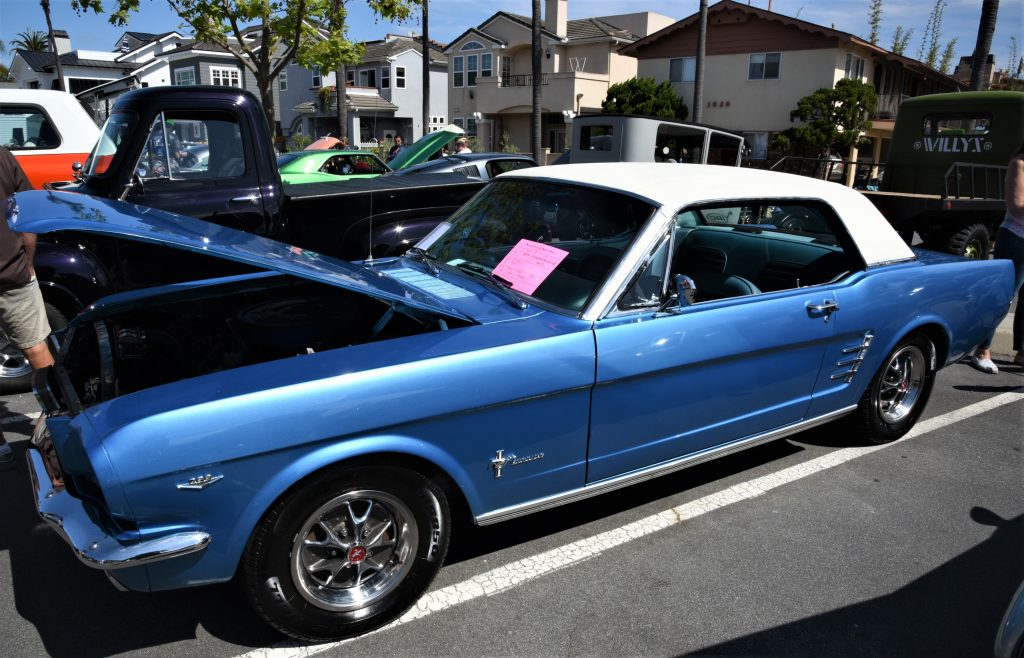 Ginny’s daily driver is a shiny blue 1966 Mustang with white vinyl top and only $126,000 original miles on it that she got more than 20 years ago. Bear laughs as he explains his name, “My wife calls me ‘Bear’ because I growl and sleep all winter. My given name is Bruce William Theodore Thorkelson, after my two grandfathers.” 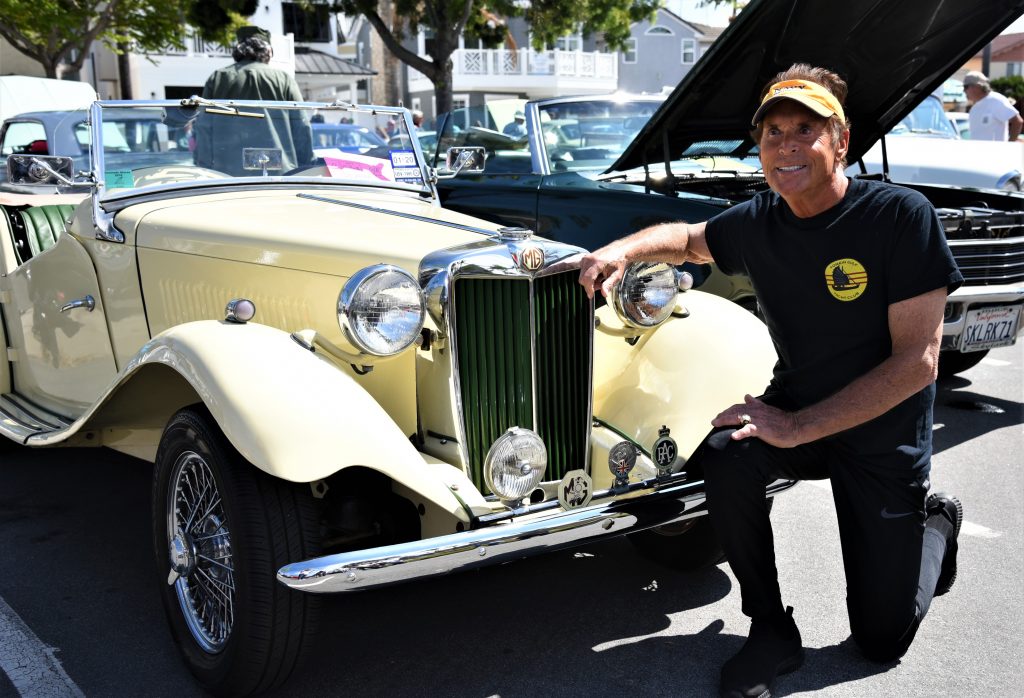 This classic 1952 MG TD was found by local resident Jon Schiff in a barn in West Texas in 2014. “It was in rough shape and I restored it back to its original glory,” he says. Back in 1964 while in dental school in Indiana he had an MG, but had to part with it when the Navy sent him to Japan. John was a Naval dentist who is honored on the Avenue of Heroes. “I never forgot that car and told myself that someday I would have another one.” It took a few years, and he now treasures this car. 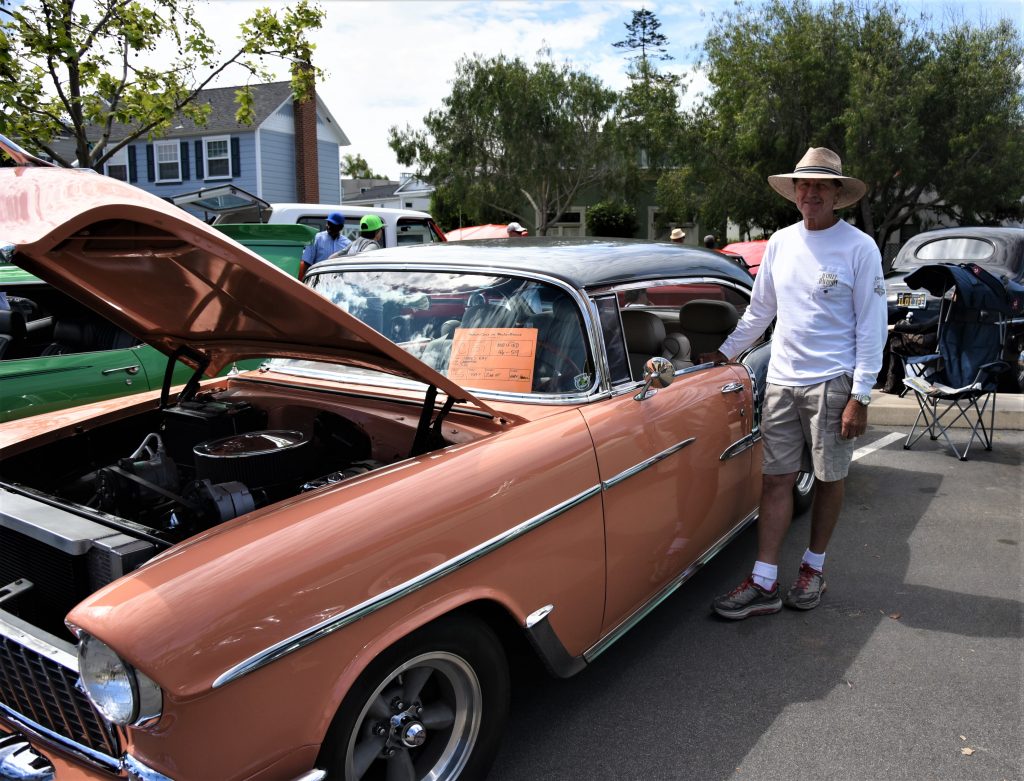 “A project of love” is what Jim Ray calls his ’55 Chevy Bel Air two door hard top. It took him 15 years to completely rebuild it and he did most everything himself from the electrical to the painting. “Everything is restored with the original gray/coral color combination and a few modern touches like a new motor, transmission and air conditioning,” he comments.  Jim just moved to Coronado last August and can be seen cruising around town in this sharp looking automobile. 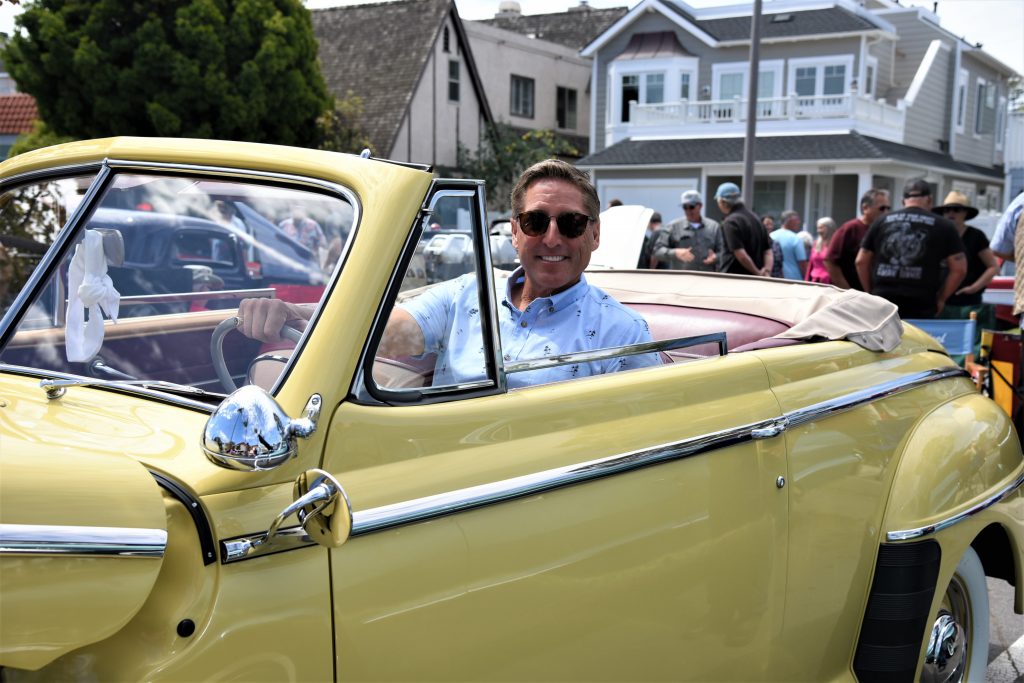 “I’m a big fan of the 1930s and ’40s because it was an iconic time in American history right after the war,” says Chuck Steel. He owns this 1948 maize yellow Ford super deluxe convertible that he found 11 years ago in Louisiana. During the six-year restoration process, they discovered lots of interesting remnants from when the car had been driven during Mardi Gras. The car is aptly named “Valentine” because its restoration was complete on Valentine’s Day. Chuck is often spotted driving “Valentine” or “Betty,” his 1936 stylish Duesenberg, around town. 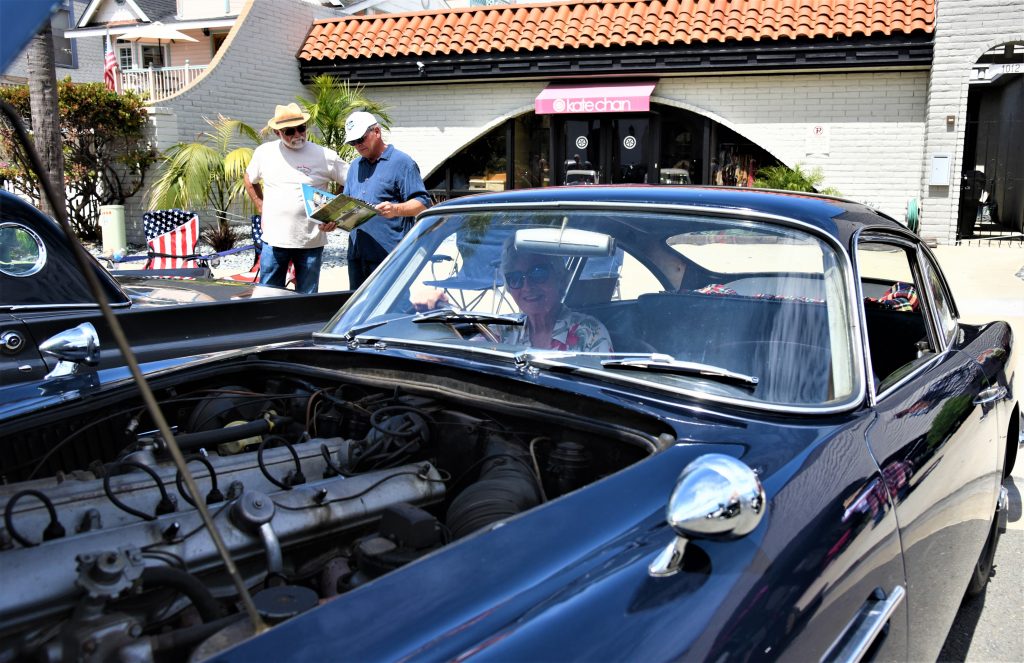 This Aston Martin DB4 James Bond car was quite a showstopper this year. It is part of the 18-car collection, 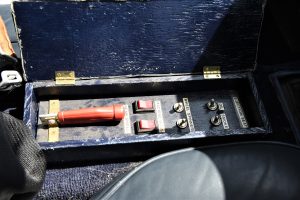 with cars from 1901 through the 1960s, owned by Sandy and Sandy Watt from Point Loma. Husband Sandy (also know as Alex) is from Scotland and has always fancied old cars, especially this era Aston Martins. Wife Sandy grew up in a car loving family and still has her mom’s T-bird that took her from kindergarten through graduate school. They also collect antique clothing as accessories for their vintage cars. 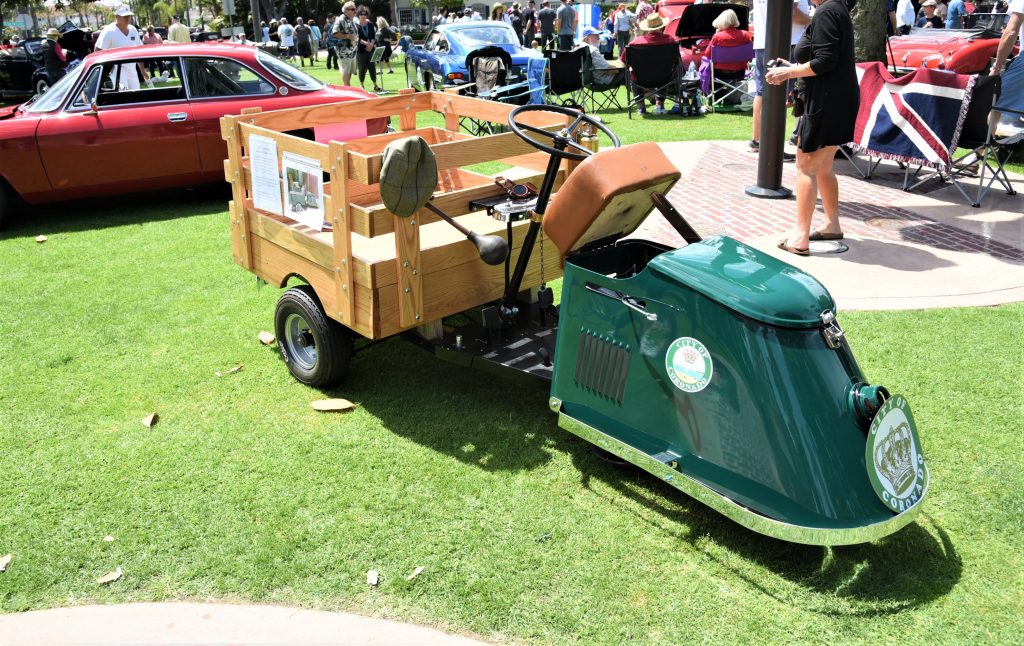 This 1950s Cushman Stakebed Package Kar was put into use by the City of Coronado Public Works Department, specifically the Water and Sewer Department. The vehicle helped to keep the Parker Pump Station, at Coronado Ave. and 8th Street, up and running back in the day. These types of vehicles have since been retired from service and this one has been sitting idle for approximately 55-60 years. The restoration project took approximately one year and has been a “ground up-100 point” restoration using 95 percent 1950 stock components. 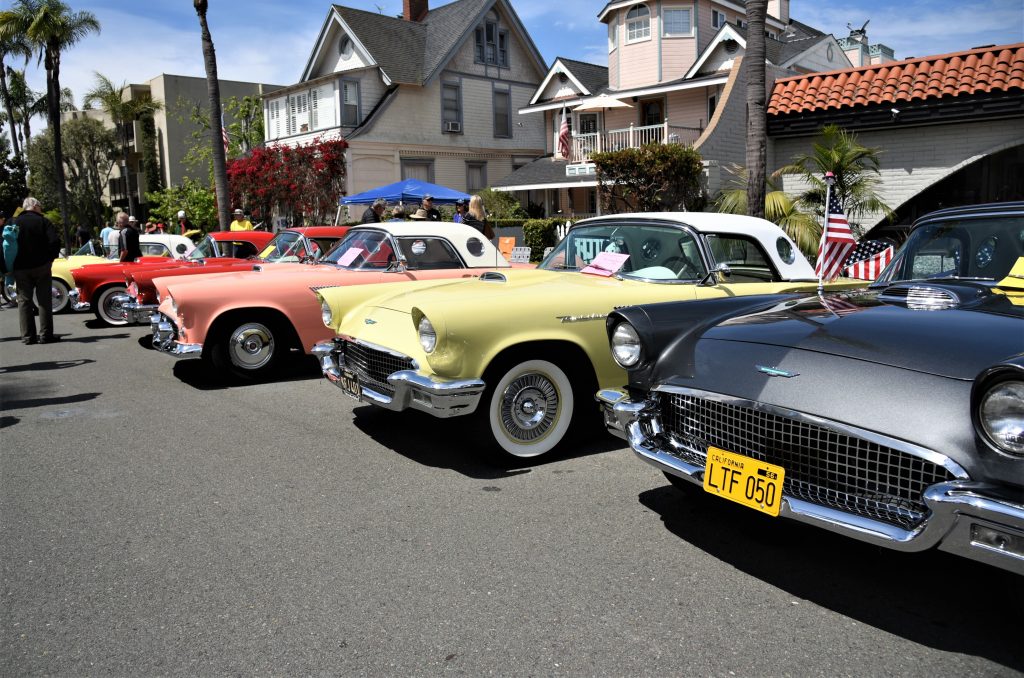 Eight shiny Ford Thunderbirds in a row were just a few of the highlights of this year’s car show which is put on by Coronado MainStreet and draws thousands of people each year.

I’m not sure any of us truly understood how much we liked dining in restaurants until we were quarantined with stay at home orders...
Read more
Community News

Our team at The Coronado Times is so very thankful for our readers, supporters, partners and advertisers. We couldn't make this publication happen without...
Read more
Community News

On June 1, Mayor Richard Bailey shared: Reflecting upon the events of this past week, I am struck by the depth of injustice that took...
Read more
People

Mike Tepper was ready for his grand opening of The Gallery & Hemp Life when the world came to a halt. The opening of...
Read more

Things are slowly moving forward for the reopening of certain businesses throughout the state and the county, and the Coronado City Council discussed what...
Read more
Business

Loans from the City Truly a Lifeline for Local Businesses

The loans given out recently by the City of Coronado to its local businesses were truly a lifeline to help them stay in business....
Read more
City of Coronado

The City Council made quick work of the agenda for Tuesday’s meeting as they unanimously approved the previous meeting's minutes and then the consent...
Read more
Business