Mayor Richard Bailey presented a proclamation to Vice Captain Lee Fulmer, VFW representative, honoring March 29, 2019 in honor of the second anniversary of the newly established National Vietnam War Veteran’s Day. The City and Naval Base Coronado will host a free lunch and tour of Naval Air Station North Island and Amphibious Base Coronado on Thursday, March 28 for Coronado Vietnam Veterans.

The most widely debated topic was the Free Summer Shuttle. Interestingly, no members of the public spoke on this matter, but several residents had sent in letters. Tom Ritter, Assistant City Manager, gave a presentation on the analysis of service to the Coronado Cays. Past options, like the Silver Strand Shuttle Service, curbside on-demand pick-up, and free MTS vouchers have all had low ridership. Councilmember Marvin Heinze suggested that they try offering the free shuttle to the Cays on weekends and offer the vouchers. Everyone agreed that the goal was to get cars off the road to be more environmentally friendly and felt that empty buses didn’t meet that objective.

After much discussion among the Council members, they unanimously approved the contract with San Diego Metropolitan Transit System (MTS) to continue to operate the Free Summer Shuttle from May 24 through September 2, 2019, at 15-minute intervals, and to operate a free bus service from the Cays Fire Station to the Community Center on the Fourth of July from 8 am to 11 pm, at 30-minute intervals, at a cost of $55,000. Heinze proposed adding free MTS vouchers, not to exceed $5,000, to be distributed by the Homeowner’s Association (HOA), and City Manager King agreed to reach out to Loews for additional hybrid options.

Cliff Maurer gave an update on the 8th Street and Coronado Avenue Manhole project citing that progress is being made. So far, 20 cubic yards of sand have been removed, and abatement, repair and dewatering has started. After excavation started, they discovered that the smaller line had been undermined so they are putting in a bypass system. They hope to have the dewatering completed next week and will then start installing shoring and replace the manhole and piping. They hope to conservatively have it done by the end of April, hopefully sooner.

City Manager King presented a Workload Capacity Report and said that they City is operating at capacity and the following is a list of some of the current projects. With their base workload, they don’t have as many resources to implement capital projects. 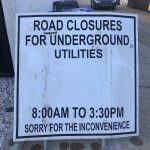 The Council unanimously adopted a resolution implementing the annual indexed adjustments to police, EMS/ambulance and development-related user fee, and to the wastewater capacity and adjustment of library services fees for fiscal year 2019-2020. For example, based on the Consumer Price Index (CPI), the ALS transport fee will increase 3.4 percent, and the Library is proposing to eliminate its single use charge for checking out DVDs.

Dave Gillingham was unanimously appointed to fill the vacancy on the Design Review Commission and serve the remainder of the current term through July 31, 2020.