Nothing prompts greater discussion and opinion than the prospect of change. Whether an outgoing or incoming business, a strategic real estate transaction, or a juicy petition on the agenda of a Planning Commission meeting — people take notice. So, when news of a multi-million dollar building project intended for a Coronado residential block made the rounds earlier this year, public interest followed. Social media buzz elicited several hundred comments from Coronado residents who were inspired to share their thoughts and concerns about the prospective changes to the neighborhood.

The proposed project inviting attention is the Logos College Complex: a two-story youth center with subterranean parking intended for 970 C Avenue at Tenth and C, across from Graham Memorial Presbyterian Church. 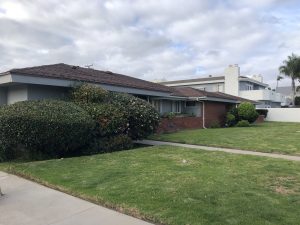 The site of the project, also addressed as 1123 10th Street, currently houses 5800 sq. ft of single level office spaces whose tenants now include the Coronado Chamber of Commerce. The property last changed hands in 2013 and was recently gifted/designated as the site for a youth center under the direction of Pastor David McElrath of Graham Memorial Presbyterian Church.

According to Pastor David McElrath, the youth center is a much-needed resource for the Coronado community, “There are currently no supervised play or afterschool ‘hangout’ areas for the young people of Coronado. I often hear middle and high schoolers say: ‘there’s nothing to do here’. Kids congregate daily at the library, but it’s not a purpose-built space to provide a range of activities or accommodate what our kids need.”

Over the past few months McElrath has faced opposition to the project, most notably in response to the petition for a zoning permit that would allow a non-residential project to be built in a residential area. Neighboring residents have voiced concern about noise, traffic and parking implications in an already congested area.

Local resident and former land use/zoning lawyer Dave Ward shared his views as follows, “Given the current housing shortage in Coronado, this seems a poor use of property zoned for residential. I would suggest at the very least that the planning commission impose a condition that the facility not be available or used for commercial purposes.”

McElrath assured there were no intentions to use the space for commercial use, adding that there would be no liquor license, and that capacity is firmly capped at a modest 340. What’s more, is that the plans for subterranean parking would create more than 20 free public parking spaces at the village location.

“I am not qualified to speak on the availability of housing in Coronado, but as a resident I have to wonder how adding nine condominiums would improve the neighborhood or do much to negate the shortage of housing. At the very least, a dozen or so more cars would be added to the existing traffic and parking problems. Our plans facilitate more public parking spaces from which everyone will benefit.”

Speculation about the Logos College project may also be a product of the landowners’ prior philanthropic real estate activities within Coronado. The land at 10th and C was purchased for $3.3M in 2013 by the TYL Foundation, based in Colorado. TYL is the family foundation of Ed McVaney who made his fortune in the software industry by founding the company JD Edwards. TYL (Thank You Lord) has deep ties to faith-based initiatives and last made waves in Coronado when the foundation facilitated transitional housing for sex-trafficking victims at the (formerly residential) Hansen Mansion on 7th and A as part of the ongoing work for nonprofit Generate Hope.

Since December of last year when news of the proposed Logos College project was made known, public comment on social media has been decidedly suspicious. The suggestion of a “creepy mega-church”, “shady business”, and “unanswered questions” have been plentiful.

Pastor David remains undeterred and addresses the naysayers with good humor, “People are often resistant to change, and this is a ‘dream-big’ project. We did our due diligence looking into commercial options that might offset the building costs, so related questions were expected. Ultimately, though, the project is exactly as we intended it to be: a space for our youth and a forum for which to purposefully share our faith and Christian values. It will be a place where all are welcome.”

Details of the plans and intended use were shared at the Feb 12th Planning Commission meeting which resulted in a favorable recommendation from the Planning Commission, specifically that the City Council approve both the Special Use Permit and the Parking Plan as presented.

Pastor McElrath is currently awaiting a spot on the Coronado City Council meeting for final approval on the project. He anticipates a total project cost of between $8-10M, and hopes to break ground within two years.

Below, Pastor McElrath speaks during the Planning Commission Meeting of February 12, 2019 beginning at the 34:30 time mark:

Patrons of the Coronado Public Library now have access to books in 68 academic and public libraries throughout California and Nevada using the library’s...
Read more
People