Bill Cecil was honored by Mayor Bailey for his 22 years of service as the Capital Projects Manager in the Public Service and Engineering Department for the City with a proclamation declaring May 15, 2018, William Cecil Day in Coronado. 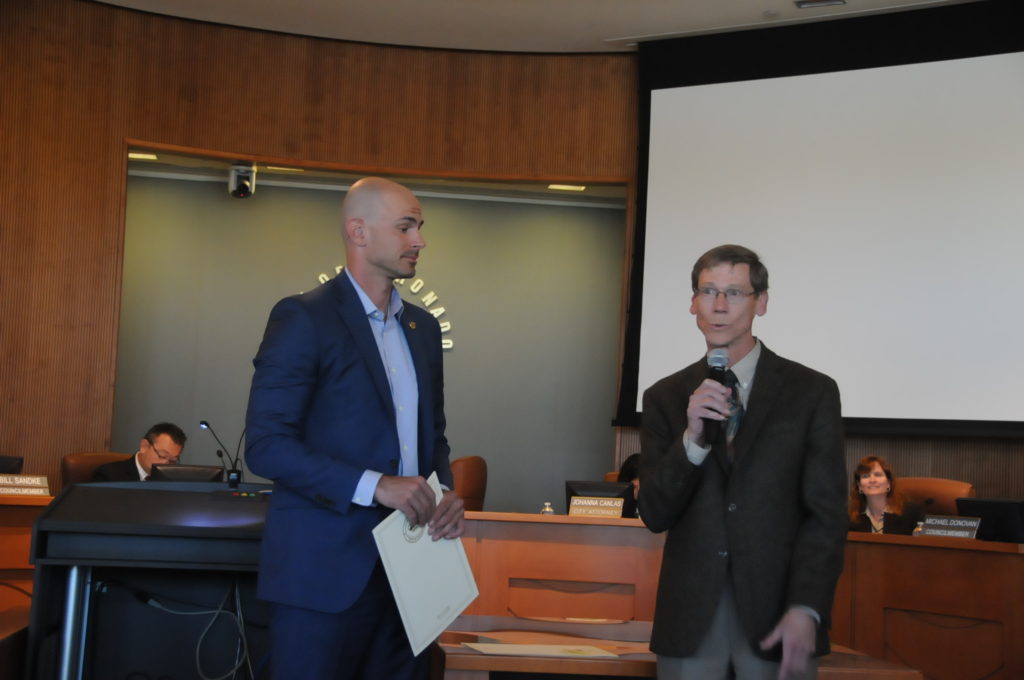 During his years of service, he has been responsible for overseeing Glorietta Masterplan, Library expansion, Marina Building, and John D. Spreckels Center, to highlight just a few of the projects he has overseen. He has gone above and beyond during his years of service, and is the only employee to have been selected twice as employee of the quarter and the year. Mayor Bailey noted that his family is looking forward to spending more time with him. Cecil thanked his wife, Rita, for listening to my “you won’t believe what we did today” stories for 22 year, and his coworkers, residents and the City Council for their support through the years.

Oral Communication started with a report from Daron Case, attorney representing Citizens Against Sewage. He noted that the International Boundary and Water Commission (IBWC) Commissioner Ed Drusina was fired by the Trump Administration. The State Attorney General and San Diego Water Control Board, and the Surfrider Foundation, have filed a 60-day notice of intent to sue the IBWC for repeated violations of the clean water act. Case pointed out that the City of Coronado has only spent $12,000 on a D.C. sewage lobby firm to fight this issue and would like to see a bigger commitment from the community for clean water.

Javier Gomez from Assemblymember Todd Gloria’s office gave an update that they are currently in the middle of budget process in Sacramento and hope Assembly and Senate will convene to pass a balanced budget by June 15. Reserves totaling $17 billion comes from an estimated $7.7 billion surplus in funds. He pointed out that Prop 98 funding was up to $127 million which proposes $100 million in new resources for each University System to address deferred maintenance. The Governor is proposing a one-time investment of $359 million to address homelessness, and $312 million for mental health care. Assemblymember Gloria is also working with the Attorney General to get the state to take action against the IBWC.

Blair King gave a brief City Manager’s report mentioning that it was National Public Works Week and pointing out the new Beach Groomer that the city recently acquired. He also introduced the new Community Development Director Rich Grunow, who started earlier this month. He invited the public to attend the first State of the City Address on May 24, at 6:30 pm, at the Coronado High School Performing Arts Center.

Garry Bonelli, Coronado Port Commissioner noted that May is National Maritime Month. The Port of San Diego is offering free bus and boat tours. The boat tours are scheduled for Saturday, May 19 and Sunday, May 20. It’s a great way to see the 34 miles of bay and Port Tidelands, and learn about how the Port works with its five neighboring cities. For more information on these events, check out https://www.portofsandiego.org/maritimemonth.

The Navy and Port are working together on climate change and sea level rise and have created a memorandum of agreement that will continue to move this discussion forward.

Bonelli noted that there are four public places to launch boats, including National City, Chula Vista, Glorietta Bay and Shelter Island. The Shelter Island ramp is currently under renovation, but underwater obstacles such as giant concrete debris have been encountered, which will delay the completion of the project until the end of September. This will impact boat launching traffic at the Glorietta Bay ramp and other public ramps. When Councilmember Downey asked about the impact on the Glorietta Bay ramp, Bonelli noted that Chula Vista and National City are better suited to launch larger boats.

There is a need to better maintain the fencing and landscaping surrounding the dry boat storage area on Grand Caribe Island. Bonelli indicated that the tenant needs to invest in the leasehold to make it more like a park setting.

“I thought we could have a new Coronado Yacht Club (CYC) done within a year, but five years later, the CYC leadership submitted a plan to Coastal Commission who still want a 150 yard right-of-way on the water side of the existing club building. Hopefully in the next 90 days, the Port of San Diego will be able to provide CYC with another five-year lease extension to see what can be done with the club’s redevelopment proposal in the interim,” says Bonelli.

He reported that the Port Master Plan, which lays out the primary, secondary and overlay around the bay should be drafted to be submitted to the Coastal Commission by the end of 2018, and then the approval process takes approximately one year, so he anticipate that by end of calendar year 2019, it will be approved.

The new $45 million dollar concert shell at the Embarcadero will be completed soon.  “Residents will be able to see more events, but whether Twisted Sister or Barbara Streisand is playing, the music will travel down the bay rather than across the bay,” commented Bonelli.

Mayor Bailey asked City Manager Blair King to give background on 92118 Day. He noted that back in October, the Council approved a one-time major special event for September 21, 2018, aka 92118 Day. The requested financial assistance is in-kind contributions from City Police, Fire and Public Services and approximately $60,000 in funding, which was approved unanimously by the City Council.

Since there is no event organization, the city will pay the vendors and expenses directly.  The citizen committee members include Steve Johnson, Alisa Kerr and Rob Crenshaw, who are working to secure volunteers and donations for the day of the event and clean-up the next day. Steve Johnson came up with this idea and said the intent is to create a Coronado celebration at Central Beach for residents to get together, eat, and listen to music with community bands and vendors, and play games from 3 p.m. to 9 p.m.  Ocean Blvd. and several surrounding streets will be closed for the event.  More information can be found at www.92118Day.com.

Associate Planner and Staff Liaison for the Historic Resource Commission, Tricia Olsen, presented a historic alteration permit for zoning standards for the rear yard setback variance for 749 J Avenue. Architect Brittany Teeter answered questions from Councilmembers. There were no comments from the public and the request passed unanimously.

The final and most discussed agenda item was the 41 Ocean Court De novo Hearing, for which Councilmember Benzian recused himself. Two neighbors spoke up in support of the Planning Commission’s ruling of denying the Accessory Dwelling Unit (ADU) permit. Jesse Brown, senior planner, presented the background on the project. The issues considered were the allowable size of the ADU by the State versus the Coronado Municipal Code, and the date of the application of this project. Staff determined the ADU in this case is 123 percent larger than the main dwelling, which is more than the allowed 50 percent. Staff recommended that the City Council deny the appeal. Zach Todaro, appellate on behalf of the Todaro Family Trust then presented his case. After much discussion, the City Council upheld the Planning Commission’s ruling.