Teachers, Guns and the Law 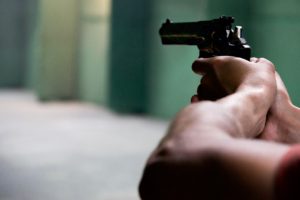 Teachers and guns are not two words that we typically find in a sentence together. But, a recent google search pulled up over 10 million results in just about half a second. The two have been linked in national news in recent days because of President Donald Trump’s call to arm teachers as a security measure in the wake of the Parkland, Florida high school murders on February 14. And, the linked words have reached Coronado through a Channel 10 news broadcast in which a Coronado Middle School teacher was asked to comment on the idea of arming teachers. She said: “My student’s safety is my number one priority… It’s a good idea because…I can’t protect all thirty of my students with erasers, pencils, and rulers.”

This broadcast brought up a number of questions. First, did this teacher express a consensus view among Coronado teachers? Second, can teachers who have concealed-carry permits now carry weapons on campuses?

On the first question, it would appear that there is little consensus among teachers in Coronado on carrying guns. Certainly, alternative opinions to the one in the newscast have been expressed – on social media and over conversation. The concerns are many including the idea that teachers already have so much on their plates, is it appropriate to ask them to also serve as armed security? If teachers were armed, would they carry a loaded weapon on their person or would it be stowed? If stowed, how quickly could a teacher react in a crisis? If on their person, how safe would that be in a classroom environment?

One former teacher said that she had been overpowered by a student once, who pushed her down and stomped on her back. She felt that if she had had a gun, he would have overpowered her and taken the weapon. Highly trained military and former service members also argued that the level of training necessary to respond appropriately in an active shooter situation was just unlikely to be attainable for a full-time teacher.

However, when asked to go on the record as having spoken to us about their opinions, Coronado teachers, who had at first agreed, later declined. When asked if teachers had been asked not to express their personal views on the topic, Coronado Unified School District (CUSD) Superintendent Mueller said, “Teachers were not asked to repress their views publicly. CUSD staff are entitled to their First (and Second) Amendment Rights – however, there are laws and Education Code that govern staff actions and permissible behaviors while serving in their capacity for CUSD.”

Mueller went on to add that, “The public statements made by the teacher [in the Channel 10 newscast] represent her own personal views.”

On the second question, California state laws are generally quite restrictive on guns in school zones (aside from when it is related to the job of the person carrying – e.g., a security officer). However, if one has a concealed-carry permit, they are allowed to have a weapon in the school zone if properly secured within a vehicle.

When asked whether the CUSD is drafting a stance on arming teachers or has a position now, Mueller said, “Our stance is that the district will follow the law.”

Given the current restrictive laws and the National Education Association arguing against arming teachers, it seems unlikely that the district will have to seriously consider implementing such a measure.