There are two Boy Scout troops and nine Cub Scout dens in Coronado, with a total of close to 200 boys; and now one of those Cub Scout dens is comprised of four girls. Even though girls have always been allowed at scout activities, now they are able to participate, wear the uniform, earn the badges and move up in achievement.

In October 2017, a national announcement was made by Boy Scouts of America about the decision to include girls. A deep dive into the decision is explained here by Patrick Sterrett, Assistant Chief Scout Executive and National Director of Field Service.

Cub Master Erin Grady Brown shared with me that the San Diego-Imperial Council decided to participate as an early adopter of the program, and Pack 122 of Coronado was given the opportunity to be one of the first to enroll girls. Because Boy Scouts of America packs must have a charter organization, that meant the Optimist Club of Coronado had to give the go-ahead; which they did. Troops across the nation will not be required to allow girls. It will be by choice between the packs and their charter organization partners. 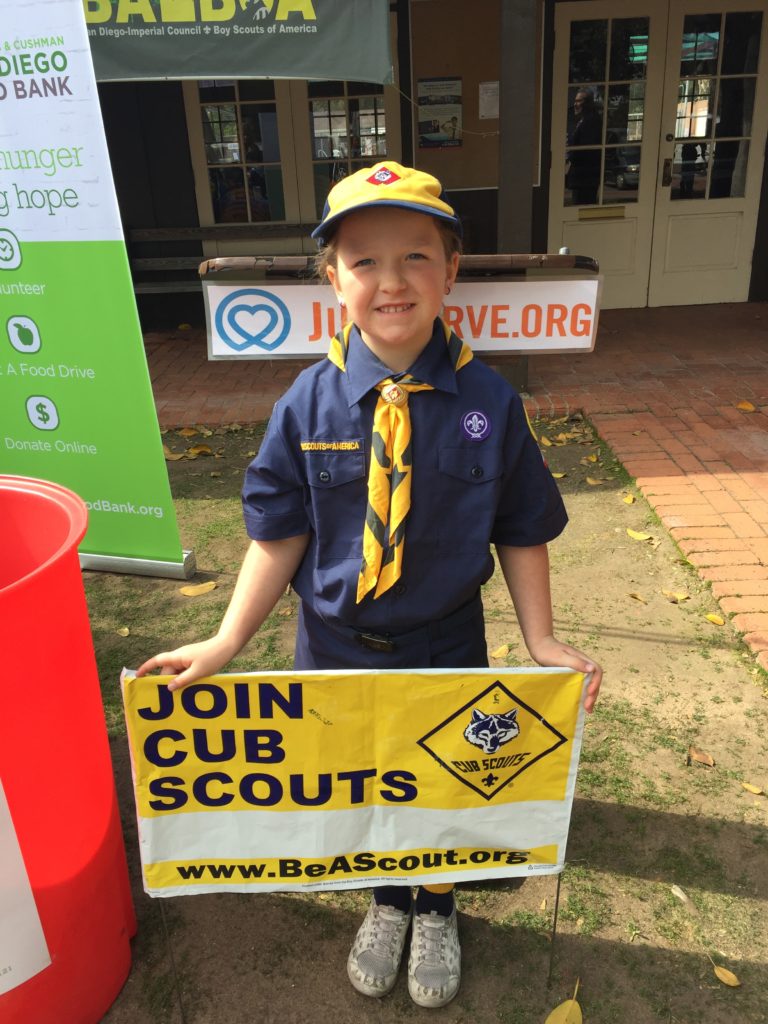 Enrollment for girls opened in January 2018 and will go through March 15, 2018, for this year. There is still time, although there will be a lot packed in to complete the year’s activities to earn the badges of the level one enrolls in, since the scouts’ year goes from September to May.

When asked if there had been any backlash from Girl Scout leaders in Coronado or Girl Scouts of America, the answer was, “none as of yet.” Two of the girls in Cub Scouts are also in Girl Scouts, both who have older brothers who are in Cub or Boy Scouts. The test program allows for girls grades K-5 to enroll as there are different levels of Cubs. The older girls program is still under development and is expected to be ready for enrollment later in 2018 or 2019.

Mother and Den Leader, D.D. Hutto, leads the girls currently enrolled, which includes her 7-year-old daughter. Hutto explained that with an older brother in cub scouts and the family camping trips, her daughter Laura was all about becoming a cub scout instead of going the route of Girl Scouts. It was a better fit for their family. Because Cub Scouts are usually grouped in dens by age/grade it is a bit unusual to have three second graders, Wolves, and one first grader, a Tiger, in the same den. Because of that, Leader Hutto has to run two levels simultaneously and coordinate activities for both groups until the official enrollment this August where the hope is there will be more girls to separate the ages. There are co-ed activities, just as there always has been with family scouting, but the dens will be kept separate.

The Boy Scouts of America curriculum was completely reworked and rewritten in 2015 to become modernized and realistic to today’s standards. The only new changes to the curriculum will be the language on documentation so that it is non-gender specific. The boys and girls will work side by side and have the same requirements to meet.

Cub Master Erin Grady Brown is a lifelong resident of Coronado and has two sons in Scouts. They were encouraged by their paternal grandfather to join scouts when Brown became a single mother raising boys. When the conversation of girls becoming part of scouts came up, she didn’t know what to expect from grandpa who is a retired Marine Colonial. To her delight and surprise, his reaction was positive with an explanation that in the Marines we all worked together and that’s the way it should be. As with any change, not everyone is as enthusiastic.

County COVID-19 Cases Reach 603 Through March 30, a total of 603 COVID-19 cases have been reported in San Diego County, including 84 new cases...
Read more
City of Coronado

Submitted by Anne Boston ParishLemons are simply amazing. Not only do they have a bright and fresh scent, but there are simply so many...
Read more