Very few people know what it’s like to be a Naval Aviator, flying the most technologically advanced tactical aircraft in the world, into harm’s way, from the flight deck of an aircraft carrier. Coronado resident, and former Navy Fighter Pilot, Vincent Aiello wants to change that with his new podcast that he says will “explain the fascinating world of air combat (the airplanes, the weapons systems, and—most importantly, the people) to the general public.”  He will describe flying combat missions over dangerous territory, explain what it feels like to pull g’s (g-force, i.e. gravitational force), and the thrill and fear that goes into launching and landing off an aircraft carrier’s floating runway that is just 795 feet long. [To put it in perspective, San Diego International’s Lindbergh field is more than 10 times that length at 9,401 feet long]. 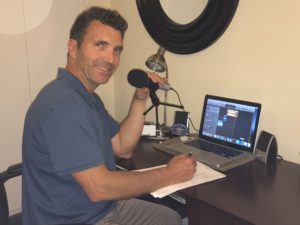 After serving more than 24 years in the Navy, Vincent retired in January 2017 and began a second career flying for Delta Airlines. In an effort to stay connected with the Naval Aviation community and share his love of aviation with the public, Vincent started his Fighter Pilot Podcast on January 1, 2018 and has already earned a following of appreciative listeners who want to hear more about what it is like to be a fighter pilot.

Vincent grew up in Arroyo Grande, Calif. and fell in love with aviation when his step-father brought him to airshows in the late ’70s. “As kids, my two older brothers and I tinkered with remote control airplanes because we were fascinated with anything that flew. In high school, with my step-father’s prompting, I made up my mind that I wanted to become a Navy fighter pilot. By the grace of God and as the result of a lot of hard work, I did just that,” shared Vincent, who went on to earn his Bachelor of Science degree in Applied Mathematics from UCLA in 1992.

Just as Vincent fell in love with Naval Aviation, he and his wife also fell in love with Coronado. When Vincent’s brother was married in Coronado Centennial Park in 1996, he and his then girlfriend (and now wife) knew Coronado is where they wanted to live. Vincent said, “It was not until 2010 that a military job became available that allowed us to live here. We moved away briefly in 2013 but returned in 2015 for my twilight tour at the Fleet Readiness Center Southwest on North Island. Upon retiring from the Navy in early 2017, my family unanimously decided we wanted to remain here and call Coronado home. We love the small-town, patriotic community and the people who also call Coronado home. We love the schools, the climate, the beaches, and the ability to easily get around town on a bicycle.”

Vincent was stationed in Point Loma in 2010 while living in Coronado; it was during his commute that he gained an appreciation for listening to podcasts. He has wanted to start his own podcast ever since, and upon retirement from the military the opportunity presented itself.

When I asked Vincent how the podcast is going so far, he responded with, “The response to the show in just the first month since launching has been phenomenal. I have had people reach out from all over the world, thanking me for starting the show and excited to hear the next subject. I even had a high school student write to tell me that he is an aspiring fighter pilot who wants to someday lead the life my guests and I describe on the show. He is glad to have a little extra information and insight on the subject and reports my show has stoked the fire that drives him. This kid is me 30 years ago. If I can help just one person, like him, then this whole effort—which has been an enjoyable one anyway—will have been worthwhile.”

Vincent has posted three podcasts with topics covering callsigns, flight clothing and equipment, and his introductory podcast released Jan. 1 titled “What is a ‘Fighter Pilot’?”. For those interested in hearing stories about what it takes to be a fighter pilot, and what it feels like to fly the Navy’s advanced fighter jets, download his latest podcast at: https://fighterpilotpodcast.com/.  If you have questions or ideas for topics to be covered you can email Vincent at [email protected].

Jeannie Groeneveld
Jeannie is a recently retired Naval Officer whose first duty station brought her to Coronado in 1998.  A Navy Helicopter Pilot for 10 years and a Public Affairs Officer for 11 years, the Navy afforded her many incredible opportunities to serve her country in unique ways while seeing the world.Have news to share? Send tips, story ideas or letters to the editor to: [email protected]