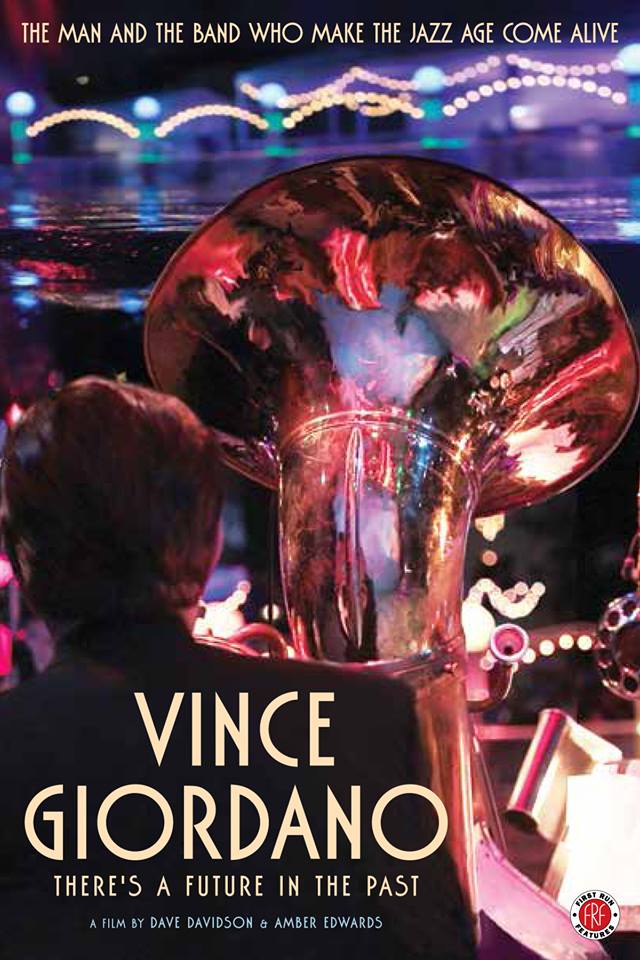 Vince Giordano – the main subject of the documentary film, Vince Giordano: There’s a Future in the Past, which will be shown at the Coronado Island Film Festival – was born in 1952 in Brooklyn, NY. While the location might seem right, when you listen to his music, the date will seem wrong. Giordano doesn’t so much live in the past as he lives and breathes it in and plays it back out to us as the original Big Band sound.

Giordano first got interested in big band jazz when he found his grandparent’s old Victrola and records. He says that the music of his era – the 50s – just seemed too “saccharine” and “silly.” He felt “uneasy” with it. But, listening to some of his grandmother’s old jazz records, he found a music he could love. Giordano recounts in the film, “Just the sound that was coming out of that old machine, it just hit me. I said, ‘this is my music.’” Since that time, it seems that he has always kept his eyes focused on the past.

Giordano almost seemed to systematically ensure that he didn’t become a one-trick pony. After listening to the music, and learning to play multiple instruments – initially, string bass and bass saxophone – he also set out to learn about writing arrangements as well as performing. Along the way, Giordano also became a collector of sheet music and musical arrangements of the period and he naturally ended up becoming a historian of music of the era as well.

The film takes us through the ups and downs that come along with having an extremely accomplished professional life. Giordano is a Grammy-award winning musician who has worked on films with Woody Allen and on the HBO series Boardwalk Empire, performed as a regular on NPR’s Prairie Home Companion, in addition to playing in various New York clubs and appearing in numerous movies. Nonetheless, times are not always bright for him or his band, The Nighthawks. The film opens when Giordano and his band have a regular two-day per week gig at Sofia’s in the Edison Hotel in New York along with other more regular engagements. But, by the time the movie ends, Sofia’s has closed and the band needs to find a new home.

The opening scene of the documentary shows us (if we didn’t know already) why it’s called Big Band jazz. In that scene, Giordano is loading many instruments into a van. In his heyday, in the 1980s, Vince says that he ran three 11 piece bands per night at times. That meant “three sets of books, three sets of music stands … two vehicles.” Even in the slow times that followed, Vince would take some 2500 arrangements to each gig – the variety and surprise in the music kept the band members fresh.

Throughout the film, we see the success of the band. We see them play at Sofia’s, the Newport Jazz Festival and The Lincoln Center’s Midsummer Night Swing, to name a few events. And, the band was able to keep going through the 1980s as a “society band” that played events, weddings, etc. nearly every night of the week.

We also see the difficulties of Giordano booking his own gigs and keeping so many musicians employed. Excellent musicians grow old and don’t want to play anymore, or they sub out their spots for to someone so they can take another gig that pays more. Over the years, the frustrations at times become too much, and so we hear about the multiple times Giordano has shut down the band and quit over the course of the more than 30-year lifespan of The Nighthawks.

It is clear that Giordano is the lynchpin holding the whole thing together. He manages the band and its engagements, performs as the band leader as well as a musician and is, to a large extent, his own road crew. The other musicians interviewed attest to this – they talk about the amazing experience of playing together and the importance of having Giordano as the band leader. One says that he will likely never again play with such a talented group.

This is the key thing both Giordano and Amber Edwards, one of the two film-makers, point out about success in the music business – it isn’t all about music, it is also about business. Giordano has the skill and discipline to be a logician and business-person as well as a musician. Edwards suggested that perhaps this combination of skills grew out of Giordano’s time with the Navy Show Band. Wherever it came from, this particular combination seems critical to his success.

So I began thinking about what one would worry about if Giordano were in the corporate world – what is his succession plan? Few, if any, current musicians will likely be able to replace him. This makes viewing the film something of a necessity for those who love this music. Despite the subtitle of the film – There’s a Future in the Past – seeing this documentary might be one of the last times that you have a chance to see Big Band Jazz done so well. And, actually seeing it is important. As one jazz lover in the film tells us, it is important to see, not just hear: “Vince is the experience that you would have heard if you had been lucky enough to have been alive to go hear this music live at its inception. You hear that aspect [the musicians standing, sitting, clapping, dancing, using mutes, etc.] that is missing in the recordings.”

If you love Big Band jazz, see the film. It has plenty of music and it’ll make you want to get up along with The Nighthawks and “shake that thing.”

The film will show at 7pm and 10 pm on November 11, at the Village Theatre as part of the Coronado Island Film Festival. Both Edwards and Giordano will be in Coronado for the festival. There is even a rumor that there will be a bit of a performance on Friday evening at the Celebrity Tribute at the Del.

Whitney Benzian will not be running for reelection on the Coronado City Council, describing the difficult decision he has been thinking about for a...
Read more
Business

UPDATE July 28, 2020 - The Planning Commission today denied the request for a Major Special Use Permit that would have set in motion...
Read more