Mayor Richard Bailey stood in front of rows of crosses planted in the grass outside the Coronado Library’s Winn Room. Each cross represented one of the 400 people who have committed suicide by leaping off the San Diego-Coronado bridge since it opened in 1969. The number per year has been rising and is expected to rise more. There have been 16 suicides this year already. There were 17 last year. The loss of life and related bridge closings have taken their toll.

“It’s time. It’s time for a solution,” Bailey said. Some 50 people had gathered to listen to the Mayor and others talk about the toll bridge suicides have had on individuals and on the community. 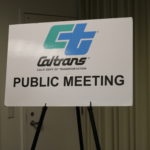 The rally was held ahead of a California Department of Transportation (Caltrans) open house on suicide deterrents. This was the second such event the agency held. The first was held the previous night, on August 9, in Barrio Logan. Both the Barrio Logan and the Coronado communities are touched by the bridge and have experienced bridge related tragedies. 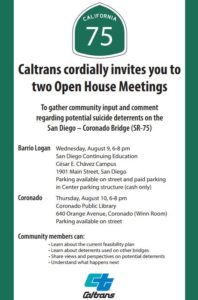 The turnout for the two open house events was dramatically different. Between 30 and 40 people attended the Barrio Logan event, while over 150 came to the one held in Coronado, according to Hayden Manning, a spokesperson for Caltrans, who attended both meetings.

The attendance may well reflect difference in community awareness. Whenever there is a potential jumper, whenever there is an accident, it greatly affects traffic getting on and off the island, inconveniencing and frustrating residents and those that work in Coronado.

An even bigger factor may be the Bridge Collaborate for Suicide Prevention. The group has kept the issue alive and lobbied hard for something to be done, and played a key role in getting Caltrans to undertake a feasibility study.

For the meetings, Caltrans set up posters around the room displaying various statistics and information. Some showed ways to deter suicides: a grid/mesh barrier on the Cold Spring Canyon Bridge in Santa Barbara, a covered glass panel barrier on the Grafton Bridge in Auckland, New Zealand and a net that will soon be added to the Golden Gate Bridge. All three bridges had, or have, reputations as suicide bridges. These are not the only options. “We want to hear what the residents want,” said Lori Berman, Director of Caltrans in District 11.

One fear expressed by many people at the workshop was that once the Golden Gate Bridge has a net to catch people, the San Diego-Coronado Bridge will eclipse it as the state’s leading suicide bridge.

Residents and public officials want to take steps now to prevent that from happening. “The bridge is already attracting people from outside who are determined to end their lives,” said Captain Jim Nellis of the California Highway Patrol. He also said that he has seen a steady increase in the number of suicide related calls in the past few years.

When a potential jumper is spotted, the CHP responds and a team of suicide interventionists are deployed. They have “a high success rate in talking potential suicides down,” Nellis said. The process can take hours. Commuters are inconvenienced. Their lives disrupted.

He said that he understood people’s frustrations. But he asked drivers to be “patient, understanding and compassionate. These people are in despair and need our help.”

The feasibility study is expected to be completed next spring. Before construction of any deterrent, there are a number of steps that have to be followed, including an environmental review and finding someone to design and to build the project. The agency will also have to obtain funding from the State Legislator. State Senator Ben Hueso is already onboard. Last year he sponsored a bill to fund the feasibility study. It was dropped when Caltrans discovered that it already had money in its budget to complete the feasibility study. 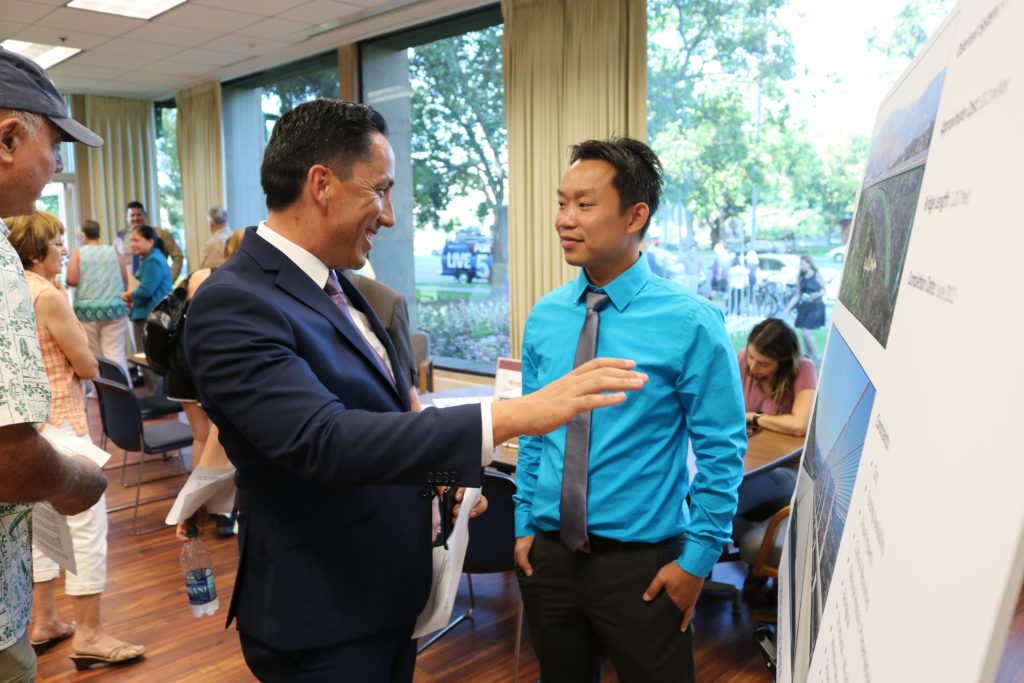 Assemblyman Todd Gloria, who attended the workshop, also pledged his support. “This is part of a larger mental health crisis,” he said. He views stopping bridge suicide as an important step in addressing the problem.

Still, for small communities state funds are not easy to secure. That is why Bailey is drafting a letter asking mayors throughout the region to support Coronado in its efforts.

“These [suicides] not only affect Coronado, but the entire region,” Bailey said.