Many thanks to Daron Case for this detailed update on the ocean water contamination this past week. 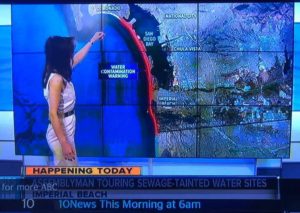 Last week, ABC News 10 reported the beaches from the international border up to the edge of the Hotel Del were closed due to water contamination. By Friday afternoon, just before lifeguards ended their shifts, they removed the contamination signs from Imperial Beach in front of the Pier South Resort, Silver Strand in front of the Loews Coronado Bay Resort, and all Coronado beaches… this just in advance of the Mother’s Day holiday weekend. Many residents in IB and Coronado were asking questions.

Keith Kezer from the San Diego County Department of Environmental Health (DEH) contacted Daron in response to Daron’s recent email inquiry. Keith was helpful and did his best to answer all of the questions. Below is a summary of what was discussed.

QUESTION: Where and how often does DEH take water samples in IB and Coronado?

ANSWER: Through the “summer season” (which he described as from April to October), the DEH only does one routine test per week which is at the IB pier. During the winter season, DEH has two routine tests per week at 7 locations – South Seacoast, Cortez, IB Pier, Carnation, and three locations along the Strand – entrance to park, lifeguard tower, and north end of RV campground. However, the City of San Diego (wastewater division) also tests multiple locations per week year round, and DEH relies on City testing as well. When there are “exceedances” (i.e., when testing reveals that acceptable limits have been exceeded, or after rains or when there are reports of contamination), testing is more frequent until the levels are clear.

QUESTION: How long does it take for DEH to get lab results back after taking the water samples?

ANSWER: DEH has two types of testing (entero alert and multiple tube fermentation). Entero alert gets a response within 24 hours. Multiple tube fermentation can take 48-96 hours for results. For both types of tests, “preliminary” results can come back as soon as 18 hours. The City of San Diego wastewater uses “membrane filtration” testing which takes 24 hours, but they can also have preliminary results back as soon as 18 hours. “Preliminary” results happen when bacteria levels rise to levels that indicate an exceedance before the full culture incubation/fermentation period.

QUESTION: What exactly is DEH testing for?

ANSWER: All testing for DEH and City of San Diego is for the same three things: enterococcus, total coliform, and fecal coliform, which are “indicator bacteria and pathogens.”

QUESTION: Who directly gives the lifeguards the order to post and/or remove the contamination signs?

QUESTION: Does the DEH test the beach sand as well as the water? If there are harmful pathogens and bacteria in the ocean water, wouldn’t they also be in the beach sand? Could the sand be contaminated longer than the water?

ANSWER: DEH and the City of San Diego do not test beach sand. While bacteria/pathogens may exist on the beach sand, they should not last longer in sand than water, so when the water is deemed clear, the sand should be clear as well. Since all results are a day behind (due to minimum 18 hours for preliminary results), then by the time the water is deemed safe, the sand should be safe as well. But while contamination signs are up, the beach sand that has come in contact with the contaminated water may also present some health risks.

QUESTION: Does the DEH have any influences for water testing from any staff or elected officials from the cities of IB or Coronado? For instance, does DEH get “pressure” from any source to test more often sometimes, such as in advance of a holiday weekend? If so, who, exactly, is applying such pressure to test?

CONCLUSION: After speaking with Mr. Kezer, I understand what happened last Friday when ABC News 10 reported beaches closed up to the Del in the morning, then the beaches were opened by DEH the same afternoon. Kezer explained the beaches were actually deemed closed on Thursday up to Avenida Lunar in Coronado… that was based on test results from Wednesday. Then further testing was done on Thursday that led to the clearance of beaches on Friday. The DEH and City of San Diego are always at least a day behind in their testing. This does present some concerns, as whenever you see beach closure signs go up, that means the beaches were contaminated the day before… I have surfed many times the day before contamination signs have gone up… that means I was surfing in contaminated water. I think there are many ways “the system” can be improved – e.g., it would be helpful to have more frequent and more comprehensive testing… and if possible it would be ideal to get quicker response times than the minimum of 18 hours for “preliminary results,” as this obviously presents a lot of problems with folks swimming in contaminated water before test results have come back and contamination signs are posted.

Thank you Daron Case for your diligent research.

A Special City Council meeting has been posted for Tuesday, March 31, at City Hall at 4 p.m. On the agenda is a consideration...
Read more
City of Coronado

Check out this short video preview of the City Manager's Weekly Update hosted by Blair King to see what the City is doing to...
Read more
City of Coronado

The City is evaluating the impact of the closure of City of San Diego beach parking lots and the recently announced change of direction...
Read more
City of Coronado

https://www.youtube.com/watch?v=hiGCbC7_k6oCheck out this special edition of the City Manager's Weekly Update video hosted by Blair King to see what the City is doing to...
Read more
City of Coronado

It was understandably a minuscule crowd at the Coronado City Council meeting this week with extra space between chairs. The city has postponed all...
Read more

Submitted by Anne Boston ParishLemons are simply amazing. Not only do they have a bright and fresh scent, but there are simply so many...
Read more
Business

Main Street America is asking small business owners to participate in a survey about the challenges they’re facing as a result of the COVID-19...
Read more
Education

Letter from CUSD Governing Board

Dear Stakeholders and Constituents,First and most important, the CUSD Governing Board of Trustees hopes that you and your families are well and adjusting to...
Read more
Community News

As of 1:23pm the bridge is open in both directions.At 9:47am Coronado Police Department sent out a Nixle alert that both the eastbound and...
Read more
Letters to the Editor