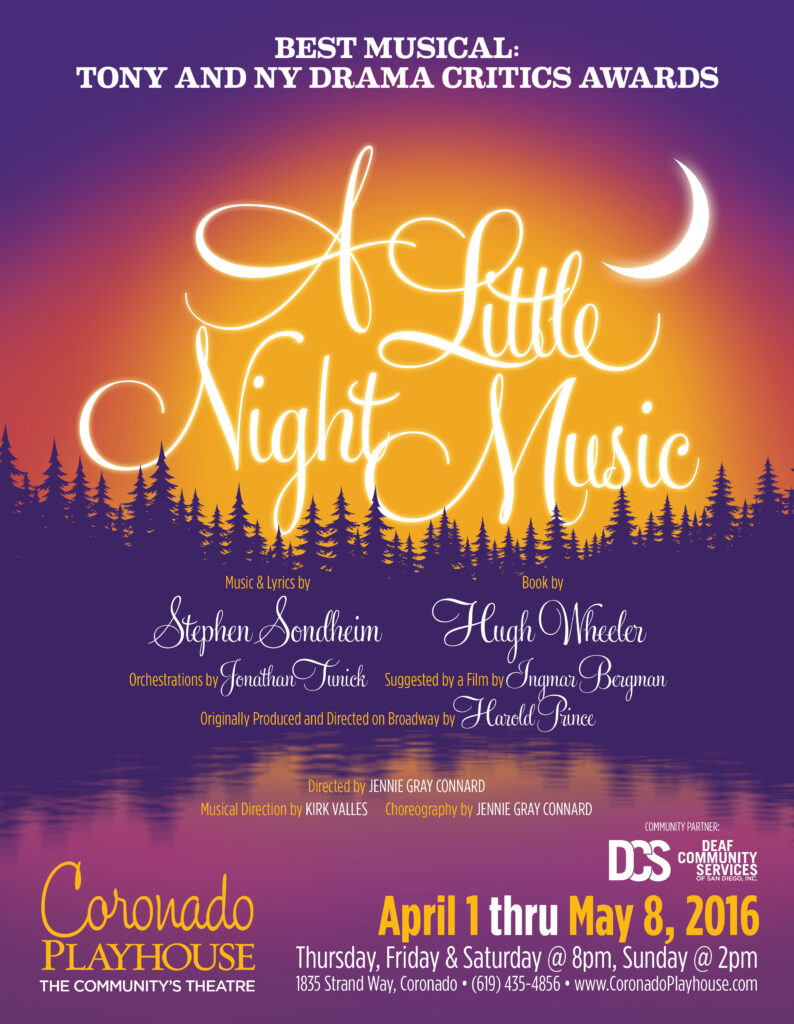 From April 1 to May 8, the Coronado Playhouse presents a Tony Award-winning musical called A Little Night Music. The musical is set in 1950s America and tells the story of renowned actress Desiree Armfeldt and the men who love her. The men — and their jealous wives — agree to join the actress and her family for a weekend in the country. With everyone in one place, infinite possibilities of new romances and second chances bring endless surprises.

My husband and I attended the play on opening night, when the audience was full of long-time Coronado Playhouse supporters and the actors’ friends and family. The atmosphere in the room felt charged with excitement, and applause and laughter were enthusiastic. We loved being a part of such a supportive and engaged audience; it made the Coronado Playhouse truly feel like a local, family theater — which it is!

“We’re all like family here,” M.J. Perez, Media Coordinator for the Playhouse, said as we left. “We’re so glad you could join us tonight — come back again!”

Even though my husband and I enjoyed the environment of the playhouse, we ultimately didn’t enjoy the play itself. The music and lyrics are by Stephen Sondheim, who also wrote the lyrics for famous musicals like West Side Story and Sweeney Todd. His stye is somewhat more edgy than a traditional musical style, the music felt discordant and incohesive, despite the excellent 12-piece orchestra playing in the set on stage. Viewers familiar with the songs or with Sondheim, however, may not agree with me; I regret that I was not more familiar with the music.

The story, though, also fell short. Ultimately, it is a sad theme: a famous actress wrecks havoc on marriages by having a series of affairs with men, and the indiscretions of the adults cause confusion and loneliness for their children. While it is all just theater, the witty dialogue and dramatic endings don’t cover up the fact that the plot is based around a series of infidelities. The ending does offer some resolution, but only because marriage and loyalty were ultimately secondary to the characters’ current love interests.

The actors all threw their hearts into the production, and their enjoyment at being on the stage together was palpable to their audience. Debbie David, who played Desiree Armfeldt, deserves special recognition for her magnificent rendition of “Send In the Clowns,” the most famous song in the play. For me, Debbie David and Barron Henzel’s reprise of the song was the highlight of the evening, a tender and breathtaking conclusion to the story.

A Little Night Music plays every Thursday-Saturday night at 8pm and Sundays at 2pm, now through May 8. Tickets are available online or by calling the box office at (619) 435-4856.