Historical Association Gala Honors the Navy and the Stockdales

Senator John McCain celebrates the Navy and Coronado in this very special video.

On Sunday, March 19, the Coronado Historical Association (CHA) held their annual Gala.  This years’ Gala celebrated “Coronado and the Navy – A Story for the Ages.”  The event included a special tribute to Sybil Stockdale, activist and wife of Rear Vice-Admiral James Stockdale. The biggest announcement of the evening was when philanthropist Don Budinger announced that he was donating to the Coronado Historical Association, the building in which it now resides: 1100 Orange Avenue. The gala was held at the Coronado Island Marriott Resort.

The most special guests, of course, were Sid and Taylor Stockdale and their wives, Nancy and Anne respectively.

Taylor Stockdale enthused about the evening: “Sid, Nancy, Anne and I were overwhelmed with the beautiful tribute to our mother last night.  The video featuring John McCain was beautifully done, and it was so wonderful to see our long-time Coronado friends. Sybil Stockdale was there in spirit and she was loving every minute of it! Thank you one and all.”

The evening opened with a festive cocktail reception in the foyer where champagne flutes and hors d’oeuvres were passed. During the reception the guests could peruse the Silent Auction items that included offerings big and small: a bicycle from Holland’s Bicycles, wines, paintings, and various gift baskets.

After the reception, dinner was served in the ballroom. Twenty-four tables decorated in red, white, and blue, with hydrangea floral centerpieces, greeted the guests as they moved from the foyer into the ballroom.  After people settled in their places, Coronado High School Navy Junior ROTC movingly presented the color guard and Angela Ahern majestically sang our National Anthem.

Anne Stockdale remarked that it was “a magnificent event, the dinner was delicious and the volunteers did an amazing job! It was a special night with a lot of wonderful people in attendance.” 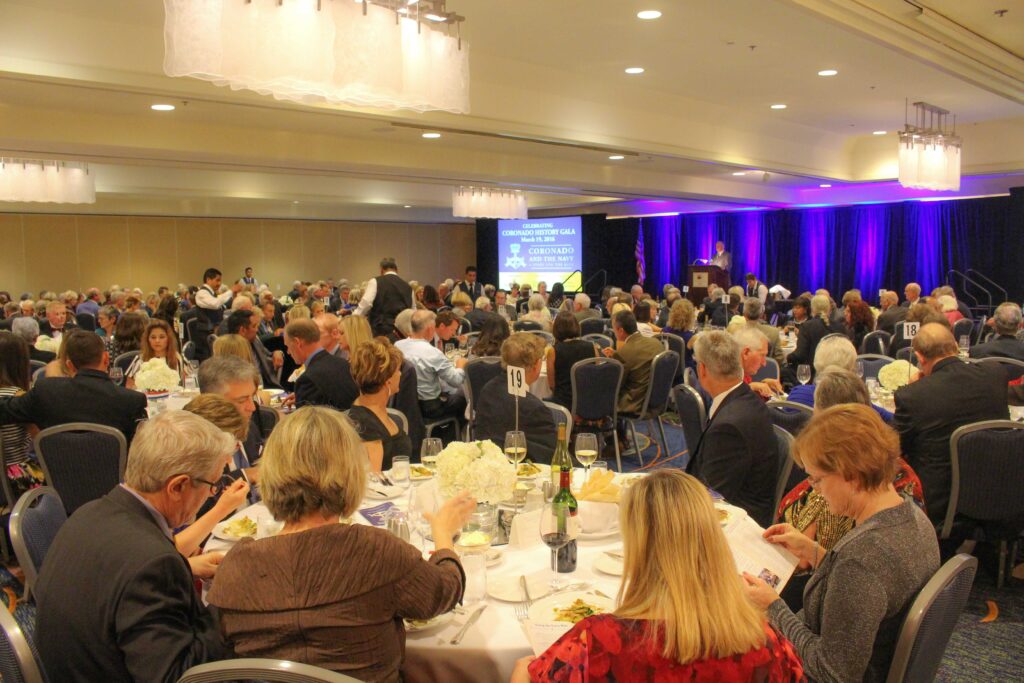 The Master of Ceremonies, Rear Admiral Garry J. Bonelli, who is also a San Diego Port Commissioner, opened up the evening by getting the audience involved. Janet Francis, Communications Director for the Coronado Historical Association expressed CHA’s great appreciation for his important role in the event.

After dinner, Don Budinger, who with his wife Leslie owns 1100 Orange Avenue and are the Historical Association’s largest benefactors, shared his relationship with that particular building.  When he purchased the 1100 Orange Avenue property (shout out to the old Marco’s and the Roman Room for you long-time residents) he asked the City what they wanted in the space. The City identified the need for a museum and the Historical Association was born.

In a great move of philanthropy and love of Coronado, Mr. Budinger announced his gift of the building to the Historical Association during the evening’s presentations. The gift will be transferred in thirteen years or less.

The next amazing moment was when a tribute to Sybil and the Stockdales came from a video message from Arizona Senator John McCain. Mr. Budinger underwrote this video, and Coronado Historical Association Executive Director Bruce Linder worked tremendously hard to have the script written, the images incorporated, and all of the general logistics coordinated. (The video link is at the top of this article.)

After the presentation of the video, a special tribute to the History of Coronado with the U.S. Navy was made.

This was followed by the live auction.

The event had some very special sponsors.  The Hotel del Coronado was a Crown Sponsor and donated a one-year club membership at the Del – valued at $15,000.  The Del also donated a Spa Day for four that included lunch at Sheerwater.

But the most moving donation by the Del was their donation “Magical Night at The Del for 4.” This donation included a private tour with the Hotel Historian, a Sunset Champagne Toast in the Ballroom Turret, and Dinner at 1500 Ocean.

When Del manager Steve Schackne and his wife Celeste saw Taylor and Sid biding against each other for the package, Mr. Schackne, on behalf of the Hotel Del Coronado, was extremely generous and released two packages.

The live auction was followed by a “Raise the Paddle” auction which was led by Mayor Tanaka. Mayor Tanaka announced that for every $200 raised, the Historical Association would send a military child to the Historical Association’s summer camp free of charge.  As you can imagine, the paddles were flying. As a result, 75 children of military families will be attending the CHA summer camp free of charge.

After the auction, the GEM Award was present by Janet Francis, the Communications Director for the Coronado Historical Association.  This year’s honorees were Beth and Chris Kelleher for their fine restoration of 1003 Alameda Boulevard. The GEM Award recognizes the most outstanding historical renovation of a property for the year.

Finally, there was an opportunity drawing for VIP Passes to next year’s Coronado Island Film Festival. The lucky winners were Bob and Gail Bardin.

All in all, it was a spectacular event; one that brought both our Coronado history and our Coronado community together in one place.

Recreation and Golf Services is seeking public input in advance of a comprehensive tennis study the City will soon conduct to better understand how...
Read more
City of Coronado

https://youtu.be/k4xvFRKZ13sThe Aquatics Center has been closed indefinitely. Find out why and how the City is responding to pool users in the latest edition of...
Read more
Military

Coronado's Naval Special Warfare Center made history on July 15th, 2021 as it welcomed its first woman. While her name has not been shared,...
Read more

Annie Buckley, who plays Denise Sanders in the current Lamb's Players Theatre production, Smoke on Mountain, is a senior at Coronado School of the Arts...
Read more
Business

Sadness rang through part of the Coronado community when the "Closed for Business" signs appeared at the sole laundromat in Coronado. The laundromat had...
Read more
Advertisement
Sponsored Partner Links