You Never Know What a Simple Smile Can Do

While having breakfast at Panera’s this morning, an older woman lovingly observing her young grandson caught my eye. Every once in awhile she would look at me and I would smile at her with that affirming “Global-Grandma-Glance” to convey “Lucky You!” (My grandkids live in Hawaii on a Marine base and I miss them.)

Suddenly, she quietly asked if she could share something and then explained that a middle-aged man, sitting in my seat, recently asked her in a despising tone if she spoke English. When she responded “yes” with an accent (she was born in a Middle Eastern country), he told her that “You don’t belong here!” and proceeded to pick up his papers and move to a different table.  Fortunately, a young woman sitting nearby who observed the incident, expressed her disbelief over the man’s behavior after he moved, and not only gave the older woman a hug, she went and bought the child a “sweet” from the counter.

As I learned, this older woman has lived in Coronado for 25+ years, owns a beautiful home, 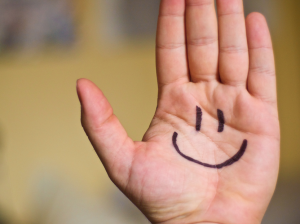 and her grandson attends a well-known private school. Having never been treated so rudely before because of her ethnic background, she was both shocked and saddened. In the span of a few minutes, our hearts met on common ground –- the Golden Rule (Treat others the way you would like to be treated).  Little did I know how much I would gain from giving a simple, free smile this morning — a priceless, mutual hug!