On Tuesday, November 10, 2015 Coronado Middle School and Village Elementary School each hosted a special breakfast for Veterans at their respective schools. With 40 percent of Coronado Unified School District’s student population coming from military families, both cafeterias, decorated in red, white, and blue, were overflowing with men and women who proudly serve their nation today as well as Veterans dating back to World War II.

Amy Steward, a middle school teacher and wife of a retired Navy SEAL, has been organizing the “Take a Veteran to School Day” at CMS for the past seven years. It is evident that teaching patriotism to her students comes from the heart, as she understands firsthand what it means to be part of a military family. She hopes to “help non-military kids understand the sacrifices” made by military personnel and their families. Her students lined the entrance to the school, thanking the arriving Veterans for their service as they greeted them by shaking their hands.

Kevin Shaeffer was a Navy Lieutenant on the morning of September 11, 2001, assigned to the Pentagon, where he worked at the Naval Command Center. Guests at the middle school breakfast, which was sponsored by Time Warner Cable and the HISTORY Channel, watched a poignant documentary of both Kevin and his wife Blanca as they each reflected on the events of that infamous day and the lengthy road to Kevin’s recovery from third degree burns to much of his body. Kevin, who is the organizer of the Veterans Day breakfast at Village Elementary, now works for The Wounded Warrior Foundation. He encourages people to “never forget the service and sacrifice of men and women in uniform.”

Bret Picciolo, Manager of Public Relations at Time Warner Cable, said, “Time Warner Cable is proud to partner with Coronado Middle School and HISTORY to help recognize our nation’s Veterans. This event provides a unique opportunity for students to learn about service and sacrifice directly from our veterans while giving them the thanks they deserve.” Lonnie Allen, also of Time Warner Cable, served in the Navy for 14 years as a gunner’s mate and in search and rescue. He hopes that giving the students the chance to interact with veterans can help those whose parents may be deployed because they can hear veterans’ tales that might make them feel closer to their   own deployed parents.

Captain Stephanie Denius, a Navy nurse, attended both schools’ activities along with her three children, who attend CMS, Village Elementary, and ECDC. Her husband Homer, who is also a Navy Captain, is currently deployed. Stephanie has a unique perspective on military life. She served on active duty, served while part of a dual active duty couple, and now serves as a reservist while her active duty spouse is deployed.

Stephanie says, “Veterans Day is a day to remember and honor all those who have served and protected our country. I am proud to represent the many women, wives and moms, who also serve in the military. I appreciate all of the roles that our military service members and family members play given that I have represented all of them, including wife of an active duty member and mom of military kids. It was an honor to attend the ceremonies, and I truly appreciate that Coronado Unified School District puts so much effort into recognizing the military.” When asked what she was most proud of when it came to the Veterans Day observances, she said, “I was most proud to be with my three children, and was humbled by all the military presence at all three schools as I traveled from Village Elementary to the Middle School and then down to the ECDC. Coronado is such a unique community and is so supportive of the military that it feels like home. It is familiar and comforting to be surrounded by people who understand and appreciate our situation without any conversation.”

After breakfast students went to class, where Veterans served as guest speakers.  The Veterans shared stories of what it meant to them to serve and what it still means to those who are active duty. Gil Nadeau, who served in the Navy during World War II in the Pacific from 1944-1946 and then went on to serve an additional ten years, attended breakfast at CMS, and then went to classrooms, where he spoke to students about his time in the service. He served as a visual signalman aboard an LCS, which at that time stood for Landing Craft Support, and was part of the “Mighty Midgets.” He “loves coming to talk to kids” and remembers with great affection the comradery that he and his fellow crew once shared.

At the opposite end of the spectrum were United States Naval Academy graduates Brittney Young and Shawn Hoch, who graduated less than ten years ago. When asked why they felt it was important to come speak to classes in observance of Veterans Day, they shared similar intentions, wanting future generations to be aware of the career opportunities as well as the opportunities for free education.

In the middle of the generational divide, were dual military parents David and Rachel Oden. David, a surface warfare officer (SWO) and Rachel, a former SWO turned physical therapist, have three children, two of whom attend CMS. They came to talk to students about “protecting the things that we love” and want students to know “that sacrifice is okay” and that the “good outweighs the bad” when it comes to military life.

At Village Elementary Cera Benbow, a Marine Pilot, who serves as the Executive Officer of MWSS 373 out of Miramar, wanted to speak “especially to young girls” about how she is a UH1 helicopter pilot, reminding them that girls can do anything.

After the guest speakers at CMS finished talking to students, they gathered once again in the cafeteria for a group photograph before heading over to the high school football field to watch a parachute jump. Little did the Veterans know, but while they were having their picture taken, CMS students formed a human tunnel that led from outside the cafeteria all the way across the street to the football field. As Veterans walked from the middle school to the high school, they were surrounded on both sides by students who held banners thanking them. Students cheered for the procession of veterans, and many veterans were so touched by the gesture that they began high-fiving the middle school students. High school JROTC students stood in formation and saluted the Veterans before the Veterans stepped onto the field. 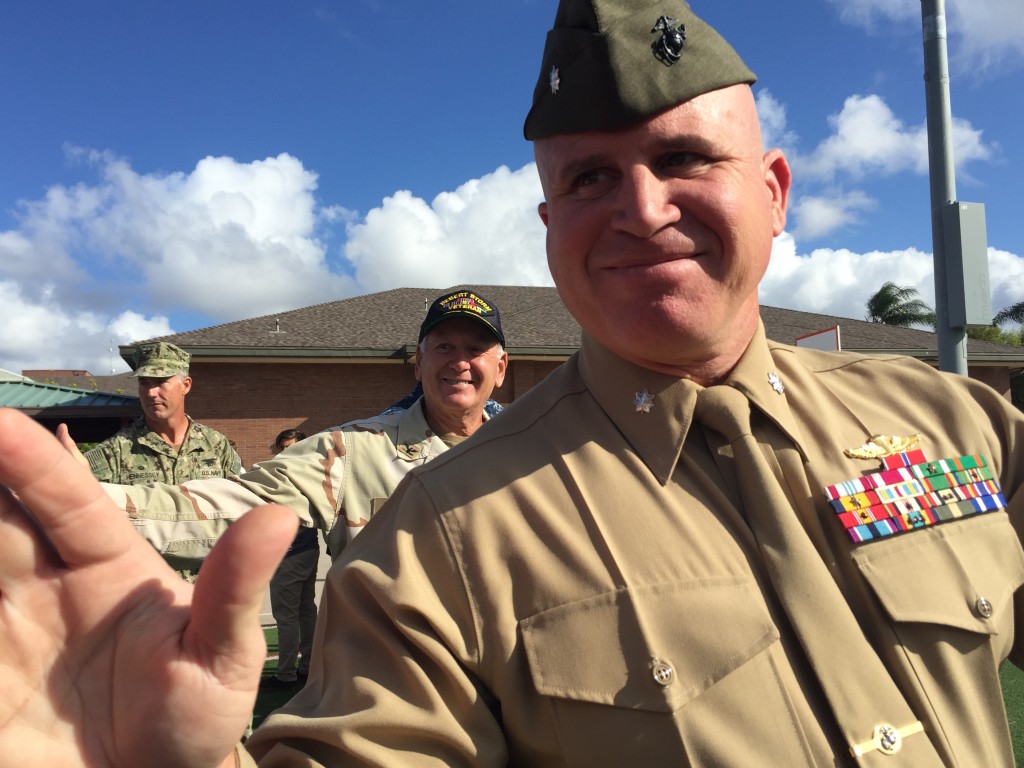 Kevin and Blanca Shaeffer’s daughter Sophia led the crowd, which included Veterans, Coronado High School JROTC students, middle school students, and elementary school students, in the Pledge of Allegiance. The crowd, which had gathered to watch a parachute jump, was disappointed to learn that strong winds would prevent the jump from happening, but the sense of patriotism that filled the air could not diminish the appreciation of our Veterans by those in attendance.