Movie Review: “Ricki and the Flash” Playing at the Coronado Village Theater 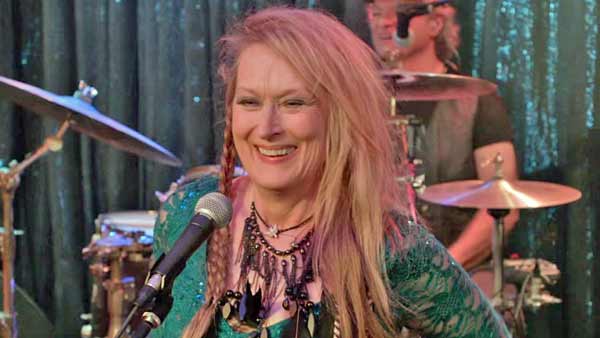 Meryl Streep puts on the performance of a lifetime in this dramatic, feel good film of the summer. Streep delicately balances her persona of Ricki, a wannabe big time musician confined to playing gigs at a local bar as well as being chained to the role of Linda, absentee Mom to three and divorce.

This story addresses the difficulty in not only finding who you are and embracing that person, but also not giving a damn what others think of you. Ricki is well aware of the unintentional pain she caused her family (her husband Pete played by Kevin Kline, her daughter Julie played by Mamie Gummer, her son Josh played by Sebastian Stan, and her son Adam played by Nick Westrate) and although she brushes it under the rug the pain of the past is still evident and very real. Ricki has to face the choices she made in the past, and also battles wanting to be accepted for the her alternative lifestyle while struggling to accept her children and their diverse lifestyles including her gay son, her vegan son, and her suicidal daughter.

Movie goer, Peggy, says that “It was an enjoyable movie with good music but a predictable ending. Meryl gave an excellent performance. I actually like the daughter the best”.

The film is heavy at times but also a lot of fun. Rick Springfield plays Ricki’s boyfriend of sorts, Greg, who is in her band, and Ricki shows the family that through all of their drama there is still a lot of laughter to be had.