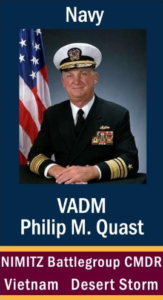 Vice Adm. Philip Quast was a 36-year Navy Surface Warfare veteran and the son, brother, and father of Naval Officers. Having served two tours in Vietnam as well as leading the Nimitz Battlegroup during Operation Desert Storm, Quast distinguished himself as the Pacific Fleet’s first recipient of the “Vice Admiral James Bond Stockdale Leadership Award,” which recognizes leadership proficiency in Command at Sea.

He was the Commanding Officer of USS Benjamin Stoddert (DDG 22) and the Commissioning Commanding Officer of USS Bunker Hill (CG 52). While on Bunker Hill’s initial Western Pacific deployment, he served as Commander of the Battleship Missouri Battle Group and supported Operation Earnest Will — the escort of U.S. flagged tankers transiting through the Strait of Hormuz. During Desert Storm, he commanded the Nimitz Battlegroup, Cruiser- Destroyer Group Three.

Vice Adm. Quast’s personal decorations include: the Legion of Merit with four gold stars in lieu of subsequent awards; Bronze Star with Combat “V” and one Gold Star; Meritorious Service Medal; and Navy  Commendation  Medal. Vice Adm. Quast passed away in 2019 and is survived by his wife of 55 years, the former Peggy Lord; five children, and 12 grandchildren.