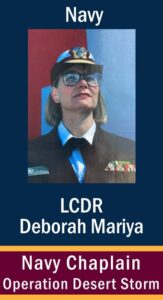 Rev. Dr. Deborah Mariya is a native of Luverne, Minnesota. Called to ministry at an early age, she served with missionaries in Brazil. She graduated from Augustana University and Garrett-Evangelical Theological Seminary.

Following seminary, Mariya was ordained as clergy of the United Methodist Church. For 10 years, she served as a pastor of churches in Iowa, during which time she joined the U.S. Naval Reserve. Mariya was called to active duty in 1990 immediately prior to Operation Desert Shield/Desert Storm as command chaplain of USS Cape Cod (AD-43), deploying to the Persian Gulf. Traveling by helicopter, she conducted divine services and counseling throughout the Fleet at sea and ashore in the theater of operations.

Following liberation of Kuwait, Cape Cod was diverted to provide disaster relief in the Philippines during the eruption of Mount Pinatubo.

Chaplain Mariya made a second deployment to the Persian Gulf and then was assigned to National Naval Medical Center in Bethesda, Maryland, where she was, among other duties, chaplain of the oncology ward and conducted Protestant divine services.

Additionally, Mariya was chaplain of the hospital ship USNS Comfort (T-AH-20), deploying to Haiti during the U.S. intervention in 1994.

Returning to the West Coast, she served as squadron chaplain of Amphibious Squadron Three (PHIBRON 3). This was the first period during which she lived in Coronado. Moving ashore to Naval Station San Diego, she was the lead chaplain of the Consolidated Chaplains Assistance Team, providing assistance to families of deployed crews.

Transferred once again to the Washington, D.C., area, she was pastor of the Navy Chapel located at the Naval Security Station. Additionally, she served at Naval Support Facility Anacostia and Arlington National Cemetery.

Following naval service, she completed her doctorate of Divine Ministry at Wesley Theological Seminary, Washington, D.C., and served as pastor of the United Methodist Church in Chicamuxen, Maryland.

After residing in Waldorf, Maryland; Athens, Greece; and Arlington, Virginia, she returned home to Coronado. She is mother of Mercy M. Tangredi, a Coronado High School graduate and freshman at the University of Hawaii at Manoa, Honolulu.