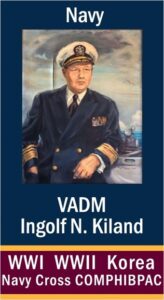 “Shake the hand that shook the hand of Teddy Roosevelt,” is how he always introduced himself.

Born in Sioux Falls, South Dakota, in 1895 into a Norwegian immigrant family, Ingolf Kiland met Teddy Roosevelt as a child while attending a campaign rally at the famous Corn Palace. He grew up on the shores of Lake Michigan in Manitowoc, Wisconsin.

Kiland attended the University of Wisconsin for one year before transferring to the Naval Academy. He graduated early in March 1917, to join U.S. forces fighting in World War I. He first served as a navigator — before radar — on one of the first oil-burning destroyers, USS Sterett (DD-27) and he took the first U.S. Navy ship, the destroyer USS Elliot (DD-146), up the Yangtze River in China in 1920.

Between world wars, Kiland studied ordnance engineering at the Naval Postgraduate School in Annapolis and earned a master’s degree at Columbia University. During the Battle of Guadalcanal in 1942, Kiland was awarded a Navy Cross, the service’s highest decoration for valor after the Medal of Honor, as commanding officer of troop transport ship USS Crescent City (APA-21). His citation says, “Captain Kiland maneuvered his unit with such outstanding courage and tactical ability that he not only brought his forces through without damage but successfully repelled the enemy attack.” Crescent City shot down five Japanese torpedo planes that night. As a rear admiral, Kiland and his amphibious task group took the Japanese-held island of Karama Retto, routing out the suicide boat caves scattered on the island and ensuring it could be used as a support for the ensuing assault on Okinawa.

During the Korean War, Kiland was commander of all amphibious forces of the Pacific Fleet. After his final tour as the commandant of the Fifth Naval District in Norfolk, Virginia, he retired in 1957 as a vice admiral. He and his wife Isabel retired to their home in Coronado, where they lived until his death in 1992. He had one son, a retired Navy captain, two grandchildren — one of whom also served in the Navy, and four great-grandchildren.