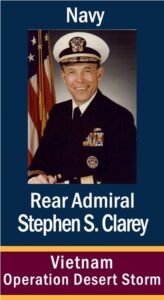 Written by The Clarey Family

Rear Adm. Stephen Clarey was born in Honolulu in 1940 into a Navy family, the son of the late Adm. Bernard A. Clarey and Jean Scott Clarey. He and his mother, who had lived in Coronado in the 1920s and 1930s, arrived in Coronado in 1942 shortly after the attack on Pearl Harbor, where they spent the rest of the war. Clarey attended Miss Bunny McKenzie’s nursery school in Coronado, which she, in a congratulatory call many years later, credited to his becoming a Navy flag officer. Growing up, he led the life of a typical service junior, attending 13 schools, including Sacred Heart and Coronado Middle School, before graduating from the Punahou School in Honolulu and later Williams College and Harvard Business School.

Clarey joined the Navy two weeks after graduating from Williams and received his commission from Officer Candidate School in Newport, Rhode Island. His initial sea duty was in destroyers, and he made two deployments to the Tonkin Gulf during the Vietnam War. While providing naval artillery support to the Marines and Army forces near the demilitarized zone, his ship came under fire repeatedly from North Vietnamese shore batteries.

In addition to multiple tours in the Pentagon in Navy strategic planning and financial management, Clarey had four commands at sea. As a flag officer, he deployed twice to the Persian Gulf during the first Gulf War. He commanded the U.S. Maritime Prepositioning Force during Operation Desert Shield. Deploying from the West Coast again in December 1990, he commanded the Pacific Fleet/5th Marine Expeditionary Brigade Amphibious Task Force of 18 ships and more than 7,000 Marines. In February 1991, those Marines were offloaded in northeast Saudi Arabia where they joined in the coalition ground campaign in the liberation of Kuwait during Operation Desert Storm.

Clarey has been active in community and civic affairs since retiring from the Navy.  He was president of the San Diego USO and helped establish the permanent USO reception center at the San Diego International Airport. He is a longstanding member of the Executive Committee of the University of California, San Diego, Osher Lifelong Learning Institute, and oversees the curriculum and marketing programs.