This year Memorial Day services will take place at Star Park, Monday, May 30, at 10 am. The public is invited to attend.

Memorial Day observance has been a tradition in Coronado since the Great Depression. Organized annually by the Veterans of Foreign Wars (Coronado Post 2422), it has become a rallying point for servicemen and their families, young veterans and old warriors.

Locally, past Memorial Day services have been attended by thousands of Coronado residents, whether directly or indirectly affected by tragedy or loss.

This somber ceremony strikes deep at the heart of our community. “That should come as no surprise,” said Post Commander Chuck Lucas. “We live in a veteran-driven community here in Coronado. The VFW has become a huge part of Coronado history and tradition. In return, the support we have received for our efforts has been phenomenal.”

Indeed, VFW Post 2422 is involved in numerous community events throughout the years that have included Memorial Day, Avenue of the Heroes and Take A Veteran to School Day.

They have sponsored athletic teams, surf contests and individual athletes in need. The Post also sponsors Concert in the Park steak dinners, July Fourth events and Christmas celebrations. During the Great Depression they began hosting Christmas and Thanksgiving dinners for our servicemen and women who were away from their families. That tradition continues today.

There is also a Memorial Wall at Post 2422 where families can honor their beloved veterans on bronze plaques. Currently on the Memorial Wall are local veterans such as General Styer, Admirals Martin, Stockdale and Edney, and others. Duncan Hunter and Medal of Honor recipient John Finn are also represented on the Memorial Wall. Additionally, there are numerous members of the UDT and SEAL Team, who occupy their own honored section.

In 1932, in the middle of the Great Depression, more than 100 members of the Coronado community signed a petition to be granted their own chapter of the Veterans of Foreign Wars, Coronado Post 2422. A month later the VFW Auxiliary was founded.

The Veterans of Foreign Wars nationally was established in 1899. It was formerly reorganized in 1913 as a series of mergers between previous veteran organizations serving the Spanish-American War and the Philippine Insurrection.

The purpose of the VFW is to aid in rehabilitation of this country’s disabled and needy veterans while promoting American pride through education, patriotism and constructive service to local communities.

“We started out meeting at the Coronado First Baptist Church,” said Chuck Lucas. “It was a small group in 1932 with maybe 25 attending that first meeting.”

Those founding members included pilots stationed at Rockwell Field on North Island (a former US Army Air Corps military airfield), sailors off the four-stack destroyers, and even veterans of the Curtiss School of Aviation.

The only rule for membership was that you had to have been in a combat situation or seen combat overseas. It was originally a men’s-only membership. Women were allowed to join the VFW in 1946.

Today Post 2422 operates out of their facility on Orange Avenue near the corner of Sixth Street, on what was initially three lots of property deeded to the VFW in 1952 by the family of General Henry D. Styer (valued at about $12,000 at the time). The post carries his name to this day, and is home to both the VFW and the VFW Auxiliary.

At that time, the old WAVE barracks sat on the recessed side of First Street, alongside San Diego Bay. WAVE stands for Women Accepted for Volunteer Emergency Service in the US Naval Reserve.

The Post was able to acquire one of those unfinished pine buildings, and it was slowly moved to its current location at 557 Orange Avenue, where it became, and remains, General Henry D. Styer VFW Post 2422 – truly one of the most historic buildings on the island.

Throughout the year, hundreds of events take place at the facility on Orange Avenue – weddings, retirement ceremonies, birthdays, fundraisers, parties, club events, luncheons and dinners, and more. The building contains a kitchen, canteen and meeting hall, as well as a large grassy area in front of the building.

Memorial Day ceremonies take place at Star Park, Monday, May 30, at 10 am. The public is invited to attend. Photo courtesy VFW Post 2422.

Joe Ditler is a frequent contributor to Coronado Times. Through his promotions company, Part-Time PR, he has served businesses throughout Coronado and San Diego for many years. For more information reach him at [email protected] or 619-742-1034. 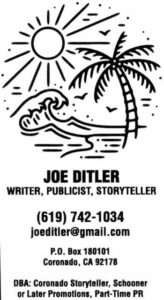