New to Coronado ~ Beyond Surf SD Stresses Understanding the Ocean

“Surfing is more than knowing how to get up on a board,” shares former pro surfer Jake Halstead as his Beyond Surf SD opens in Coronado for surfing lessons starting April 8 on Fridays, Saturdays, and Sundays. Coaching will then transition to five days in June for summer, with lessons typically one and a half hours, from 9 am to 5 pm. He is pleased to bring his unique coaching style to Coronado, after obtaining a business permit, and following a presentation process through the city. He chose Coronado for the variety of local surfers, tourist opportunities, and the amazing beach where the waves are perfect for beginners.

He started his company, Beyond Surf SD four years ago, with the first two years part time and then shifted into full time for the past two years. The pandemic was an unexpected blessing to grow his business, because people started focusing on outdoor activities with more flexible schedules working from home and he was able to expand his company.

One of his most memorable surfing memories was at age 16 in New Zealand, competing with the USA surf team. “It all comes down to the last 20 minutes,” he reminisces, recalling that it was so windy that he couldn’t hear the announcer and thought he had come in last of the final four contestants. Afterwards, sitting alone on the beach bummed out, he was overcome with emotion when his coach came over with an American flag and told him he had come in second.

Just a month later, he turned pro, with his first stop in South Africa sponsored by Billabong. He competed all over the world on the pro circuit until his early 20s when a knee injury sidelined him, and he lost his sponsorship. At that point, he was lost and needed to find his way. It turns out his passion was still surfing, but not only catching waves himself, but also teaching others to learn and realize their potential.

He began coaching when word of mouth referrals started and also has interest from Instagram, with his 25,000 and counting followers. “Being able to share my knowledge with people and watch their skill levels go up has changed my life,” he comments. He now feels grateful to be part of a team who share a passion for the ocean. Beyond Surf SD works with all levels from pre-beginners, who are afraid of the water, to professionals who want to hone their skills, and everyone in between. He also trains other professionals, as well as a surfer who went to the Olympics.

Halstead’s unique coaching style goes well beyond what typical surfing instructors offer. He has found that many people don’t know much about the dynamics of the ocean. He feels that to be a better surfer, it is important for safety to know why and how the waves and currents pull, the effects of the wind direction, weather, and other factors that work together in the ocean.

A typical Beyond Surf SD lesson starts with checking in and getting the proper fitting wetsuits and surfboards, and then continues with a beach warm up, where participants learn surfboard position and pop-up techniques. With an ocean education lesson next, participants are then ready to enter the water, where they are coached and critiqued, and receive full energy hoots, hollers, and shakas. The coach to student ratio is a maximum of five to one, with a cost of $100 per person, and private lessons also available. Photos on the beach and in the water can also be requested for an additional cost. The majority of students are families and groups, and Beyond Surf SD also hosts a monthly women’s clinic. He finds that “it’s more fun to surf with friends that saw you catch an amazing wave, and you can grow together.” One of his students Rose shares, “Taking lessons from Jake is such a fun and enjoyable experience. I get to learn how to improve my surfing, as well as learn about the ocean, waves and all of the elements that make surfing such a unique sport. With a few changes, Jake got me up on my board and riding better than ever.”

Beyond Surf SD also offers two-hour video review coaching sessions tailored to intermediate surfers who can adeptly paddle out and want to work on their technique and form. After catching some waves, the coach and surfer sit down on the beach and critique the footage looking at timing, positioning, and riding the waves.

La Jolla’s Windansea is Halstead’s favorite local spot to surf, because he grew up near there and can’t complain that it offers good waves 360 days a year. For international waters, he likes the amazing, but cold, waves in South Africa with its raw coastline. He also appreciates the crystal clear warm swells, along with the friendly people, in Tahiti.

“I was born and bred to be a surfer with a family who surfed,” he says, but notes that surfing can be a selfish, often lonely individual sport, where you have to push others aside to win. That’s one of the reasons he builds relationships with his clients, many of whom have become friends during their weekly sessions. He treasures the support of his family and credits his Dad as his best coach, but it took him until the age of 23 to realize it. His life has now come full circle, as he is introducing his three-year-old son to the water.

Halstead is also the director of the annual WindanSea Menehune Surf Contest, which was ironically the first surf contest he entered and won at the age of eight. “The ultimate reward for me now is watching someone do their first maneuver or a more radical trick,” he comments. Fellow pro surfer Warren Zventina, who has been friends with Halstead since the age of three, is the Beyond Surf SD manager for Coronado. Their tent will be located at the end of Avenida del Sol, just south of The Del.

Check out Beyond Surf SD as it lands on the beach in Coronado at www.beyondsurfsd.com, or on Instagram @JAKEHALSTEAD-BEYONDSURF_SAN DIEGO, or call 858-263-8787. 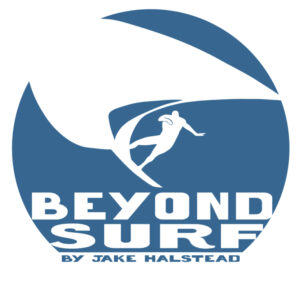