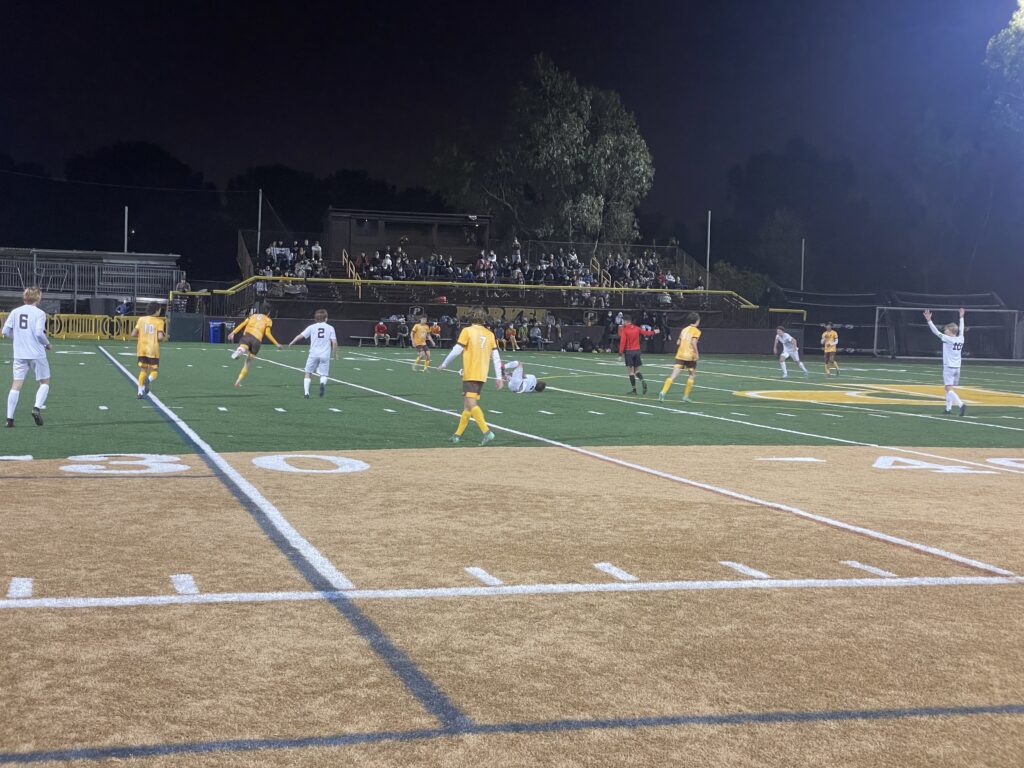 At this point one thing is for sure, if you attend an Islanders Men’s Soccer game, you’re going to be treated to a show, and Friday night’s 5-4 over Francis Parker was no exception.

Both teams came into the match riding high on four-game winning streaks and looking to add another signature win to their resume.

In the early minutes of the match, the Islanders looked a tad sluggish and lacked focus. Nothing too substantial, but you could see the Islanders were just slightly off in their control of the midfield, passing, and overall communication.

“We got off to a bit of a slow start, but I’m thrilled with how the boys battled back. Every punch they threw we had a counter to answer for,” said Islander Head Coach Aaron Brooks.

However, those early mishaps were quickly swept under the rug thanks to a fantastic long-range goal that would give the Islanders the 1-0 lead in the 14th minute.

But the momentum shift was relatively short-lived. Over the next 10 minutes, Francis Parker responded with two goals of their own. Both goals came off crosses in which Francis Parker had a three on two due to some minor miscommunication on the backline.

While the two goals were a setback for the Islanders, they seemed to wake up the Islanders. Over the finals 21 minutes of the first half, it was all Islanders as they would live in the Francis Parker end of the pitch.

They fired three shots on goal, from Connor Buckley, Dylan Groeneveld, and Garrett Sauter. While none of the shots found the back of the goal, one could tell that it would only be a matter of time until the Islanders found pay dirt in the second half.

Out of the half, the Islanders kept the attack high, and just five minutes into the second half found the counter punch they were looking for, thanks to a fantastic finish off a corner from freshman Aiden Trieschman tying the game at 2-2.

“Aiden was bigger for us tonight than you could imagine,” said Aaron Brooks. “ These were his first minutes on varsity, and he’s going up against D1 level players, so for him to score a goal and draw a PK, he played out of his mind.”

Yet Francis Parker would refuse to give in, as in the 60th, they would again respond to retake the 3-2 lead.

Down 3-2 in the 65th was the latest the Islanders had trailed in a game this season. Seeing as they have been so dominant, it would be interesting to see how they would respond. The answer? They’d punch right back.

Over the following 10 minutes, the Islanders’ attack would play pissed off as they scored three goals, each just as impressive as the last. The first came from Fodrey, in the 66th, he headed one into the back of the net, tying the game at 3-3.

But the senior wasn’t done yet as Fodrey finished off a fantastic pass in a two on three break from Buckley just two minutes later. Not only making it a 4-3 Islander lead but finishing off what has to be one of the finest goals in the county this year.

For good measure, the Islanders would add one more goal thanks to a converted penalty kick by Dylan Groeneveld to make it a 5-3 game with eight minutes to play.

“The three of them (Buckley, Fodrey, Groeneveld) click so well up there,” said Brooks. “Often times teams try to take away your best player on the attack, but it is hard to defend when you can go to the left, the right, or the center and attack them with pace.”

Francis Parker would add one more goal of their own to make it 5-4, but the Islanders backline of Dylan Noble, Jack Hunt, and Conner Mattick, and goalie Tony Miley would do a fine job of closing down the game and securing the 5-4 win for the Islanders.

The Islanders will return to action this Wednesday, January 12th, when they take on  Scripps Ranch High School.