David Mirisch, “The Man Behind the Golden Stars” to Attend Film Festival for Documentary Screening

With a career in the entertainment industry spanning more than 40 years, David Mirisch’s extraordinary life and enormous contributions to charities has been documented in a film that will be shown during the 2021 Coronado Island Film Festival (CIFF) on Sunday, November 14.

David Mirisch, The Man Behind the Golden Stars is a feature documentary about the life of revered press agent David Mirisch, known as The Man with the Gold Rolodex. This documentary exposes the Golden Age Era of Hollywood and what it really took to create a star then and now.

An added bonus, Mirisch will be in Coronado for the festival and will also present his family’s production of Some Like It Hot at the CIFF traditional showing of the film at the Hotel Del Coronado Sunday evening.

Mirisch is the president of David Mirisch Enterprises, an international promotional firm that has produced over 2,500 celebrity fundraising events, including more than 200 golf tournaments, 150 tennis tournaments, 50 skiing events, and others spanning softball, horseback riding, fishing, bowling, casino parties, dinner galas and variety shows. With his wealth of connections in Hollywood, Mirisch encourages celebrities to attend these non-profit events which helps to raise even more money for the sponsoring charities. In all, Mirisch’s firm has assisted in raising more than $35M for charities of all kinds. His events have been held all over the world in locations including the United States, Canada, Mexico, Japan, Indonesia, Malaysia, Ecuador, and the Bahamas.

“David Mirisch Enterprises (DME) is the country’s preeminent producer of celebrity fundraising events. By booking celebrities to attend non-profit events, it helps raise money for local, national, and international charities in many ways. During the past 30 years, DME has organized over 2,500 celebrity charity events which have generated over $35,000,000 worldwide.”   ~ DME website.

The Mirisch Corporation, and independent film production company founded by Mirisch’s uncle Walter Mirisch, has produced 72 feature films, been nominated for 84 Academy Awards, won a total of 28 Academy Awards, including three Best Picture Awards. Some of the classically acclaimed films produced by the Mirisch family are Some Like It Hot, Moby Dick, West Side Story, Fiddler on the Roof, The Great Escape, The Pink Panther, In the Heat Of The Night, Midway and The Magnificent Seven.

In 2017, Mirisch’s autobiography “The Man with The Gold Rolodex: PR to the Stars” was published — in summary: “The David Mirisch story is a story of a man who built bridges in Hollywood, bringing more stars together (even creating some of them) than anyone else before him. From America to China, David’s honesty and attention to detail became a magnet for the hottest stars in Hollywood. What stars loved the most, however, was the trust they could place in his hands. David’s legacy lies in the personal relationships he held with his clients, showing they always meant more to him than where they originated from – his gold rolodex.”

Now residing in Montana, Mirisch had lived in Carlsbad and Encinitas for 17 years and is looking forward to his visit to San Diego and the Coronado Island Film Festival. The documentary about his life and charitable contributions will be screened on Sunday, November 14 at 1:30pm in the Library’s Winn Room. And then at 5pm that same day, Mirisch will be at the Hotel del Coronado to present the screening of Some Like it Hot. 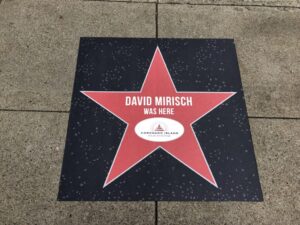