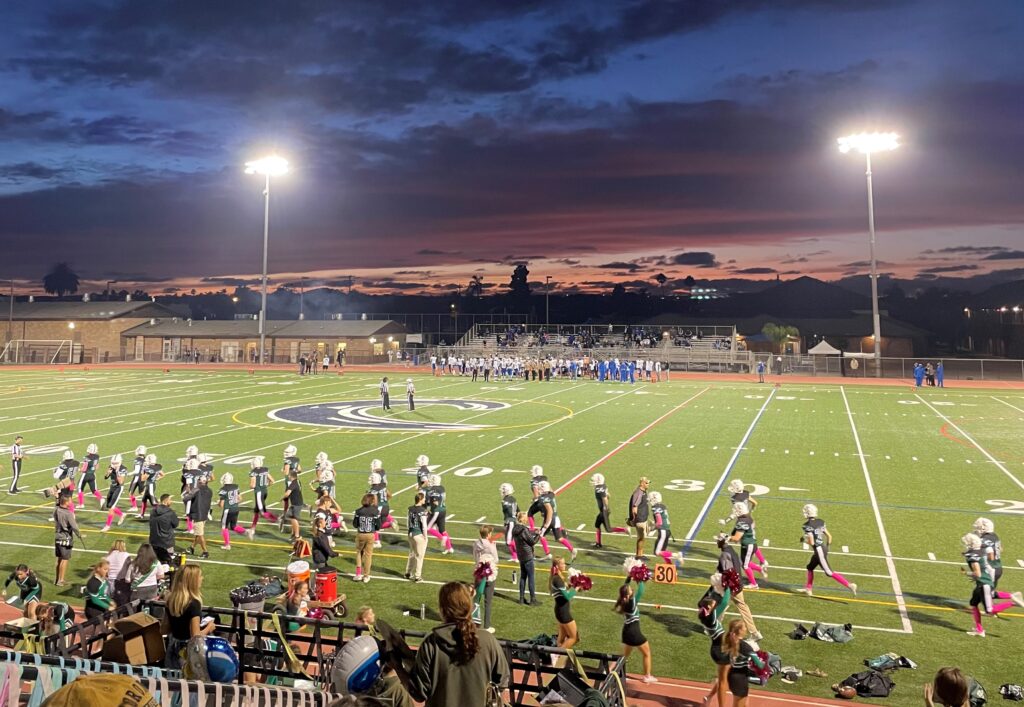 What do you get when you combine your first league game of the season, your homecoming game, and an opponent with a 5-1 record? The answer…the Islander football team’s biggest game of their 2021 season.

The atmosphere was perhaps the most electric of any Coronado home game this season, as the stands were packed with green, black, and white ready to explode at the sight of Islander touchdowns.

However, it was simply not meant to be for the Islanders Friday night as they were defeated by the Cavers of San Diego High School 56-14.

The game didn’t have the feel of a blowout early, as Coronado’s first two plays from scrimmage would move them to the Cavers 33-yard line, thanks in large part to the hard running of Zane Delcore.

But all Islander momentum was stopped on a first and ten when QB Hudson Herber was intercepted by a Cavers DB who returned 77 yards for a pick-6, giving San Diego the early 7-0 lead.

Coronado would eventually find themselves down 13-0 at the end of one after a 70 yard TD run by San Diego.

But Coronado would strike back in the second. Following a nice Islander defensive stand, thanks to solid push upfront from JT Nelson and Finley Alexander, Coronado would force a San Diego punt, and the Islanders would block and recover at the Cavers 16-yard line.

And it would not take long for Nado to cash in, as Zane Delcore would follow his blockers and take it for the 16-yard TD and make it 13-7 with 11 minutes and change to play in the second.

The Cavers would respond with yet another long touchdown run to make it a 19-7 game. But Coronado would not go away. On their following drive, Coronado marched to the Cavers 40 and then quickly hit a long pass from Herber to Donny Couts for 32 yards to make it a goal-to-go situation.

And the Islanders would quickly cash in on their red-zone opportunity as two plays later Delcore would again punch it in from three yards out to make it a 19-14 game.

However, this would be the closest the Islanders would get for the remainder of the night. Coronado simply could not stop the run. All told the Cavers would have 493 yards on the ground on just 24 carries. Good enough for 20.5 yards per carrying. With 282 of that yardage coming from Cavers lead back Thomas Jones.

Coronado would have its moments in the second half, like a pair of long passes from Herber to Couts, a long rung by Graham Bower, and even forced a pair of turnovers. But Coronado could not put the whole puzzle together.

“They were big, fast, and physical,” said head coach Kurt Hines. “We knew they would be fast from the film, but they (San Diego) were on another level when we took the field. We just had too many small errors, liked missed assignments, dropped passes that really hurt us, and didn’t let the offense click.”

Perhaps a major reason for Coronado’s tough outing on Friday could be attributed to the team having three weeks off before the game vs. San Diego, as their last game was nearly a month prior vs. Kearney on Sept. 17.

“It was something we actually talked about in our coaches meeting Friday,” said Hines. “We don’t want to ever make an excuse, but I would say that all that time off did not help us.”

I asked Coach Hines what his message has been to the team following last week’s loss, and he told me, “I’ve just been telling them what defines you isn’t the single loss, it’s how you bounce back and how you keep showing up and how you keep fighting. We just have to have a short memory, win or lose, and move on.”

And the next team up won’t be any easier as the Islanders will travel to Patrick Henry High School to take on the 5-2 Patriots. It will be a match-up that will have a familiar feel, as on Friday night, standing on the opposing sideline as the Patriots Head Coach will be former NFL QB and current Coronado Resident J.T. O’Sullivan.

“Patrick Henry is another very talented team. On offense, they run a no-huddle and use a lot of motion and motion plays, and on defense, they are big and love to hit. We’re gonna have to be ready.”